Joseph Kony, leader of the rebel group the Lord's Resistance Army makes a rare statement to the media during peace talks on Aug. 1, 2006 on the Congo-Sudan Border.
Adam Pletts—Getty Images
By Aislinn Laing/Gulu, Uganda

In a mud and thatch hut on the edge of a city slum in northern Uganda, Lily Atong sits waiting for her husband to come home to help her care for their children. Atong has sevenchildren aged three to 17 and no income save for the money she makes selling handbags woven from red string and soda ring-pulls. As a result, she struggles to pay even basic school fees or provide her children with clothes.

Kony has spread terror across vast swathes of central Africa, torturing, abducting, raping and forcing children to fight its pointless war for more than 30 years.

Over the past ten years, Kony and his ragtag army have been chased from their base in northern Uganda where he sought to create a quasi-religious state into the Democratic Republic of Congo and a remote area of South Sudan by African Union soldiers and U.S. Special Forces troops.

On Thursday, one of Kony’s once most trusted commanders, Dominic Ongwen, will face 70 charges of war crimes and crimes against humanity at the International Criminal Court in The Netherlands, a court set up in 2002 with aim of helping countries to bring to justice perpetrators of the most vile acts where there were no facilities to try them in their own countries.

Ongen, known as the White Ant is accused of orchestrating massacres in at least four refugee camps during his time with the LRA. He handed himself in last December after falling out with Kony. More than two thousand victims have signalled their intent to the ICC to participate in his prosecution.

But despite the resources poured into the hunt for Kony, the ICC’s most wanted man, he remains at large with a diminished band of just 120 fighters.

Evidence to the House Committee on Foreign Affairs by the Enough Project in September last year suggested his fighters are poaching elephants in the DRC’s Garamba National Park to buy weapons and uniforms for its soldiers.

Ofwono Opondo Ogaldin served with the LRA for 27 years after being abducted from his home aged 10 and escaped last year. He believes Kony will never give up fighting or hand himself in. “He will continue fighting but he has no real power now,” he says in the garden of a hotel in Gulu, northern Uganda.

In a region still badly scarred by decades of war and atrocities, opinions are divided about the way to move on and whether the ICC or the Ugandan government is best-placed to decide how to help people heal.

Many feel strongly that Ongwen, a former child soldier himself, should not be prosecuted but instead sent home to benefit from a government amnesty offered to other former LRA soldiers. Among them is Alfred Arop, a former bodyguard to Joseph Kony, who said that the ICC is prolonging the demise of the LRA by trying to prosecute its commanders. “The ICC cannot stop the war. It will make the war continue because there are some people who have been abducted against their will but are given the post and rank of commander,” he said. “That’s not their will. That’s not their will but if they think they have to pay they will never stop fighting.”

Others are more practical about the necessity for LRA commanders to be punished when there are more pressing needs at home. Prisca Lanyero, one of scores of “bush wives” who was given to Ongwen when she was aged 12, scrapes a meagre living by selling charcoal. She believes society needs the LRA men to provide for their families more than it needs justice. “We face a lot of problems in the community. You get married but when they know your background, that you were LRA and you come with children, they abandon you,” she says. “Most of our children are on the street now, not going to school because we cannot pay for them to go to school. To me I would say it was better if Dominic was just around and was going to stay home because he should take care of his children.”

Lanyero and Atong were among hundreds of women who were abducted to serve as wives to senior LRA commanders and returned home with offspring who are frequently called “Kony’s Children” and shunned by their communities. Some are physically handicapped because of injuries they suffered while in captivity, others have post-traumatic stress because of the horrors they experienced and all have missed out on years of formal education.

Janet Arach, from Watye Ki Gen, a charity working to rehabilitate communities torn apart by the LRA, says in an area where families have lived on the same land for generations, those displaced by conflict and shunned when they come home represent a ticking time-bomb without better support. “These children are growing up very bitter, they want to know their identity,” she says. “They live in rented houses and they don’t know their families. Particularly the boys, they want to know their father.”

Lily Atong was first rescued by Ugandan troops in 2005, recaptured by Kony in 2006 before finally escaping with her children in 2007. She describes a man who was mostly kind to his scores of bush wives and who is tired of war but too scared to give it up.

She wears an ICC t-shirt with the slogan To Me, Justice Recognises Suffering, given to her, she says, by a team of investigators who visited her last year.

Despite Kony’s crimes against her and other Africans, Atong wants him back in Uganda rather than in a European cell like Ongwen. “I feel that he should come back but not to me, he has many children, let him come and protect these children, care for these children because these children are suffering so much,” she says. 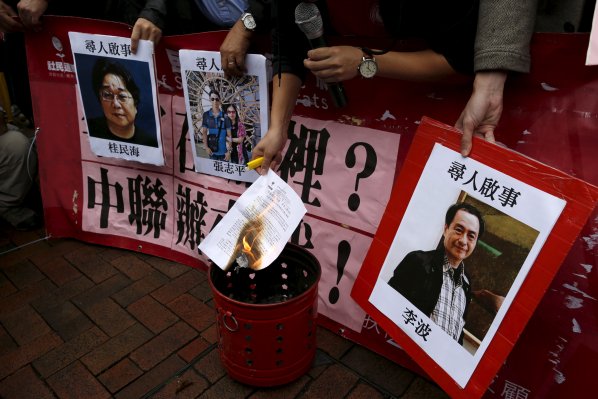 Is China Kidnapping Its Critics?
Next Up: Editor's Pick