Amy Schumer arrives at the The 21st Annual Critics' Choice Awards at Barker Hangar in Santa Monica, Calif., on Jan. 17, 2016.
Steve Granitz
Ideas
By Josh Levs
Josh Levs is the author of All in: How Our Work-First Culture Fails Dads, Families, and Businesses–And How We Can Fix It Together.

On its own, it wasn’t worth all the attention it got. Amy Schumer called out what she felt was a teen’s sexist tweet, he apologized, she accepted, and it was over. But it’s a teachable moment for dads and sons.

In case you missed it, 17-year-old Jackson Murphy, who runs the website Lights-Camera-Jackson, tweeted a photo of himself with Amy Schumer and joked: “Spent the night with @amyschumer. Certainly not the first guy to write that.” She responded: ““I get it. Cause I’m a whore? Glad I took a photo with you. Hi to your dad.” He then deleted the tweet and apologized, saying it was a failed effort to be funny. She forgave him.

The online reaction was mixed. Some praised her for calling out sexism. Others slammed her as a hypocrite. But we should all understand why Schumer responded as she did, and why so many people supported her.

For example, Miley Cyrus is regularly slammed for leaving her Hannah Montana image behind and being overtly sexual in her performances. Meanwhile, fellow Disney alum Nick Jonas showed more skin and posed just as provocatively in a photo shoot, but compared to Cyrus he somehow seems to maintain a squeaky clean image.

Any remark about a woman’s sex life can evoke this double standard. Joking that a woman has a lot of sex partners may be meant as harmless, but it has a context. So while Murphy clearly meant no offense, it’s important to understand why Schumer would respond quickly.

With her words, she helped him—and others—see that his joke, even unintentionally, could easily contribute to the problem. When she talks and jokes about her own sex life, there’s no suggestion that she’s giving anyone the power to judge her, or caving to the double standard. When someone else makes a comment, it can come across as unfair, intrusive judgment.

Good comedians push boundaries and get people thinking. And Schumer did that here. The next step is for more of us to talk about this situation—and that includes dads, and all parents, with our children when they’re old enough.

My kids are too young for this specific talk, but I’m already very conscious of teaching them to avoid double standards, which also hurt men. It’s where my battle for paid family leave and reasonable policies comes from. It’s what All In is all about.

I work to make sure my kids understand that men are just as capable at home, and women are just as capable in the workplace. I try to show them that it’s worth fighting prejudiced assumptions about people, even when they’re deeply ingrained in our culture. And I hope that, when it’s time, I’ll be able to help them understand this basic idea: Many people might judge men and women differently for making the same choices in their sex lives. And it’s important to stand up against that any time you see it. 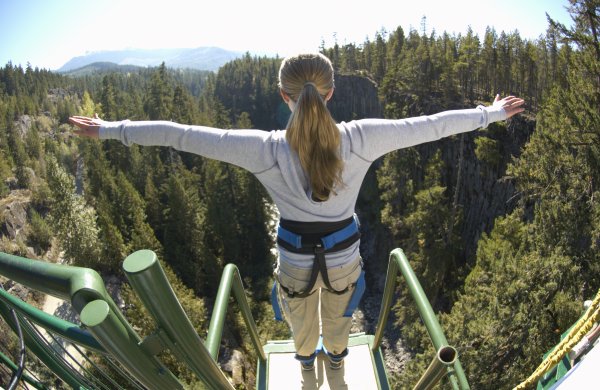 How to Talk to Your Kids about Taking Risks
Next Up: Editor's Pick