Restricted Abortion Rights Are a Calamity for All Women

This week, we commemorate the 43rd anniversary of the landmark Supreme Court decision Roe v. Wade establishing the legality of abortion in the U.S. As we anticipate what may be another pivotal Supreme Court decision on abortion this year, it’s valuable to reflect on the history of the injustices regarding women’s status, the legal and policy developments that led to this critical ruling, and the parallels between 1973 and the efforts to safeguard women’s reproductive justice today.

The court’s legalization of abortion marked a critical turning point for women’s equality and self-determination. Yet, as we have seen over time, the decision did not address the multiple issues and demands pregnant women face. And since 1973, new issues have arisen. Today, where a woman lives determines her access to abortion services, and states mandate whether she is required to have (and look at) an ultrasound beforehand, whether she must obtain parental consent, whether has the right to have a medical abortion, among other conditions.

Wherever she lives, she has to assess the political and economic environment into which her child would be born, as she decides whether to continue her pregnancy. She has to consider who is defined as a legitimate mother in the U.S., whose children have value, and whose do not. These conditions of pregnancy and childbearing undermine the possibility of dignity and safety for millions of women today.

Most Americans are unaware that abortion was generally legal in the U.S. until the mid-19th century; ending a pregnancy was a woman’s prerogative until she, herself, reported having felt fetal movement. When physicians led the fight, statehouse by statehouse, to criminalize abortion, they argued that this was a strategy for protecting women’s health, obscuring the fact that abortion was no less safe than other medical procedures in that era before antibiotics. Physicians were also concerned about establishing their own professional standing as superior to midwives and untrained folk practitioners.

Some feminists opposed abortion largely because of its association with a woman’s loss of “chastity.” When women persisted in seeking abortions after it was criminalized, prosecutors did not generally accuse providers on trial in courtrooms around the country of killing babies; they accused them of murdering motherhood, interrupting the fulfillment of women’s destiny as mothers.

Today, to a surprising extent, women in the U.S. still have sexual, reproductive and parenthood rights that depend on their age, race and income, as well as on what state they live in. In the 19th century and early 20th century, laws governing these matters were central to the maintenance and extension of the slavery regime, and various state laws permitted the sterilization of immigrants and women of color without informed consent. In the late 20th century, women receiving welfare benefits were targets of punitive policies and loss of benefits if they had additional babies. And in 1980, the Supreme Court upheld the Hyde Amendment, which denies Medicaid payments for abortions, unless the pregnancy is a result of incest or rape, or risks the life of the mother, establishing abortion as a right only for women who can afford one.

As we revisit Roe’s legacy today, we recognize it was the start, but not the end, of women’s reproductive freedom. In 1973, Roe appeared to promise the end of second-class status for women tied to their reproductive capacity, but there are still millions of women—those excluded from Medicaid coverage, constrained by state laws, living in poverty, unable to mother with dignity, and otherwise harmed by their lack of resources—who are unable to make critical decisions about their lives.

As in 1973, this year the Supreme Court must make a decision about whether or not to place significant obstacles in the way of women—obstacles that would leave many without the ability to have safe, dignified care. Whole Woman’s Health v. Cole will determine whether or not Texas’ omnibus anti-abortion law, HB2, will be allowed to full go into effect, setting a precedent that could lead anti-abortion lawmakers in states across the country to pass laws that force clinics to close and push abortion out of reach.

Without victory in this case, and if the onerous Texas laws were to fully go into effect, even more Texas women would be harmed by overwhelming undue burdens—forced to go to multiple and unnecessary visits at clinics that are even farther away from their communities. A woman’s ability to get safe medical care should not depend on whether she has the resources necessary to navigate a horrific and complex obstacle course. Laws such as the one in Texas have real implications on real women’s lives. Low-income women, women of color and rural women bear the brunt of these harsh restrictions.

There is no doubt Whole Woman’s Health v. Cole will have an impact on clinics and access to safe, professional abortion care nationwide. If the Supreme Court does not intervene, lawmakers with little regard to women’s lives across the country will be able to do what they have wanted all along: close more clinics and cut more women off from the healthcare care they need. Texas women deserve better. All women deserve better. 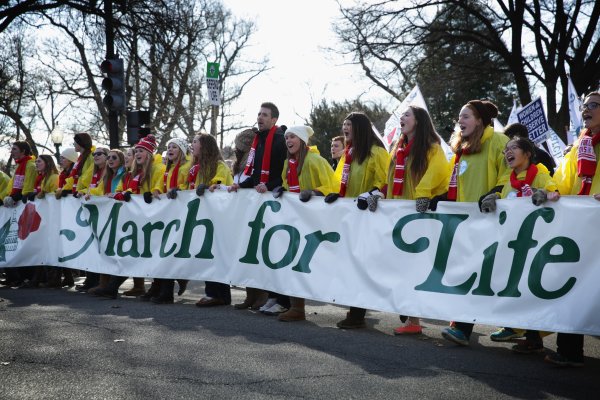 Rep. Diane Black and Dr. Charmaine Yoest: Abortion Is Not Female Empowerment
Next Up: Editor's Pick