Iowa Gov. Terry Branstad said Tuesday that he would not like to see Sen. Ted Cruz win the Iowa Caucus — and it’s all because of corn.

Cruz is an opponent of setting requirements for transportation fuels to contain minimum levels of ethanol—which many in corn-producing Iowa support. Branstad, a Republican, told reporters at the Iowa Renewable Fuels Summit that “it would be a big mistake for Iowa to support” Cruz, according to the Des Moines Register.

When asked if he wants a Ted Cruz defeat in Iowa, Branstad answered “yes.”

This may only help Cruz, who aggressively courted endorsements from many of Branstad’s political rivals, including Bob Vander Plaats and other social conservatives in the state who have occasionally proved to be troublesome for the governor. Cruz is currently polling in second-place in Iowa, according to an average calculated by Real Clear Politics, and a win in the early-state would mean momentum for the campaign going forward.

“Ted Cruz is ahead right now. What we’re trying to do is educate the people in the state of Iowa. He is the biggest opponent of renewable fuels. He actually introduced a bill in 2013 to immediately eliminate the Renewable Fuel Standard,” Branstad said. “He’s heavily financed by Big Oil. So we think once Iowans realize that fact, they might find other things attractive but he could be very damaging to our state.”

The Renewable Fuel Standard, or RFS, enjoys considerable support among Iowans—likely becaue ethanol is a major industry in the state. A December Iowa poll by the Des Moines Register/Bloomberg Politics found 61 percent of likely Republican caucusgoer and 77% of likely Democratic caucusgoers supported the standard.

Cruz, initially opposed to Renewable Fuel Standard, has since tried to soften his opposition, calling for a phase out of the program over five years and citing his main concern as preventing the government from “picking winners and losers” in the energy industry. 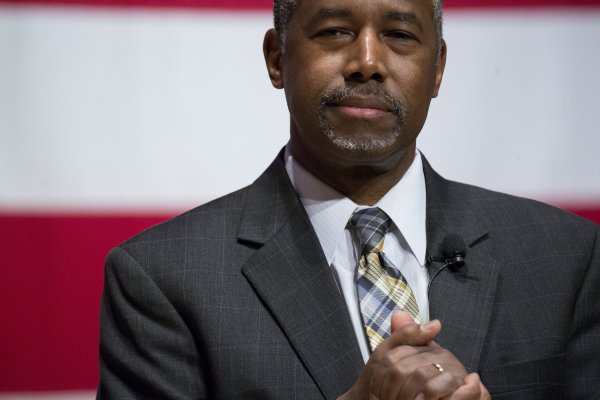 Carson Suspends Campaigning For The Day After Staff Injured in Car Crash
Next Up: Editor's Pick