Review: Zach Galifianakis's Baskets Wrings Painful Laughs From the Tears of a Clown

The sad clown would be a hoary trope, if it didn’t resonate so deeply. Even leaving aside coulrophobia—the fear of clowns is so widespread, it has a word of its own—something dispiriting and real happens when the makeup goes on. Putting a happy, or at least a socially acceptable, face on ineffable pain is what we’re all trained to do.

Zach Galifianakis knows this. The Hangover series and Due Date may be wildly comic, but the star wrings laughs from his futile quest to be understood. Galifianakis’ ability to simply be funny often overshadows the twinge of pain. But on FX’s new series Baskets, which premieres Jan. 21, the actor finally goes full-forlorn.

Galifianakis plays Chip Baskets, who dreams of being a classically trained clown named Renoir. Unfortunately, French clown college doesn’t work out, and he’s soon back in Bakersfield, Calif., performing simply as “Baskets” (the perfect nom de clown). From France he brings both an unloving Euro wife (Sabina Sciubba) and a new dream: to elevate local clowning. Indeed, he’s the most artful, or the most pretentious, rodeo clown the Central Valley has ever seen.

As Baskets seeks to meld high art and low entertainment, Baskets strives to merge humor and melancholy. The clown lives in constant fear of his mother, played by the comedian Louie Anderson in drag, and his brother, played by Galifianakis as a junior-college head whose school includes majors in “ice-cream-truck painting” and “homemade condiments.” The Baskets family is funny, or funny-adjacent. Yet Anderson’s performance feels like a mean joke at someone’s expense. Anderson’s? Ours?

That question—is this grittily real or flat-out mean?—haunts the series. One episode looks at the family’s Easter meal at a casino, during which Anderson’s character finds a way to insinuate herself into the family of Baskets’ one friend, Martha (first-time actor Martha Kelly). The already tough premise gives way to simple brutality.

It’s all artfully done, but something feels familiar. TV is glutted with 30-minute shows that feel like pointed rejoinders to the golden age of the sitcom. Many of the shows giving us a half hour of anomie—including FX’s Louie, whose creator, Louis CK, is an executive producer of Baskets—are very good. But the point that life can be grimly humorous and humorously grim has been made repeatedly.

Baskets is so much in tune with TV’s current blue period that even Galifianakis’ fans might tune out. But they’d be missing something other bummer-coms can’t boast. Galifianakis delivers a remarkable performance, connected enough to his star persona to make the work accessible but pitched at a new level of mania.

Consider Baskets out of clown makeup, talking to his troubled niece. “Suicide is not the answer, usually,” he tells her, barreling through the comma like a linebacker. It’s not all that funny a premise, or, as written, a funny line. But within the sadness, Galifianakis finds the joke. 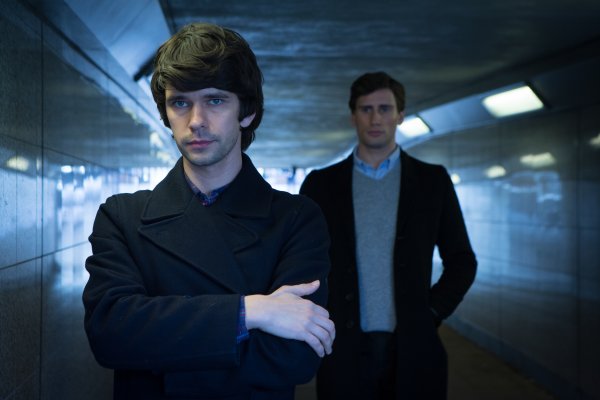 Review: London Spy Delves Into the Inner Life of a Gay Sleuth
Next Up: Editor's Pick