A podium for Donald Trump stands in front of a wax statue of John Wayne at the John Wayne Museum on Jan. 19, 2016, in Winterset, Iowa.
Jae C. Hong—AP
By Tessa Berenson

Standing in front of a horse saddle, a fake desert background and a statue of John Wayne, Donald Trump accepted the endorsement of Wayne’s daughter before reporters in Iowa Tuesday morning.

After Wayne’s daughter Aissa introduced Trump, he quipped, “John Wayne would be very proud of you right now, I think. Maybe he would say, ‘What are you doing?'”

“This is very important to me because of John and his whole legacy,” Trump said. “I met him one time and it made such an impression. When you talk about bigger than life, there aren’t too many people bigger than life… It’s an honor to be here, it’s a tremendous honor to have your support and endorsement.”

Trump is fresh off a very warm welcome from Liberty University on Monday, the largest Christian university in the world. He will receive another endorsement at a later event in Iowa today, but he was coy about who it will be coming from, except to say that it will be a “tremendous event” and people will be “very impressed.” One reporter asked him if the endorsement will come from Sarah Palin, as some have speculated. Trump declined to answer except to say that he is a “fan” of Palin.

Correction: The original version of this story misidentified which member of the Wayne family was endorsing Trump. It was his daughter, Aissa Wayne. 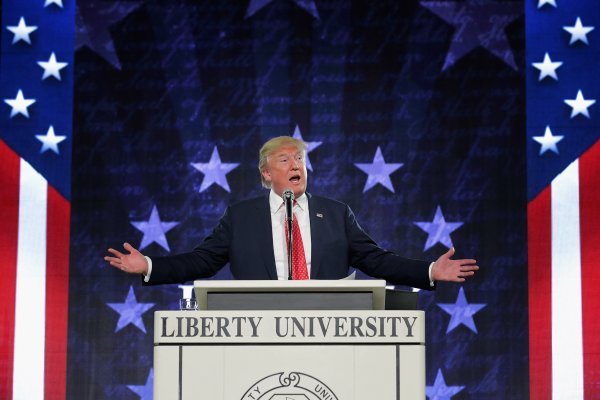 Trump Courts Evangelicals at Liberty University
Next Up: Editor's Pick