Brazilian Lawmakers Threaten to Crack Down on Internet Freedom

Brazil’s politicians are on a collision cause with the country’s young generation of YouTube addicts over planned restrictions on the Internet.

The country’s congress is debating a series of bills that would mean Internet users in Brazil would have to provide their full name, home address and taxpayer ID to every website they use. Those insulted by online content could apply for it to be removed from the Internet. Penalties for defamation would increase.

Brazil is one of the world’s biggest markets for Facebook and YouTube, and Brazilians spent twice as long on social networks as the global average. Freedom of speech campaigners say the politicians are trying to stifle a new wave of criticism and mockery that has flourished online since the digital revolution.

“Congressmen do not like the Internet as people say bad things about them online, especially given how many of them are currently accused of corruption,” says Ronaldo Lemos, director of Brazil’s Institute of Technology and Society.

“They are obsessed with libel and defamation. This law will make it easier to find and prosecute perpetrators. They have a very low tolerance to criticism, they are not used to it like politicians in the U.S. and feel they should have legal remedies.”

Edgy political comedy has flourished on YouTube, in contrast to the conservative nature of Brazil’s television and newspapers. “The reality is that 90% of politicians are corrupt,” says Fábio Porchat, who helped start and performs on Porta dos Fundos, a YouTube sketch show with 11 million subscribers. “But if they believe they can stop freedom of expression, they will find they cannot.”

Porta dos Fundos made its name with its satire on contemporary life, including Brazil’s dysfunctional political institutions. In one sketch, viewed 7.8 million times, politicians discuss how to save government money in the light of widespread street protests. The suggestion that they might “steal less” is met with horror by the others, one of whom explains he has just bought a private jet.

Many of this generation’s celebrities are – like Porchat – YouTube stars with million of followers and the social web has also become a powerful political tool, getting millions out on the streets to protest against the government in 2013.

Brazil’s congress, which became much more conservative in recent elections, is planning to roll back elements of the groundbreaking Civil Rights Framework passed in 2014, which was hailed by World Wide Web inventor Tim Berners-Lee for its balance between the rights of users, governments and corporations while making sure the Internet remained an open and decentralized network.

The new law is being championed by Eduardo Cunha, the speaker of Brazil’s lower house, who has been accused of stashing $5 million in a Swiss bank account in a huge corruption scandal engulfing state oil giant Petrobras. Opponents have nicknamed the draft law the Big Spy. Awaiting a full vote in the lower house which should happen when it reconvenes in February, its stated purpose is to “punish honor crimes committed on social networks.”

It would require all websites, including those with no presence in Brazil, to store users’ personal details for up to three years and provide access to police or other “competent authorities” – a phrase not defined in law – with a court order.

It introduces a right to be forgotten, only unlike the European version it stipulates the actual content, not just search engine references to it, must be removed. Individuals could apply in cases where they have been absolved of a crime, the judgment has been delayed (as happens to many politicians, who can only be tried by the supreme court), or the content is libelous, defamatory or insulting.

TIME contacted the offices of four politicians involved in drafting the laws. None were available for comment during the Brazilian congress’s summer recess.

Under the current draft, every website and app would be required to collect users’ personal data, a situation described as “absolutely absurd” by Lemos, the academic, who helped to draft the Civil Rights Framework. “Many websites will just ignore it,” he said. “It’s bad for innovation and it’s a bad idea on the part of Brazil.”

Google, which owns YouTube, and Facebook declined to comment to TIME but both companies have before run foul of Brazil’s legal system. In December, Facebook’s WhatsApp messaging service was banned in Brazil for 48 hours by a judge, who said the firm had failed to co-operate with a criminal investigation. In 2012, Google’s Brazil chief was arrested for not taking down YouTube videos that criticized a mayoral candidate in that year’s elections. 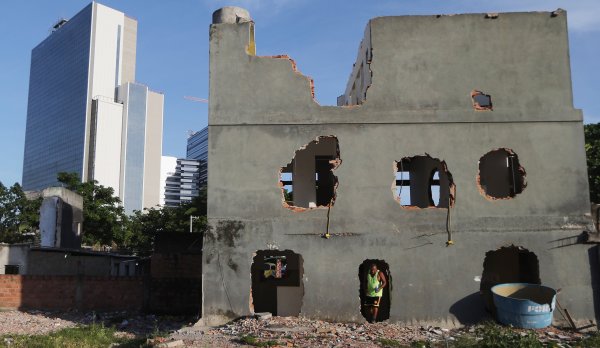 The Favela Residents Who Won’t Make Room For The Olympics
Next Up: Editor's Pick