This undated image provided by Amazon.com shows the so-called Prime Air unmanned aircraft project that Amazon is working on in its research and development labs.
AP
By Lisa Eadicicco

Amazon can already deliver items to some customers just hours after they’ve been ordered. But the online retailer says that time window will shrink down to just 30 minutes if it can deliver packages via drones through its Amazon Prime Air service.

It’s unclear exactly if or when the program will launch, especially since regulators have yet to establish clear-cut rules around commercial drone use. There are also many unanswered questions about how the program itself will work and how much it will cost customers.

Paul Misener, Amazon’s vice president for global public policy, aimed to answer a few of those questions in a recent interview with Yahoo Tech’s David Pogue. Here are some of the key takeaways from their conversation that reveal more about what consumers can expect from Amazon Prime Air.

Amazon’s drones will be able to carry parcels weighing up to five pounds.

Amazon’s marketplace offers a broad variety of items, so the company had to narrow down the types of packages that would be feasible to deliver by drone. “The goals we’ve set for ourselves are: The range has to be over 10 miles,” Misener said to Pogue. “These things will weigh about 55 pounds each, but they’ll be able to deliver parcels that weigh up to five pounds. It turns out that the vast majority of the things we sell at Amazon weigh less than five pounds.”

Packages will still be delivered to a customer’s doorstep even if he or she isn’t home.

“It gets delivered to your doorstep, or wherever you want in your yard, just as it would be if it were delivered by the UPS truck,” Misener said to Pogue.

Drones will be the delivery trucks of the future, according to Amazon.

Misener thinks the “novelty” around drone delivery will wear off in the future as services like Prime Air become more common. “We want to make the deliveries,” Misener said. “And we believe that these Prime Air drones will be as normal as seeing a delivery truck driving down the street someday.”

He also doesn’t think parcels will be endangered when being delivered via drone. When Pogue asked about whether or not Amazon is worried that someone could intercept something like a TV just by shooting it down, Misener responded: “I suppose they could shoot at trucks, too.”

Read more: How Amazon Delivers Packages in Less Than an Hour

The type of drone making a delivery will vary depending on where the customer lives.

Amazon has said in the past that it’s testing different drone designs to learn the best way to deliver packages in different environments. Misener expanded on this when talking to Pogue, saying that Amazon is looking at ways to make drone deliveries to areas that range from rural farmhouses to high-rise city skyscrapers.

One potential obstacle is how Amazon’s drones will be able to make deliveries to specific apartments inside buildings. When Pogue asked if the problem could be solved by designating a spot in a common area like a roof or courtyard, Misener answered: “That’s entirely possible.”

Amazon’s drones will be smart enough to avoid obstacles.

The airborne vehicles Amazon plans to use for its delivery services will be “quite different” than the drones hobbyists can buy today in stores, says Misener. He provided more details about how these “highly automated” drones will be able to detect obstacles and avoid them during travel.

“These drones are more like horses than cars — and let me explain why. If you have a small tree in your front yard, and you want to bang your car into it for some reason, you can do that . . . but try riding a horse into the tree. It won’t do it. The horse will see the tree and go around it. Same way our drones will not run into trees, because they will know not to run into it.”

The sky won’t be filled with noisy, buzzing drones because of Prime Air.

Anyone who lives near a busy street can attest to just how noisy it is to have delivery trucks and traffic constantly zooming by. Amazon will be contributing a new type of vehicle to the mix when Prime Air eventually launches, but Misener says Amazon’s drones won’t be too noisy or disruptive. “Dampening the noise” is one challenge the company is looking into, according to Misener.

“But if we design these correctly, they won’t be loud and obnoxious and noisy,” he said.

Amazon is one of several companies planning to make drone delivery a reality. Google has previously said that it wants to start delivering packages via drone by 2017, and in October Walmart applied to U.S. regulators for permission to test drones for delivery as well. 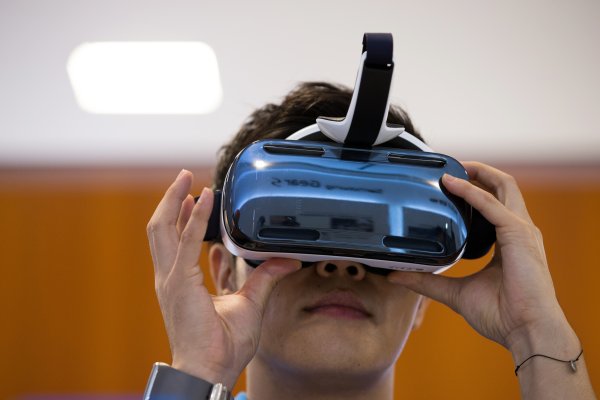 This Startup Is Solving Virtual Reality's Biggest Problem
Next Up: Editor's Pick