The Oscars Diversity Debate Used to Be a Joke

The run-up to the Academy Awards always includes the usual debate over who got snubbed. This year, however, that conversation has taken on a new level of gravity: for the second year in a row, every nominated actor is white.

That conspicuous lack of diversity—which prompted the Academy to institute new measures Friday geared toward increasing diversity—has led Hollywood insiders and fans alike to speak out more than ever before. On Twitter, observers started the hashtag #OscarsSoWhite to voice their outrage. And in a statement on Monday, Academy of Motion Picture Arts and Sciences president Cheryl Boone Isaacs—who in November launched a campaign to promote diversity in Hollywood—said that she is “heartbroken and frustrated about the lack of inclusion.” In protest, Spike Lee and Jada Pinkett Smith have announced they will not attend the ceremony in February, and David Oyelowo said that “the Academy has a problem” that “needs to be solved.”

Whatever the solution may be, it’s clear that the protest is being heard—which is a marked change from earlier protests over the exact same thing.

In fact, it was exactly 20 years ago, in 1996, that a protest over Oscars diversity erupted and led to a very different response: ridicule.

The 68th Academy Awards featured a lineup of actors that was just as white as this year’s is. The best-picture nominees—Braveheart, Apollo 13, Babe, The Postman and Sense and Sensibility—were also overwhelmingly white, as were the directors. The only African-American nominee was the director of a live-action short film.

By the time the nominees were announced, People magazine—a sister publication of TIME—was already in the middle of conducting an exhaustive investigation into the state of black Hollywood. The week before the ceremony, the results ran as a cover story headlined “What’s Wrong With This Picture?” that pulled back the curtain on the fact that, though African-American faces were getting easier to find on the big screen, the success of a few big stars masked an industry that was still largely segregated. For example, at the time, Academy membership was only 3.9% black.

One of the people who read that article was Rev. Jesse Jackson. The issue of media equality was not new to Jackson, but, according to CNN, it was that story that inspired him to focus a protest on that year’s Oscars. He asked supporters at the ceremony to wear a rainbow ribbon to symbolize the importance of the issue.

But the protest wasn’t met with the same thoughtfulness that today’s has been. The president of the Academy met with Jackson, but the president of the Alliance of Motion Picture and Television Producers said that that year’s Oscars were an anomaly and didn’t mean anything. The show was produced by Quincy Jones and hosted by Whoopi Goldberg, and “official greeter” Oprah Winfrey called it “the most multi-ethnic Oscar show anybody’s ever seen.”

Perhaps most tellingly, the protest was skewered on Saturday Night Live‘s Weekend Update. Darrell Hammond’s impression of Jackson, is pretty cringeworthy in retrospect—but that impersonation is not the most telling thing about the clip. Today, Oscars diversity is the subject of satirical television news that makes fun of the absurdity of the situation. Two decades ago, the satire was at the expense of those who wanted to change that situation:

And sure enough, at the ceremony itself, Goldberg, who did not wear a rainbow ribbon, mocked Jackson’s protest. “I had something I might want to say to Jesse right here, but he’s not watching, so why bother?” she said in the opening monologue. Quincy Jones did wear the ribbon, but many other African-American actors—including Will Smith, whose performance in Concussion this year is one of those some feel was overlooked by the Academy—did not.

Jackson, for his part, said that the consciousness-raising that had been done was worth all the mockery. Whether or not 1996 made a difference, it’s clear 20 years later that Hollywood’s level of awareness of the issue has never been higher. 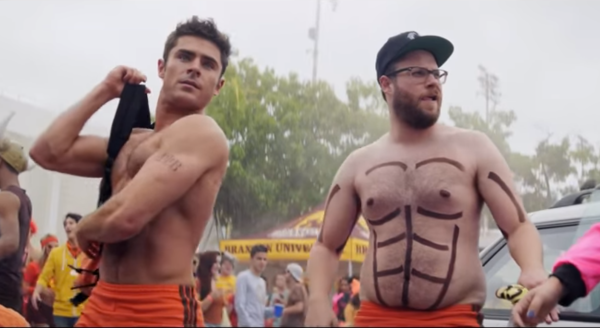 Watch Zac Efron and Seth Rogen Battle a Sorority in Neighbors 2 Trailer
Next Up: Editor's Pick