David Oyelowo Says 'the Academy 'Has a Problem'

By Stephen Galloway / The Hollywood Reporter

Actor David Oyelowo — who was famously overlooked for playing Martin Luther King Jr. in Selma when the Oscar nominations were announced last year — broke off his prepared remarks to blast the Academy at a gala honoring Academy president Cheryl Boone Isaacs Monday night.

“The Academy has a problem,” said the British actor, speaking at the King Legacy Awards, held at the Sheraton Gateway Hotel in Los Angeles, where he was presenting Boone Isaacs with an award named after civil rights icon Rosa Parks. “It’s a problem that needs to be solved.”

He revealed that Boone Isaacs had met with him privately to discuss his omission from the nominations. “A year ago, I did a film called Selma, and after the Academy Awards, Cheryl invited me to her office to talk about what went wrong then,” he said. “We had a deep and meaningful [conversation]. For 20 opportunities to celebrate actors of color, actresses of color, to be missed last year is one thing; for that to happen again this year is unforgivable.”

While urging the audience to pray for Boone Isaacs, he continued: “The reason why the Oscars are so important is because it is the zenith, it is the epitome, it is the height of celebration of artistic endeavor within the filmmaking community. We grow up aspiring, dreaming, longing to be accepted into that august establishment because it is the height of excellence. I would like to walk away and say it doesn’t matter, but it does, because that acknowledgement changes the trajectory of your life, your career, and the culture of the world we live in.”

Oyelowo noted that two of the top films at the box office this week are led by black performers. “We have a situation whereby currently the biggest movie in the world and of all time [Star Wars: The Force Awakens] is led by a black man. That film was knocked off the top spot this weekend by a film led by two black men, Ride Along 2. The biggest TV show on the planet is led by black people, Empire.”

Pointing to the speed of change in the 1960s, he said there was no reason the Academy should take so long to effect change now, without specifying what that change should be.

“There was a photograph up here earlier, and it’s a photograph of Lyndon Johnson giving a pen that was used to sign the Voting Rights Act to Dr. King,” he said. “The year before that photograph was taken, the Civil Rights Act was passed. It was started as an idea by JFK; LBJ used the sentiment at the loss of JFK’s life to bring about the Civil Rights Act being passed. When Dr. King said we need the Voting Rights Act to be passed, LBJ said it’s too soon, it can’t be done. People were losing their lives. People weren’t allowed to vote. Dr. King said [we cannot] wait. What was done was done not in years but months. The march from Selma to Montgomery, those marches began in January of 1965, and by March of ’65 the world was aware what was going on in Selma. By August of that year, the Voting Rights Act was passed.”

He used that example to lambaste the Academy for not moving quicker. “The Academy is an institution in which they all say radical and timely change cannot happen quickly,” he said. “It better happen quickly. The law of this country can change in a matter of months. It better come on. The Oscars is on February 28. Cheryl needs us to pray that by that date, change is going to come. We need to pray for Cheryl, we need to support Cheryl, we need to love Cheryl. We cannot afford to get bitter, we cannot afford to get negative. But we must make our voice heard.” 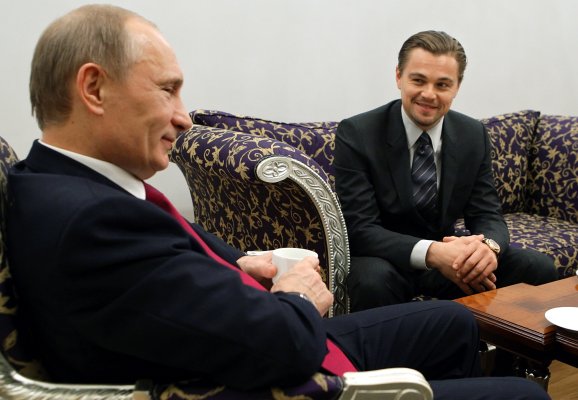 Leonardo DiCaprio 'Would Love' to Play Russian President Vladimir Putin in a Movie
Next Up: Editor's Pick