Time and PBS Partner for Two-Part 'Year in Space' Special

Time Inc. and PBS are partnering on a two-part series, documenting the journey of astronaut Scott Kelly. The first episode of which will air on March 2 at 8:00pm ET within 24 hours of Kelly’s return to Earth after spending a year aboard the International Space Station.

Since 2014, TIME’s filmmakers have been following Kelly on what is easily the most ambitious biomedical experiment NASA has ever run, working to learn more about the limits of human physiology before attempting what could be a two and a half year mission to Mars. The result has been TIME’s elevan-part video series “A Year in Space,” which began last year with Kelly’s training in Houston and Russia has followed him through launch and up to his new home on the ISS. Episode Six, “Perseverance,” premiered on January 11.

TIME has been given extraordinary access to training facilities at NASA, the Gagarin Cosmonaut Training Center outside of Moscow, the Scott Kelly family’s home in Houston, the Soyuz spacecraft as Kelly and his crewmates flew to the ISS, and the interior of the station itself. TIME has also followed the story of retired astronaut Mark Kelly, Scott’s identical twin, who is serving as a near-perfect control subject for the mission, allowing scientists to compare how identical genomes react differently to a year spent in to very non-identical places. The second part of the PBS series, to air in 2017, will follow up on both Kelly brothers as the results of the experiment roll in and as Scott reacclimates to life on Earth.

“The series represents one of Time Inc.’s most ambitious projects to date. It’s an example of the high-quality programming that we are producing across our brands that audiences can access on any platform,” said Ian Orefice, Senior Executive Producer of Time Inc. Video. “We are thrilled to be working with PBS on this monumental program and look forward to a collaborative partnership.”

A YEAR IN SPACE is directed by Shaul Schwarz and produced by TIME’s Red Border Films, with Jonathan Halperin, Mark Mannucci and Jonathan Woods serving as the producers. 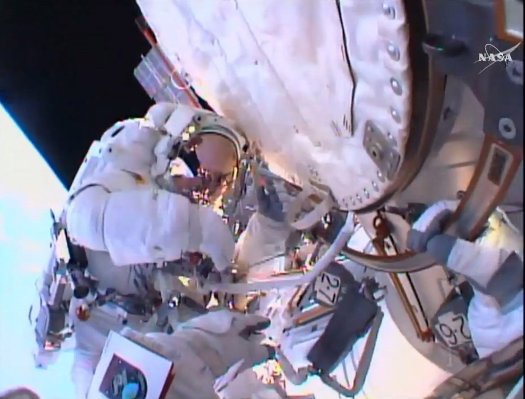 Spacewalk Ended After Astronaut Spots Water In Helmet
Next Up: Editor's Pick