How Democrats Flubbed the Encryption Question at Debate

None of the three presidential candidates at the Democratic debate Sunday night appeared to understand the controversy over encryption technology that, in recent months, has pitted top national-security officials against the CEOs of Silicon Valley’s biggest tech firms.

Earlier this month, senior Obama Administration and national-security officials met with top executives at Facebook, Apple and Twitter to discuss, among other things, the problem of how to prevent criminals and terrorists from using encryption to hide from law enforcement.

The issue, in a nutshell, is that end-to-end encryption, an increasingly ubiquitous technology, makes it impossible for anyone to unscramble the content of messages that have been intercepted in transit between end users. So even if law-enforcement officials at, say, the NSA or the FBI were to get a warrant to spy on an encrypted text conversation, all they would be able to access was a mess of scrambled numbers.

Law-enforcement officials think that’s dangerous because it creates a digital safe haven for criminals and terrorists. They would like to force tech companies like Apple and Facebook to manufacture what’s known as “back doors” into their encrypted devices and apps, such as iMessage and Whatsapp, so that government agents, with warrants, could unscramble messages if and when they needed to.

Read More: Why We Can’t Unscramble the Fight Over Encryption

Silicon Valley’s brass, including Apple CEO Tim Cook, think that’s a terrible idea. Any back door that can be used by law-enforcement officials can also be exploited by hackers, cybercriminals and snoops of all stripes, they say. That could be bad for people like you and me, who keep lots of private information on their devices. But it could also be bad for democracy and civil liberties writ large. Consider, they say, what would happen if Chinese officials could access a back door on Facebook’s Whatsapp and peer in on any dissident or reformer’s private conversation.

In other words, the debate over encryption gets to the heart of our most basic values as Americans. What if FBI Director James Comey is right when he suggests that encryption could make it harder for law-enforcement officials to prevent the next terrorist attack? Are we willing to endure that possibility in exchange for better protection for our private information? Must we give up some security in exchange for civil liberties?

But when the issue came up during the Democratic debate, none of those sticky wickets were addressed.

“Tech companies are responsible for the encryption technology to protect personal data, but the government wants a back door into that information,” said YouTube star Marques Brownlee, in a pre-recorded question for the candidates. “So do you think it’s possible to find common ground? And where do you stand on privacy vs. security?”

Former Maryland governor Martin O’Malley went first, offering a hard-to-follow analogy about front doors and back doors that earned applause from an apparently bewildered audience. “I believe whether it’s a back door or a front door that the American principle of law should still hold that our federal government should have to get a warrant, whether they want to come through the back door or your front door,” he said.

Vermont Senator Bernie Sanders went next. “I voted against the USA Patriot Act for many of the reasons that Governor O’Malley mentioned. But it is not only the government that we have to worry about, it is private corporations,” he said. “You would all be amazed, or maybe not, about the amount of information private companies and the government has in terms of the websites that you access, the products that you buy, where you are this very moment.”

Former Secretary of State Hillary Clinton began by congratulating Obama Administration officials for meeting in Silicon Valley on Jan. 8 to start “exactly this conversation about what we can do, consistent with privacy and security,” but she avoided the question of whether the government should force tech companies to put back doors into encrypted apps.

“We need better intelligence cooperation, we need to be sure that we are getting the best intelligence that we can from friends and allies around the world,” she said.

If Democrats are going to come up with a platform on encryption, though, they might need to decode the tech talk for themselves first. 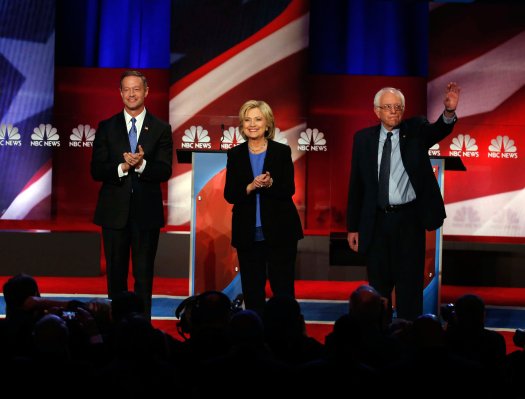 Meet the YouTube Stars Who Asked Questions at the Democratic Debate
Next Up: Editor's Pick