Meet the YouTube Stars Who Asked Questions at the Democratic Debate

The questions at Sunday’s Democratic presidential debate didn’t just come from TV journalists—a group of YouTube stars also got to put the candidates on the spot.

The group—Franchesca Ramsey, Connor Franta, Marques Brownlee and MinuteEarth—each posed questions based on their area of expertise at the debate, which was hosted by NBC and also streamed live on YouTube.

Sanders responded, “Absolutely. This is a responsibility for the U.S. Justice Department to get involved. Whenever anybody in this country is killed while in police custody, it should automatically trigger a U.S. attorney general’s investigation.”

Franta, 23, is a lifestyle vlogger whose videos range from a guide to Instagram to comedy sketches. His 5.2 million followers earned his first book, A Work in Progress, 16 weeks on the New York Times bestseller list. Franta questioned former Secretary of State Hillary Clinton about her efforts to appeal to younger voters.

“Getting my generation’s vote should be a priority for any presidential candidate,” Franta said. “Now I know Senator Sanders is pretty popular among my peers. But what I wanna know is how are all of you planning on engaging us further in this election?”

Clinton congratulated Franta for having so many followers and then noted that it’s important to engage both millennials and older voters in going to the polls for the Democrats. “Turning over our White House to the Republicans would be bad for everybody, especially young people,” she said.

Brownlee, a gadget reviewer, used his technology expertise to ask a question about whether tech companies and the government can find a middle ground over encryption, which sets up a debate between privacy and security.

Former Maryland Gov. Martin O’Malley responded to the question, calling for protection against unwarranted government interference. “Our federal government should have to get a warrant, whether they want to come through the back door or your front door,” he said.

Finally, the team of scientists at MinuteEarth gave their take on the uphill battle against climate change, citing grim statistics about human contributions to climate change and the “political gridlock” that prevents progress. Their statement was followed by a question from moderator NBC’s Lester Holt about what it would take to convince Americans to change their behaviors.

Sanders replied that it’s impossible to avoid noticing climate change. “I was home in Burlington, Vermont, on Christmas Eve, the temperature was 65 degrees,” he said. “People in Vermont know what’s going on.” 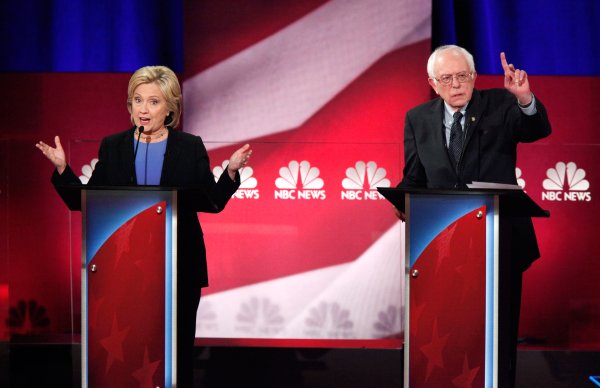 Here's the Fight Underlying the Democratic Debate
Next Up: Editor's Pick