Goodbye to Ziggy, farewell to the Thin White Duke. “I was adopting the characters offstage,” he told TIME. “And then I found that I was living like the character, that the character was slowly evolving and taking over.” He’d begun the new decade introverted, burying himself in work, living in Berlin, Kyoto and Sydney and raising his young son following his divorce. After a decade of putting out more than a record a year (a pace fueled, in part, by drugs—goodbye to them too), David Bowie slowed down a bit at the start of the 1980s. It gave the world enough time to catch up with his wild imagination and come around to his idea that music wasn’t something you just listen to. A painter, a mime, an actor, Bowie had dabbled in short-form music video as far back as “Space Oddity,” well in advance of the advent of MTV. In 1980 he offered artful clips for “Fashion” and “Ashes to Ashes.” With its debut on Aug. 1, 1981, the new cable network thoughtfully provided him an outlet for these works, as well as for his next persona: David Bowie, unabashed pop star. How hard could it be to decide to be a Top 40 star and then be one? “John Lennon once said to me, ‘Look, it’s very simple—say what you mean, make it rhyme, and put a backbeat to it,’ ” Bowie told Rolling Stone. “He was right, man.”

He reappeared looking healthy—in a boxer’s getup on the cover of 1983’s Let’s Dance— and performed in immaculate suits and a blond pompadour. Supported by a suite of videos (including one for “China Girl” deemed too steamy for MTV in its pre-edited form), Let’s Dance became his best-selling album and minted millions of new Bowie fans, even if it alienated longtime devotees who mourned the loss of the outsider freak who was once all their own. Guitarist Robert Fripp, who collaborated on 1980’s Scary Monsters, put it more pointedly in Rolling Stone when he said (with affection) that of all Bowie’s personalities, the most prominent one may have been the “shrewdie who keeps his ass covered.”

Bowie dominated the video age, more of a piece with Duran Duran and Eurythmics than rockers of his own generation. He labored over his clips, plotting out shots and consulting heavily with the directors. But—and you can’t say this about every great ’80s video—the songs worked when you closed your eyes, thanks to the rock-and-funk grooves he laid down with producer Nile Rodgers. Bowie generated so much credibility with MTV’s audience that he was able to challenge the network’s lack of diversity in an interview with VJ Mark Goodman, wondering why it didn’t air more African-American artists. As Goodman squirmed, Bowie asked: “Do you not find that it’s a frightening predicament to be in?”

In the ’80s, Bowie was also wealthier than ever. EMI paid him between $10 million and $17 million to make five albums. After Let’s Dance, Bowie retreated to Switzerland to work and ski. His follow-ups, 1984’s Tonight and 1987’s Never Let Me Down, were overproduced and underinspired. Bowie had abandoned the freaks for Let’s Dance, and he had no idea how to get them back or how to keep his new Top 40 audience interested. “I went mainstream in a major way with the song ‘Let’s Dance.’ I pandered to that in my next few albums, and what I found I had done was put a box around myself,” he told an interviewer. “It was very hard for people to see me as anything other than the person in the suit who did ‘Let’s Dance,’ and it was driving me mad—because it took all my passion for experimenting away.”

After Never Let Me Down, Bowie embarked on his first tour in five years, hanging a 60-foot spider from the rafters above his elaborately choreographed dancers (including one, Melissa Hurley, who was his girlfriend for a time). When he performed in West Berlin in June 1987, in a city where he and Iggy Pop had once decamped to retreat from drugs and fame, he pulled out his 10-year-old masterpiece “Heroes,” which deals with a couple kissing “just for one day” before the Berlin Wall permanently separates them. Bowie knew East Berliners were listening too: “We send our wishes to all our friends who are on the other side of the wall.” A week later, President Reagan delivered his “Mr. Gorbachev, tear down this wall” speech. Two years later, the wall finally fell. “We kind of heard that some East Berliners might actually get the chance to hear the thing, but we didn’t realize in what numbers they would,” he told interviewer Bill DeMain. “And there were thousands on the other side that had come close to the wall. And we would hear them cheering and singing along from the other side. God, even now I get choked up.” Bowie may have been foundering artistically—he would soon try to right himself by forming the quartet Tin Machine— but his cultural influence remained intact. 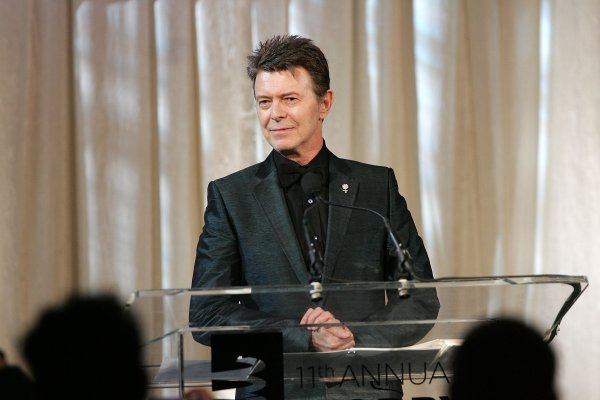