The people of Taiwan elected their first female President on Saturday — a bookish technocrat who has vowed to put domestic concerns above deepened ties with China, which are increasingly seen here as a poisoned chalice.

Tsai Ing-wen, a U.S.- and U.K.-trained lawyer, and leader of the Beijing-skeptic Democratic Progressive Party (DPP), took some 56% of the vote to end eight years of Nationalist Party (Kuomintang or KMT) rule blighted by anemic growth and soaring inequality.

“We will put political polarization behind us and look forward to the arrival of an era of new politics in Taiwan,” Tsai said after her victory. “The people expect a government that can lead this country into the next generation, a government that is steadfast in protecting this country’s sovereignty.”

Tsai has pledged to revitalize the sluggish economy of this de facto nation of 23 million by diversifying trade with South, Southeast and East Asia, thus breaking with the KMT’s policy of greater integration with China — the world’s second biggest economy — in the hopes that it would boost Taiwan’s own.

Beijing still claims Taiwan as a “renegade province” to be reclaimed by force if necessary — a relic of China’s civil war and the flight across the strait in 1949 by the defeated Nationalist forces of Generalissimo Chiang Kai-shek. Because of Chinese pressure, Taiwan is only officially recognized by a handful of nations and has no U.N. seat. Many in Taiwan fear that the last decade of rapprochement between these longtime foes is merely a prelude to Beijing’s soft annexation of the island.

“The KMT are with the rich people and the Chinese government — they almost want to reunify with China,” says DPP supporter Bobby Lin, a 26-year-old dentist in Taipei. “Tsai Ing-wen keeps thinking about the Taiwanese people and how to improve Taiwan’s economy.”

Concerns over the economy consistently ranked highest with voters throughout campaigning. Growth was just 1% last year, barely more the year before, with youth unemployment high, wages stagnant and the cost of living soaring (sprawling Taipei is now comparatively one of the world’s most expensive cities to live).

“We just got married and are worried about our future as we cannot buy a house,” says Maggie Chen, 34, a project manager from Taipei, of the dilemma she faces with her partner. “We support the DPP as they have explained their policies carefully.”

Attention to detail has become the hallmark of the former university professor Tsai. Born into an affluent Taipei family, the 59-year-old studied law in Taiwan before earning her masters at Cornell and a doctorate at the London School of Economics. Beneath a decidedly wonkish demeanor, confidants say Tsai has a droll manner, and party officials have worked hard to cultivate a softer image, posting photos to social media of the now most powerful woman in the Chinese-speaking world with her two cats, Think Think and Ah Tsai.

It is a message that chimed with younger voters, who stood at the vanguard of the DPP victory. At the party’s final election rally outside Taipei’s presidential palace on Saturday, heavy-metal bands, one clad in menacing Peking opera masks, entertained the thousands that braved pelting rain to wave banners bearing the party slogan “Light Up Taiwan.”

This upbeat branding stood in stark contrast with the KMT’s foreboding message that a DPP victory would mean a return to open hostility across the strait. Outgoing President Ma Ying-jeou, of the KMT, was ineligible to stand for re-election having already served the maximum two terms, and his party’s candidate, Eric Chu, was always trailing in the polls. “We have been too successful [historically] in educating our own people that China are the bad guys,” KMT vice chairman Jason Hu tells TIME.

The DPP has promised a raft of stimulus measures, including five industrial and innovation hubs across the island, a shake-up of the education system, and efforts to boost tourism. The party also wants to encourage Taiwanese businesses that have invested in China to consider moving operations home.

“I would refer to it as a ‘guilt economy,’” says Shih Chih-yu, a professor of political science at Taiwan National University. “It’s a way to create a sense of duty for people making money in China, so they will perhaps try to redirect their resources back to Taiwan.”

Such tactics may, of course, irk Beijing, and the financial ripples could upset Taiwan’s already unsteady economy. Some 25% Taiwan’s exports currently go to the People’s Republic, with another 13% to the semiautonomous Chinese satellite of Hong Kong. Close to half of the record 10 million tourists that came to Taiwan last year set off from mainland China.

“Tsai Ing-wen will be very cautious in what she says and does,” says Professor Steve Tsang, director of the Taiwan Studies Programme at Nottingham University in the U.K. However, “[Chinese President] Xi Jinping’s priority at the moment is not actually Taiwan, it is to consolidate his control, rebalance the [Chinese] economy and put China on an upward trajectory.”

Tsai will have similar objectives for her first term. Crucially, the DPP also has a healthy majority in Taiwan’s legislature — the first time the KMT has lost control of this key institution. But this strength may mean she will have to work hard to quell the more strident voices within her party urging formal independence — a goal the DPP retains within its founding charter but one that Tsai has pragmatically chosen to obfuscate, aware that any such move would be met with a swift military response from Beijing.

“We will work towards maintaining the status quo for peace and stability across the Taiwan Strait in order to bring the greatest benefits to the Taiwanese people,” Tsai told a press conference after her victory. “Both sides of the strait have a responsibility to find mutually acceptable means of interaction.”

According to Professor Lin Chong-pin, of Taiwan’s Tamkang University’s Graduate Institute of International Affairs and Strategic Studies, there are “overlapping ambitions between Tsai and Xi Jinping” that make a calamitous deterioration of relations unlikely.

“Tsai will already be looking forward to re-election in 2020, and for that she has to deliver economic stability,” he says. “The next four years would also constitute two-thirds of the remaining term of Xi Jinping, and he would hate to see his record for Taiwan and cross-strait relations remaining blank at the end.”

For now, Taiwan’s people can relish in a vibrant democratic process — it is the only one in the Chinese world — as well as the fact that they have elected the first female leader of an Asian democracy who is not following in the footsteps of a previous male relative. Tsai is a self-made woman for a self-made people.

Correction: An earlier version of this article misstated Tsai’s profession before she entered politics. She was a lawyer. 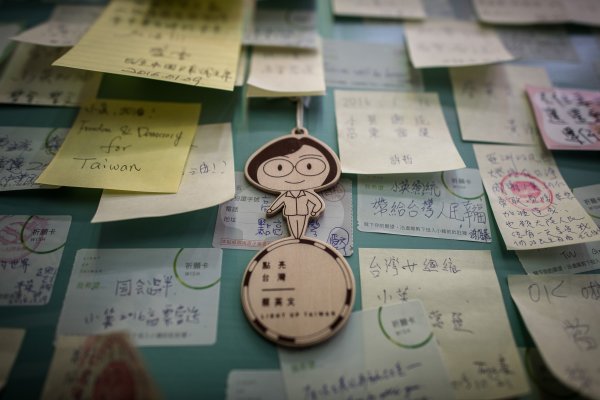