President Obama said the existence of a “luxury goods” tax placed on feminine sanitary products like tampons and pads is likely due to the fact that men wrote the laws in an interview on Friday.

YouTube personality Ingrid Nilsen asked President Obama why tampons were even considered “luxury goods” because few of the women she knows would consider menstruation a luxury. “I think Michelle would agree with you on that,” he said.

“I have to tell you, I have no idea why states would tax these as luxury items,” Obama said Friday. “I suspect it’s because men were making the laws when those taxes were passed.”

Obama said it’s “pretty sensible” for women in the 40 states where the items are taxed as luxury items to work on getting that changed. Because they’re state taxes, it will take action on a local level to get things changed. Last year ushered in a wave of interest in removing taxes on tampons and pads, leading Canada to remove a levy. A bill was also introduced in California this week to eliminate the tax.

“This raises a broader question that I’ve been working on since I came into office which was, how do we make sure that everybody has decent health care, preventive care and women in particular have the health care that they need,” he said. ‘The basic idea is that women should not be at a disadvantage in the health care system and this is just one more example of it, which I confess I was not aware of until you brought it to my attention.” 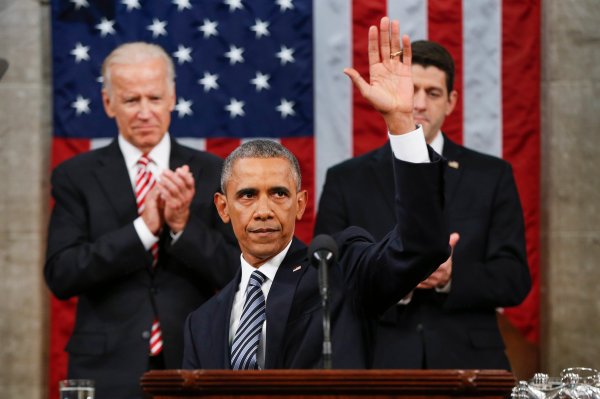 Obama's Final State of the Union Was His Least-Watched
Next Up: Editor's Pick