The leading Republican presidential candidates looked to solidify their positions a day after the most acrimonious debate of the campaign, with controversy flaring over Donald Trump’s “New York values” and lower-polling candidates eyeing a chance to become the establishment favorite before voting starts.

Much of the focus Friday morning was on Trump and Texas Sen. Ted Cruz, who dominated much of Thursday night’s debate. After brushing back Trump’s questions about Cruz’s eligibility, the Texan questioned whether Trump’s “New York values” were in step with conservative voters.

Trump, who invoked the Sept. 11, 2001 terrorist attacks in defending his hometown, sought Friday morning to deflate the perception that Cruz, who has been rising in the polls, largely got the better of Trump on Thursday night.

“I think he hurt himself last night. You know, he’s a good debater, but he’s very strident, and a lot of people aren’t going to like that,” Trump said on MSNBC on Friday.

Even some Democrats came to Trump’s defense.

“It’s a horrible message for anyone who pretends to be a leader to talk that way about the largest city, the greatest city in the country,” New York City Mayor Bill de Blasio said on CNN.

“I’ll tell you the truth: it was highly, highly offensive and really just obnoxious on every level,” New York Gov. Andrew Cuomo said in a radio interview. “In 30 seconds, the man not only criticized New York and our 18 million people, but it was anti-gay. It was anti-woman, opposing a woman’s right to choose, and it was so antithetical to what this country is all about.”

Cruz—who said Thursday night that “the values in New York City are socially liberal or pro-abortion or pro-gay-marriage, focus around money and the media”—issued an apology for the remarks Friday — of a sort.

“Donald Trump, Hillary Clinton, Governor Cuomo and Mayor De Blasio have all demanded apologies, and I’m happy to apologize,” he said at a town hall in South Carolina. “I apologize to the millions of New Yorkers that have been held down by liberal policies in New York City.”

“One of the things the President is going to do is nominate Supreme Court Justices, maybe as many as four,” Rubio said in Derry, N.H. “We need to appoint Supreme Court Justices that understand that the Constitution is not a living, breathing document. It is supposed to be interpreted and applied as originally intended.”

“What I said about Sonia Sotomayor was that she deserved an up or down vote, but that she was not the type of Justice I would select if I were President,” Christie said on MSNBC. “That’s hardly supporting someone, that’s just saying someone should get an up or down note.”

And Bush, whose once-promising candidacy has been mired in single digits, hoped for a boost by securing the endorsement for South Carolina Sen. Lindsey Graham.

“He demonstrated somebody in my view who is ready on day one to be commander-in-chief,” Graham, who recently dropped out of the race, said of Bush’s debate performance.

–With additional reporting by Philip Elliott 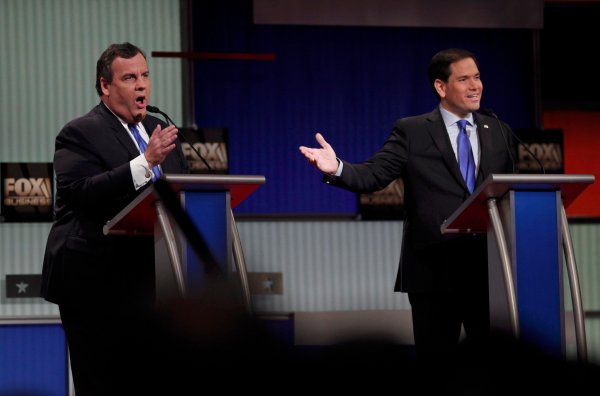