We, the People, Were the Losers at the Republican Debate

Watching the choleric Republican presidential candidates brawl only two days after seeing President Barack Obama’s State of the Union Happy Talk was as jarring as eating spicy chili after an ice cream sundae. Jeb Bush, showing that he speaks Bushspeak like his father and brother, said: “the idea that somehow we’re better off today than the day that Barack Obama was inaugurated president of the United States is totally an alternative universe.” Alas, none of these politicians, selling their respective “alternate universes,” triumphed, leaving we the people as the losers.

Obama’s State of the Union address demonstrated the advantages of incumbency. The president was presidential, commanding attention, seemingly basking in the love. Television beamed it all home: the grandeur of the House chamber, the crowd’s huzzahs, the repeated standing ovations. The fact that many legislators mostly sat stonily was not apparent. Viewers heard the Democrats’ shouts and saw them standing and sitting, standing and sitting, loyally doing their mass partisan squat thrusts.

Relentlessly optimistic and shamelessly self-promoting, Obama celebrated “the progress of these past seven years.” He worked in his partisan shots subtly—albeit hypocritically considering his call for less partisanship. And, after meandering a bit, he concluded lyrically, celebrating “the country we love” as “Clear-eyed. Big-Hearted. Optimistic that unarmed truth and unconditional love will have the final word”—delivering two last jabs.

In the Republican debate, the seven aspirants struggling for attention in a more pedestrian setting couldn’t rely on Obama’s rhetorical stiletto swipes. They launched verbal cruise missiles against each other and against the president. Perhaps it was due to the State of the Union address two days earlier, but Obama seemed to attract more fire than Hillary Clinton. The candidates started by aiming at the Democrats, and eventually bashed each other, growling, clawing, elbowing and grumbling for two-and-a-half hours.

The bombastic Chris Christie mocked the State of the Union as “story time with Barack Obama” and, forgetting their 2012 embrace, called the president of the United States “a petulant child.” The usually statesmanlike Jeb Bush said that under Obama “the world has been torn asunder” and that Clinton “would be a national security mess.” Marc Rubio, who had many of the evening’s sharpest lines, said: “We elected a president that doesn’t believe in the Constitution,” is “weakening America on the global stage,” and “doesn’t believe in the free enterprise system.” Ted Cruz, sounding downright Democratic, complained: “The millionaires and billionaires are doing great under Obama.” And one of those billionaires, Donald Trump, deflecting criticisms that he is too surly, said: “I’m very angry because our country is being run horribly.” Later on, speaking Trumpese, he evoked the violence in Indonesia by saying “bomb, bomb, bomb” and denounced the “Iranian wise guys” who humiliated American sailors.

Underlying this doom-and-gloom were serious ideological clashes between the Republicans and the Democrats. Republican shorthand seems to be: Guns—good; Second Amendment—very good; immigrants—bad; taxes—very bad; ISIS and radical Islamist terrorists—evil and thriving under Obama. Most of the differences separating the Republicans concerned who is the most orthodox of the lot.

Oddly, both evenings misfired. It is hard to believe that skeptics went to sleep Tuesday night after Obama’s speech feeling better about America. And it is equally implausible that many voters changed their minds after Thursday’s night slog-fest. The candidates themselves seemed more focused on performing rather than persuading.

The result was more political dyspepsia. Obama’s rigid rosiness despite two-thirds of Americans thinking the country is off-track lacked the empathy for which Bill Clinton was so famous. Clinton was a master at selling himself, celebrating America, but also acknowledging, as he once said, that many Americans were unnerved, feeling “lost in the funhouse.”

At the same time, the Republican Grumpelstilskins lacked the light touch for which Ronald Reagan was so famous. Reagan tempered Barry Goldwater’s cranky conservatism with a smile, offering some red-white-and-blue-flavored sugar to help his occasional downers go down.

As master pols, both Clinton and Reagan backed up their appealing styles with compelling substance. As president, Obama has frequently failed to strike the right tone that reassures most Americans, while his opponents have yet to offer compelling alternatives. As a result, they—and we—wallow in their clashing “alternative universes,” languishing amid this nasty, lingering, political stalemate. 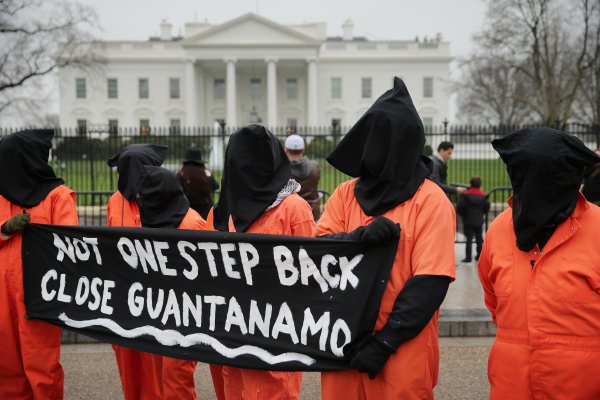 Guantánamo Will Never Deliver Justice to 9/11 Families
Next Up: Editor's Pick