Even as Germany has grappled with a scandal over alleged sexual assaults involving migrants, Sweden has been embroiled in its own sexual assault controversy.

It erupted on Jan. 11 after the liberal newspaper Dagens Nyheter reported leaked police memos indicating that Swedish police had covered up reports of groping and the sexual harassment of young girls at a Swedish music festival last summer by refugee youths. The story implied that the police covered-up the reports in order to avoid anti-immigrant sentiment.

Read More: How the Mafia Make Millions Out of the Plight of Migrants

Sweden’s Prime Minister Stefan Löfven called the alleged cover-up a “double betrayal.” Björn Söder, an MP from the Sweden Democrats, a right-wing and anti-migrant party, called it “a scandal without equal”—though later in the week, a special prosecutor in Sweden announced that there would be no formal investigation because there was no evidence of any criminal wrongdoing by the police.

Though the facts of what actually happened at the festival remain unclear, the controversy has raised questions in Sweden about whether the Scandinavian country’s liberal political values had stifled a more honest discussion about how to integrate migrants from the Islamic world who might not share those values—even as the response of right-wingers fed accusations of racism.

It is not the first time that Sweden has had to deal with the uncomfortable intersection of racism and sexual assault against women. After sexual assault allegations were made against Wikileaks founder Julian Assange in Sweden in 2012, the country faced scrutiny over statistics that suggested it had one of the highest rape rates in the world. Right-wing organizations, such as the Gastestone Institute, have used this data as an indication of risk migrants pose to women. But Sweden’s National Council for Crime Prevention cautions against comparing crime data across countries, and attributes Sweden’s statistics to high rates of reporting rape, and a broadening of the definition of rape in 2005.

This kind of controversy is particularly sensitive in Sweden, which has taken in more refugees per capita than any other country in Europe. But the country’s welcoming nature started to shift at the end of the year, as support grew for the anti-migrant Swedish Democrats, who claimed 20% support according to a December Ipsos MORI poll commissioned by Dagens Nyheter. At the end of last year, the government announced new policies designed to reduce migration to Sweden, such as expanding border controls, replacing permanent residence permits for asylum seekers with a temporary three-year residency permit, and putting stricter limits on family reunification.

The attention on these particular assaults has put many Swedish feminists in an uncomfortable place. They don’t want to play down the very real threat of sexual violence that all men potentially pose, but they don’t want that threat used as a political weapons against refugees. “It is very dangerous to racialize sexual harassment,” says Tiina Rosenberg, a founding member of Sweden’s feminist party, the Feminist Initiative, and a gender scholar and professor at Stockholm University. “There is a long post-colonial history of the white patriarchy trying to rescue the brown women from the brown men… There is a lot of [similar] racialized talk in the making today that is anti-migration, and we should be very careful about that. We should talk about all the harrassment against women. We should object and protest, but we should not make the distinction about people from another ethnic background that they are more violent than we are… because otherwise we find ourselves in a place of saying: ‘I’m not a racist, but…'”

Other Swedish feminists agreed, saying that, while it may be good that it the national refugee crisis brought attention to the violence all women face, it is wrong to describe the problem as specific to refugees. “This kind of harassment and violence has been going on for a long time in every country,” says Gudrun Schyman, a Swedish politician and spokeswoman for the Feminist Initiative, “What is common is men.”

Experts also note that the alleged crimes in the news are rare incidents in the context of the enormous number of migrants who have come to Europe in the last year alone. Dubravka Šimonović, UN Special Rapporteur on violence against women, wrote in an email to TIME: “According to UNHCR data, more than 1 million migrants arrived in Europe last year. Therefore, against this background, we are currently speaking about incidents that must be carefully studied to establish any patterns and links.”

But some feminist leaders do want to address any cultural differences that might exist as migrants are integrated into their receiving countries. Sweden’s approach to gender equality is uniquely progressive, and Swedes would like to keep it that way. A recent World Economic Forum report ranked Sweden as the fourth most gender-equal nation out of 142 countries. The higher rates of rape reporting in Sweden are seen as a sign that women feel particularly empowered. And gender equality education in Sweden is strong: last year every 16-year-old was given a copy of the book-length essay We Should all be Feminists, by Nigerian author Chimamanda Ngozi Adichie.

Clara Berglund, of The Swedish Women’s Lobby, wants to take some steps to protect those values in Sweden, including mandatory education about gender equality for migrants. “We want education on gender equality for refugees. But when we demand this, we are countered by other feminist groups who say that when you make this argument, you are supporting anti-immigrant groups. We can have a generous refugee policy, and at the same time, have mandatory education. For some people, it is hard to combine these views because there is a big fear of being associated with anti-immigrant groups, to be thought of as racist, ” says Bergland.

“As feminists, we have to put gender equality and women’s rights first. As soon as there is a big challenge for society, it is always women’s rights and gender equality that is less prioritized. People are afraid that any voices saying that other cultures are less gender-equal would undermine the picture of Sweden as a welcoming and multi-cultural society. This kind of silencing that is going on is a barrier to Democracy.”

Gulan Avci, 38, a former Swedish MP for the center-right Liberal People’s Party and president of the Liberal Women Federation in Sweden, says that fear of racism is stopping Swedes from properly integrating migrants, and will also be dangerous for migrant women.

“Swedish politicians have not been successful in talking about the challenges that we meet with this big immigration to Sweden,” she says. “There is a fear in Sweden of being thought of as racist if you talk about these problems. These fears cause us to sweep these problems under the rug. This has been caused by xenophobic forces that are exploiting them…Sweden is a country that is afraid of conflict.”

Avci says moderates’ reluctance to talk about potential culture clash strengthens support for right wing groups. “When people don’t get answers, and the Swedish Democrats give the answers, then they trust them. People need to perceive that they are safe in their own society.”

Avci, who is of Kurdish descent and immigrated when she was a little girl to Bredäng, a largely immigrant suburb of Stockholm, says that ignoring the reality of the refugees’ culture does a disservice to migrant women and girls, who should benefit from the same equality with men as native-born Swedes.

“If Sweden is going to be a role model for gender equality in the future, then we need to say that the law must be equal to everybody who lives here. If we don’t do that, then indirectly we are saying that some groups are not worth fighting for,” she says. “I’m very disappointed with the feminist movement in Sweden who don’t care about victims of honor culture. If you don’t fight for these girls and women, then you don’t respect human rights.”

Fear of racism may also prevent discussion about the gender imbalance in migration, which can be a risk factor for violence against women. More than seven out of ten asylum seekers coming to Europe are men, according to data compiled by the Economist. Some researchers have found that gender imbalance can lead to heightened risk of all kinds of violence in recieving countries. Valerie Hudson, a political science professor at Texas A&M, told the Financial Times: “The literature I’ve contributed to shows a pattern: the higher the sex ratio, the higher the crime rate and crimes against women…When you get a surplus of young men in a society–and they are marginalized, disadvantaged, and they live together and socialize together–you have the beginnings of collective activity in which they take what society has denied them.”

Yet, Ebba Witt-Brattström, a Swedish feminist who now teaches at the University of Helsinki still saw a silver lining: “It is a good thing for women that at last the sexual harassment of young women that has been going on in schools and on the net, everywhere and at every time has surfaced where it can be debated by everybody.” 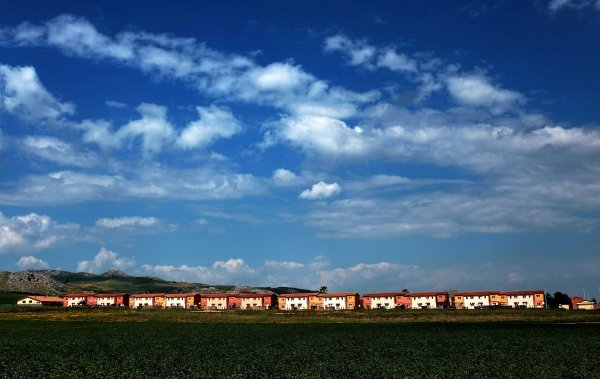 How the Mafia Make Millions Out of the Plight of Migrants
Next Up: Editor's Pick