The Republican presidential candidates slammed the mainstream media during a debate on Thursday, repeatedly singling out the New York Times for criticism to the delight of the audience.

When a debate moderator asked Donald Trump about a Times editorial board quoting him as favoring a 45 percent tariff on Chinese exports to the United States, the Republican front-runner’s answer was succinct.

“It’s the New York Times. They’re always wrong,” he said, to laughter and applause, though he later conceded that he was “totally open to a tariff.”

Like most debate moderators, the Fox Business Network hosts referenced news articles to bolster the credibility of their questions and justify asking them. But like most Republicans at debates, the candidates fired back with one-liners.

Maria Bartiromo asked Ted Cruz about a recent New York Times report that said he failed to properly disclose $1 million in loans from Goldman Sachs and Citibank during his U.S. Senate race.

“Your campaign says it was inadvertent. A million dollars is inadvertent?” Bartiromo said.

Cruz responded with a critique of the newspaper.

“Well, Maria, thank you for passing on that hit piece on the front page of the New York Times,” Cruz said.

“The nice thing about the mainstream media — they don’t hide their views,” he said before referencing a piece by Times columnist Frank Bruni that compared Cruz to the “body-hopping spirit” featured in the horror movie It Follows.

“Yes, I made a paperwork error disclosing it on one piece of paper instead of the other, but if that’s the best hit the New York Times has got, they better go back to the well,” Cruz said.

When Trump mentioned a new NBC/Wall Street Journal national poll that showed his lead over Cruz has strengthened, the audience jeered at the mention of both news organizations.

But in at least one instance, Ben Carson was content using the word of the Wall Street Journal’s editorial board, alone, to make his point.

“I just want to say, you know, last week we released our tax plan and multiple reputable journals, including the Wall Street Journal, said ours is the best. Just want to get that out there. Just saying,” he said. 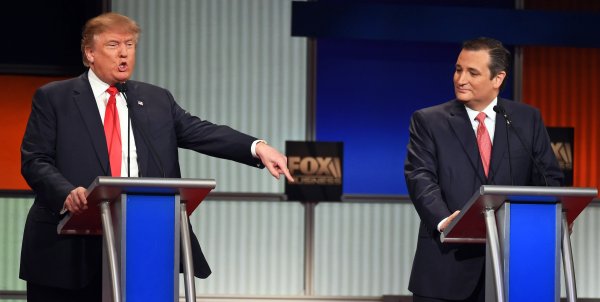