Indonesian authorities on Friday morning arrested three men in connection with Thursday’s terror attacks in the capital city Jakarta, in which at least seven people died and more than 20 others were injured, but later found them innocent of involvement.

Local police chief Dwiyono told a television channel that the trio, whom he classified as “suspected militants,” were apprehended early Friday morning at their homes in the Depok area on the outskirts of Jakarta, the Associated Press reported.

However, Jakarta police spokesperson Muhammad Iqbal later told the same channel, Metro TV, that the men were found to have no connection with Thursday’s attacks. “There are no arrests of suspects linked with the terrorist acts yesterday,” Iqbal said.

The Islamic State of Iraq and Greater Syria (ISIS) has claimed responsibility for the attacks, which took place at an area near a popular shopping mall and the city’s main U.N. office in a bustling commercial area. The assailants, five of whom police said were killed, detonated bombs and opened fire on security forces.

The trademark black flag of ISIS was found on one of the attackers, national police spokesman Anton Charliyan told the AP, adding that their identities are believed to have been established. However, he did not reveal any names.

Bahrun Naim, a former Internet café owner and ex-terrorism convict who police say has become a key member of a growing militant network that has gained a foothold in Indonesia in recent years, has been named as an alleged mastermind of the Jakarta attacks. Bahrun, who moved to the Middle East to join ISIS in 2015, and is rumored to be heading the Islamic extremist group’s Southeast Asia wing, is suspected of coordinating Thursday’s attacks from Syria. He also gave instructions to a terrorist cell whose members, including Uighur jihadist suspect Alli, were arrested last December.

Jakarta police chief Tito Karnavian told Reuters that the Indonesian jihadi, who wrote a blog post in the wake of November’s terrorist attacks in Paris detailing how easy it would be to redirect guerrilla warfare in Indonesia’s jungles to one of its populous cities, had been planning an attack on the country’s capital for some time. 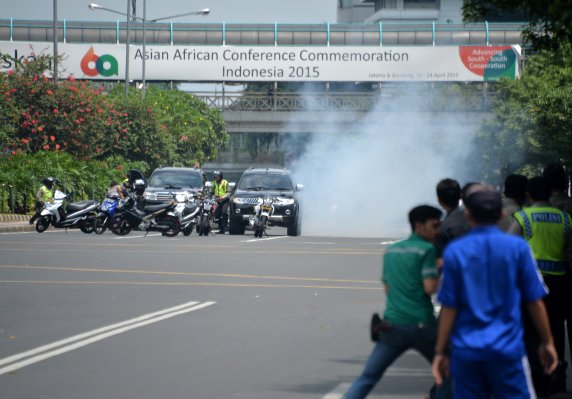 The Last 6 Major Terrorist Attacks in Indonesia
Next Up: Editor's Pick