The "USA Freedom Kids" is a girl group based in Florida. They performed for Donald Trump at the Republican presidential frontrunner's rally on Jan. 13.
Courtesy Jeff Popick
By Melissa Chan

The father who penned a ditty for three young girls to sing about Donald Trump’s ability to crush America’s foes says he was inspired by the Republican frontrunner’s “great heart and brilliant mind.”

The trio of young patriots — aka “USA Freedom Kids“— sang the tune penned by Jeff Popick at a rally in Florida late Wednesday. “Cowardice, are you serious? Apologies for freedom — I can’t handle this! When freedom rings, answer the call!” they sang, dancing in flag-bedecked dresses.

“On your feet, stand up tall! Freedom’s on our shoulders, USA! Enemies of freedom face the music. Come on boys, take them down!” they continued. “President Donald Trump knows how to make America great. Deal from strength or get crushed every time.” A video of the performance was shared widely on social media on Thursday.

Popick told TIME he was moved to write the tune after Trump announced his candidacy last June. “I’ve been a fan of his for decades. He’s got a great heart and a brilliant mind,” Popick said Thursday. “He has a methodology for success and winning that’s second to none. To me, he’s always just been an inspiration.”

The 53-year-old businessman manages the girl group led by his 8-year-old daughter, Alexis. He said he had originally written the song in honor of Lt. General George Patton, who led the U.S. Army when it liberated Italy in World War II, but tweaked it to focus on Trump. “When I saw Donald Trump announce his candidacy and he talked about George Patton, I was just inspired to change it and make it a little more contemporary.”

The girls entertained about 15,000 during Wednesday’s rally at the Pensacola Bay Center. They formed “USA Freedom Kids” about six months ago after Popick held a casting call to find its members. The group has since performed at Miami Dolphins’ and Miami Marlins’ games, singing the National Anthem. “They love it. They truly live for this stuff,” Popick said. “Every bit of it yesterday, it was a long day, but they absolutely stayed with it. Their energy was up. They loved meeting Donald Trump and performing.” 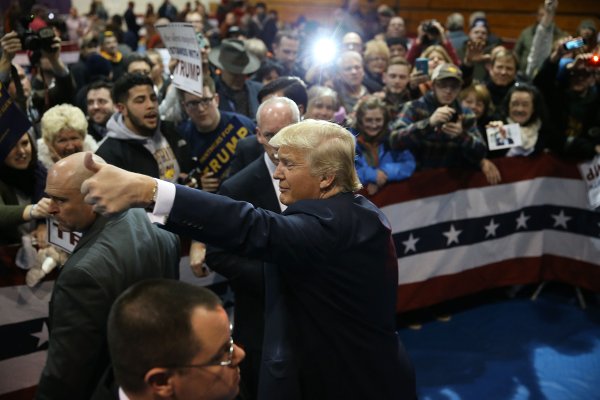 Trump: My Movement Is Bigger Than Reagan's
Next Up: Editor's Pick