The Short, Chaotic History of the DeLorean

The DeLorean DMC-12 became and remained famous as the time-traveling car in the Back to the Future movies—but the actual automobile was infamous for years before Marty McFly stepped inside one in 1985. And, though the fiction is better remembered today, the real story of the DeLorean is just as dramatic.

First of all, DeLorean was a real person: John Z. DeLorean, who was breathlessly covered by the 1970s press as a renegade General Motors exec who bucked the corporate establishment and set off on his own, and then shared his remembrances of the automaker in a book. A few years later, however, it became clear that he wasn’t out of the auto game: In 1977, DeLorean said that he was hoping to go into business producing his own sports car. Though he estimated at the time that he could have the car ready by the next year, it wasn’t until Jan. 21, 1981—exactly 35 years ago—that the first DeLorean DMC-12 was produced.

Months before the cars would be available, it was clear that DeLorean was going big: for the holiday season of 1980, the American Express catalog advertised a DeLorean plated in 24-karat gold going for $85,000 (versus $20,000—about $54,000 today—for the steel version).

“Shaped like a flying wedge, the DeLorean appears to exceed the 55-m.p.h. speed limit while standing still,” TIME noted. “It is expected to get 22 m.p.g., about the same as a diesel-powered 1981 Cadillac Brougham. Entry to its luxuriously appointed interior is through gull-wing doors that tilt up instead of swinging out. The 24-karat car will pose some special maintenance problems. Owners wishing to get any dents knocked out will probably have to return the damaged part to the factory, where the bumps will be pounded out and the piece refinished in gold.”

By October of 1980, seven people had put down a deposit on a golden DeLorean.

Though the 1980 car market wasn’t exactly solid gold, the lavish DeLorean style didn’t stop at the cars themselves. A 1983 book later charged that John DeLorean ran up expenses on the company’s dime even after it was clear the cars wouldn’t be a big hit. In April of 1981, he bought a new house in what was then one of the largest residential real-estate deals in New Jersey history. But by the time the company hit its first production anniversary, it was in trouble. In October of 1982, DeLorean closed—and John DeLorean was arrested and charged with trying to save his company by selling cocaine.

He was found not guilty—he had been entrapped, the jury said—but in 1985 he was back in court on a number of chargers relating to his handling of company money. He was acquitted in 1986, but it was too late for the car. Only about 9,000 of the cars were ever produced.

It’s still possible to buy a DeLorean. As collector’s items, a top-notch used early-’80s DMC-12 can go for nearly $50,000. But that first DeLorean is out of reach: it’s now held in the collection of the Western Reserve Historical Society in Cleveland. 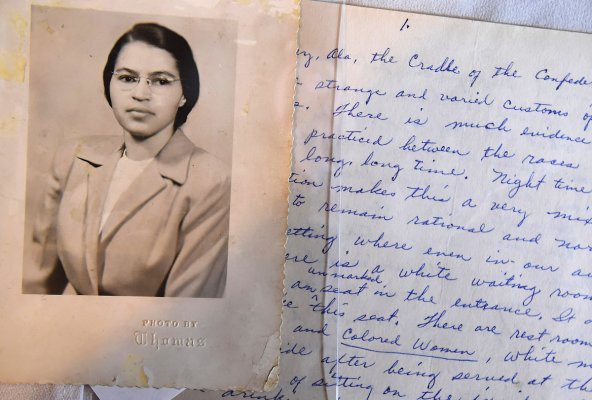 Listen to a Rare Recording of Rosa Parks Telling Her Story
Next Up: Editor's Pick