In light of the death of Golden Globe winning-actor Alan Rickman at age 69, we’ve rounded up some fascinating tidbits you might not have known about the man known for playing two of cinema’s best villains: Hans Gruber in Die Hard and Hogwarts professor Severus Snape in the Harry Potter films.

He was a graphic designer.

Rickman studied graphic design at the Royal College of Art (RCA) between 1968-69 in London and opened a studio in SoHo, where he helped design book jackets, album sleeves, ads, in addition to layouts and illustrations for magazines. “A constant financial tightrope,” as he described the experience to The Design Observer Group, a publication about the trade. “It came to a natural finish when I started to work in fringe theater and then went to RADA” (the Royal Academy of Dramatic Art).

He injured himself during the first scene he shot for Die Hard.

He hurt his knee during the first scene he shot with Bruce Willis for the role that launched his film career. “I thought I had ripped a ligament on the very first shot. Turned out I’d torn a cartilage, but I knew enough to go downstairs and see the doctor,” he told Empire magazine. “I hadn’t even shot a scene! I was still in my costume, and I said, ‘Could you pull the trouser leg down over that splint thing?’ I went back up to the 33rd floor and carried on shooting.”

He pranked Daniel Radcliffe on the set of Harry Potter and the Prisoner of Azkaban.

“There’s a shot in the great hall of all the kids sleeping in the great hall, and the camera starts very very wide, and comes in so that it’s an inch from my face,” Radcliffe wrote in an “Ask Me Anything” for Reddit. “Alan Rickman decided he would plant one of those fart machines in my, uh, sleeping bag, and they waited until like – the camera had come in for this huge DRAMATIC developing shot, and then unleashed this tremendous noise in the great hall.”

He said he “never” watches himself on screen.

“I think you start to edit yourself,” he told Empire.

He said the Australian outback is the most beautiful place he has ever visited.

“It’s a natural Versailles sitting in the desert,” he told the YouTube channel ODE.

“I’m fascinated watching a flock of birds,” he told astrophysicist Neil deGrasse Tyson in a 2012 interview on the show StarTalk. “What going on there? How do they know they’re with more of them anyway?” 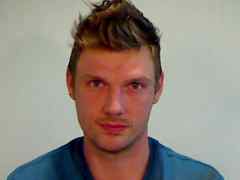 Backstreet Boys' Nick Carter Arrested for Battery in Florida
Next Up: Editor's Pick