U.S. Sailors Freed by Iran, But Their Humiliation Persists

There is something viscerally humiliating to many Americans about seeing those U.S. sailors in Iranian captivity. They’re on their knees, with their hands meekly clasped behind their heads, awaiting their captors’ next orders. What’s clear is that while the Iranians apparently were careful not to hurt the sailors, they knew precisely what to do to humiliate them—and the nation they represent.

The videoed images of the sailors released by Tehran showed the world who was in charge of the nine men and one woman for 16 hours. But absent evidence of cruelty, the Obama Administration suggested that the sailors had been treated well and released quickly. While the videos were demeaning, and likely violated the Geneva Conventions, the main emotion they seemed to raise among Americans was your typical patriotic revulsion.

Iranian media had a field day, publishing and broadcasting some 20 photographs and several videos of the U.S. sailors, two of which showed a male sailor apologizing for the incident. “It was a mistake that was our fault,” he said, “and we apologize for our mistake.”

The Iranians released that video shortly after Vice President Joe Biden insisted to CBS that there had been no apology because “there was nothing to apologize for.”

At least one of the sailors’ patrol boats apparently had a problem that led both of them to drift into Iran’s territorial waters off its heavily-defended Farsi Island in the middle of the Persian Gulf, where the Iranians took the craft and crews into custody. Additional photographs and videos showed Iranians inspecting weapons aboard the boats.

“The Administration is pretending as if nothing out of the ordinary has occurred,” Senator John McCain, the Arizona Republican and chairman of the armed services committee complained. “These sailors were ‘arrested’ in apparent violation of international law and centuries of maritime custom and tradition.” The Geneva Conventions bans the release of images of identifiable detained troops.

The 10 sailors left Iranian custody Wednesday morning, sailing aboard their boats to the cruiser USS Anzio steaming just outside Iran’s territorial waters. They were then flown to the carrier USS Harry S. Truman for medical tests before being taken to a military base in the region where they will go through a standard regime given to U.S. troops who have been detained.

It takes political skill to know how and when to react to a military provocation. The Obama Administration, intent on sealing a deal limiting Iran’s nuclear ambitions, plainly wants to do nothing to derail that achievement. The key question is why Iran didn’t feel the same way. 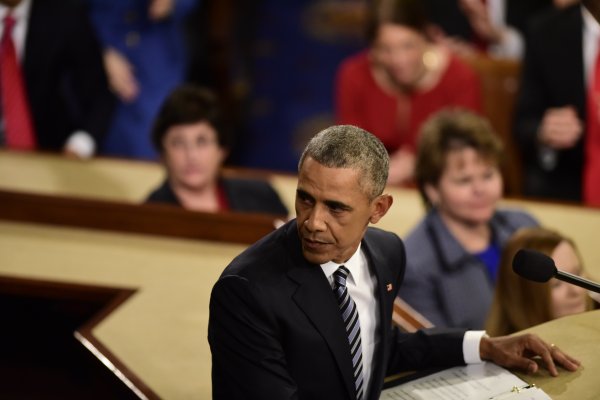