Adele can truly do it all.

On top of soulfully belting out her hits “Hello” and “Rolling in the Deep” with The Late Late Show host James Corden, the British singer showed off her rap skills with an amazing cover of Nicki Minaj‘s verse in Kanye West’s “Monster” in the latest installment of the hit Carpool Karaoke.

Minaj immediately reacted to Adele’s cover with much praise on Instagram writing, “Pull thru, QUEEN!!!!! #Adele #Monster the attitude & fingers to match. #Oh #Ok #IcoNic I cried when she waved bye to the careers #Hello #BuhBye.”

And that’s not all.

While driving around their native England, Adele, 27, and Corden, 37, also proved they are die-hard Spice Girls fans by singing loudly to “Wannabe.” The mother of one revealed she threw a Spice Girls-themed birthday party when she was younger and identified most to Ginger Spice a.k.a. Geri Halliwell.

Karaoke wasn’t the only entertaining part of the bit. Adele also shared new tidbits about her music during her car ride with Corden.

“One of the reasons I name my albums after my age is that they’re sort of polaroids of my life at that time,” she explained prompting the late night host to ask, “When do you think you’ll stop?”

Adele also reiterated she’ll no longer be naming her next projects after her age. “This is the last album after my age. I believe in trilogies,” she said even joking, “The next one will just be Adele“.

Corden also dared to wonder if Adele will go for the EGOT honor since she already has an Oscar and 10 Grammys on her awards mantel. The singer ruled out the idea of composing a Tony-winning musical someday quipping, “I don’t have time for that!” She does have a sold-out world tour to get ready for!

Another can’t-miss sound bite? Watch to see what Adele had to say about comparing her #squad (Jennifer Lawrence, Emma Stone, Beyoncé) to Taylor Swift’s! 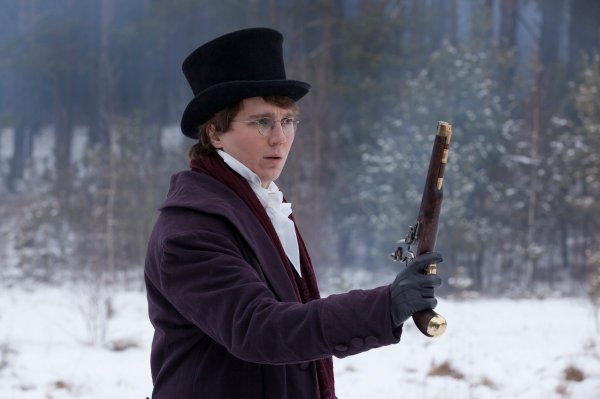 Review: War and Peace Is Tolstoy, Plus 21st Century Flair
Next Up: Editor's Pick