Type-2 Diabetes and the Diet Prescription

Dr. Monica Peek had been telling her patients for years that food can be medicine, but it wasn’t until she started scribbling down actual prescriptions on paper–“I recommend the following nutrition for this patient”–that they started taking her seriously.

Over time, her advice gained enough traction that those diet prescriptions are now at the heart of a novel study supported by the National Institutes of Health (NIH) and the Merck Foundation that’s challenging the status quo of Type 2 diabetes prevention and treatment.

Peek is a primary-care physician and lead researcher of the South Side Diabetes Project in Chicago. That’s why, at 10 o’clock on a Saturday morning, she’s here, munching on a banana, as 15 people are being guided around a grocery store, being taught which foods are diabetes-friendly and which are best left on the shelf. Led by a nutritionist, the group stops in front of a cold case full of nondairy milk. “I guarantee if you give the body what it wants, it’s going to do what it’s supposed to do,” says Bridgette Adams, the nutritionist leading the tour. “And you will get better. You will get better. You will get better.”

When it comes to preventing Type 2 diabetes, that mantra may be more than wishful thinking–which is good news, because the stakes are high. One out of three Americans will be diagnosed with diabetes by 2050, according to the Centers for Disease Control and Prevention (CDC), and 29 million people already have the disease.

People with Type 2 diabetes, who are often overweight, can experience extreme fatigue, blurry vision and sores. Though some people don’t feel symptoms right away, the slow-growing but potentially debilitating disease can gradually damage their blood vessels and nerves. And even when it’s well managed, it requires constant vigilance: monitoring blood-sugar levels, counting carbohydrates, timing meals, taking multiple blood-sugar-lowering drugs and sometimes injecting one’s abdomen with a syringe full of insulin.

In 2012, diabetes cases–90% of which were Type 2–cost the U.S. health care industry about $245 billion. And some of the larger price tags are for its complications. Left to progress, Type 2 diabetes can lead to blindness, kidney failure and nerve damage that can require foot or leg amputations. Taken together, that has led researchers and doctors to look for better ways to reduce the number of people who develop the disease every year.

Programs like Peek’s may be onto something. For the better part of the past two decades, new cases of Type 2 diabetes shot up considerably each year, but that trend appears to be leveling off, according to a December 2015 CDC report. Meanwhile, data emerging from years-long studies indicate that exercise and changes in diet can dramatically reduce a person’s risk of developing Type 2 diabetes.

“I think people intellectually know that eating healthy and being active is good for you, but I don’t think they understand what an impact it has on preventing Type 2 diabetes for those at high risk,” says Ann Albright, director of the Division of Diabetes Translation at the CDC. “It really is the most effective intervention for delaying or preventing Type 2.” What researchers like Peek are trying to figure out is how to spread that message in a way that works in the real world.

In the U.S., more than two-thirds of adults are overweight or obese. Since extra body fat is a major risk factor for Type 2 diabetes, that means a lot of people are at risk of getting the disease. Still, some populations are at higher risk than others. Black Americans, Hispanics and American Indians, for instance, have higher rates of the disease than whites. The South Side Diabetes Project focuses on Chicago’s best-known black neighborhood.

The program hosts cook-offs and offers diabetes-education classes as well as farmers’-market and grocery-store tours. All this is done in addition to a patient’s standard treatment, which may include several kinds of medication administered by a physician at one of six medical clinics–two of which are run out of the nearby University of Chicago, where Peek is an associate professor of medicine.

This type of program, while not altogether new, is now winning the support of insurers, many of which are beginning to reimburse patients and organizations for lifestyle-based prevention programs. “We can prevent a lot of chronic diseases if we eat better and exercise more,” Peek says. “But people don’t always think about it in that way.”

This isn’t the first time researchers have experimented with lifestyle as a way to prevent Type 2 diabetes. In 2002, the Diabetes Prevention Program, a landmark NIH trial that lasted for three years, published its findings in the New England Journal of Medicine. At 27 sites across the country, researchers divided 3,000 overweight people with prediabetes–an elevated-blood-sugar condition that, without intervention, typically progresses to full-blown Type 2 diabetes–into groups. Members of the lifestyle-intervention group ate less fat and fewer calories, exercised for about 20 minutes a day and aimed to lose about 7% of their body weight. Another group took metformin, a commonly prescribed glucose-lowering drug that’s taken by millions of Americans. The third group took a placebo.

The people in the diet-and-exercise group reduced their risk of developing diabetes by 58%. Lifestyle changes were especially impressive for older people; those 60 and older reduced their risk of diabetes by 71%. People who took metformin also saw a benefit, but they slashed their diabetes risk by only 31%–about half that of the lifestyle group. “Those results really brought the issue to light that diabetes development is not inevitable,” says Dr. David Nathan, chairman of the Diabetes Prevention Program and director of the Diabetes Center at Massachusetts General Hospital.

In another study, a randomized trial out of the Goldring Center for Culinary Medicine at Tulane University, a small number of people with Type 2 diabetes were divided into two groups. One of the groups was taught how to prepare foods consistent with the diabetes-friendly Mediterranean diet; the other group was given basic nutrition instruction. After six months of follow-up, the researchers saw significant improvements in the cholesterol and blood-pressure levels of the Mediterranean-diet group–and the changes lasted.

“It’s not just a quick blip in their health records,” says Dominique Monlezun, director of research and development for the Goldring Center. “These patients are actually changing their eating behaviors in a way that we see as sustainable.”

Nathan, who ran the pioneering Diabetes Prevention Program study, also saw lasting change. He and his colleagues followed their original groups for about 15 years. In the follow-up, published in November 2015 in the Lancet Diabetes & Endocrinology, 27% fewer of the people who made lifestyle changes ended up developing Type 2 diabetes, compared with the control group.

Backed by substantial evidence that lifestyle changes work in preventing the development of Type 2 diabetes–especially in those who are at high risk of the disease–the approach began to take hold. The CDC now recognizes more than 800 organizations across the U.S. that offer programs in that vein. One of the most successful is the YMCA’s Diabetes Prevention Program, a one-year curriculum designed to help overweight adults with prediabetes prevent the onset of Type 2 diabetes. (About 86 million American adults are estimated to have prediabetes, though only about 10% of them know it.) In weekly classes, across all 43 states where the Y program is offered, people are coached on healthy ways to modify lifestyle. Those who finish the class lose an average of 5.4% of their body weight by the end of the year.

And while no one is suggesting that diet and exercise alone can reverse Type 2 diabetes, similar strategies can reduce the severity of the symptoms. A study of 5,000 people with Type 2 diabetes showed that the same diet-and-lifestyle intervention used in the Diabetes Prevention Program improved their diabetes, blood pressure and cholesterol control, all while allowing people to use fewer medications than the control group.

For all the data supporting diet as a way to prevent Type 2 diabetes, a doctor’s telling his or her patient to eat right and exercise more isn’t going to cut it. “I think a lot of doctors, to their credit, they probably tell you, You need to lose weight,” says David Marrero, director of the Diabetes Translational Research Center at Indiana University. “But they don’t give you specific recommendations, because they’re not trained in behavioral modification.”

Indeed, a major downside to the diet-and-exercise strategy is that it requires a lot of work over a long period of time. “You can dabble around and halfheartedly do things,” says the CDC’s Albright, “but for preventing Type 2 diabetes you do really need to make sure people get an adequate dose of the intervention.”

That means a consistently good diet and regular exercise–as well as addressing the barriers that make it challenging for people to stick to those healthy behaviors. Still, it can be an uphill battle. “Even though we know you can do modest changes in your lifestyle to reduce risk,” says Marrero, “it is difficult for many people for a wide variety of reasons. Some are genetic, some are psychological, some are social, some are economic.”

In addition to nutrition tours and cooking classes, Peek and her team distribute those doctor-signed prescriptions, with vouchers for farmers’ markets or for the food section of a Walgreens or for free fitness classes at nearby parks. So far, the results from Peek’s program are promising. A study last August found that the diabetes-education classes–central to Peek’s program–were advancing not only patient knowledge about the disease but also their attitudes about taking charge of their health. Working with the people on the other side of the health care equation–doctors and other clinic staff–is a critical part of the puzzle too. Leaders at the South Side Diabetes Project train the physicians and their teams at their six partner clinics on how to deliver care to patients of different cultures.

That’s why, at the end of the South Side grocery tour, everyone gets a hug and a gift card for food. A woman who took the tour checks out with a box of lettuce–but also some candy and chocolate. “This whole thing is complicated,” says Peek. “If it was easy, we would have solved it years ago.”

Although the diabetes epidemic may be slowing ever so slightly, it’s nowhere near over, and much remains to be seen about the best way forward. But Peek is stubbornly supportive of every person taking the first step–even if it’s just a few leaves of lettuce.

“We sometimes forget the importance of what motivates people, and it’s relationships,” Peek says. “You just have to care about people, and that’s something anyone can do.” 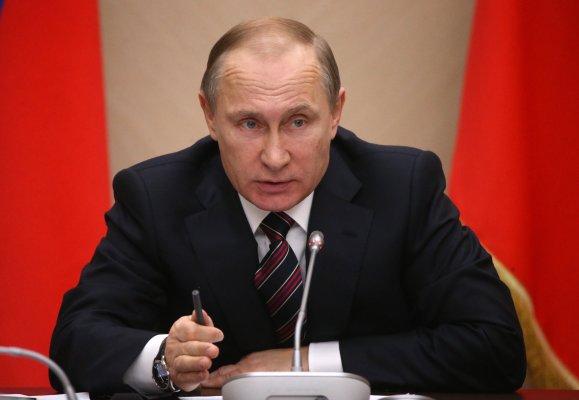 Putin Says Russia Has an Ebola Vaccine
Next Up: Editor's Pick