These Are the Last Six Major Terrorist Attacks in Indonesia

Police hide behind vehicles during an exchange of gunfire with suspects hiding near a Starbucks cafe when another blast happens in Jakarta on Jan. 14, 2016.
Bay Ismoyo—AFP/Getty Images
By Mark Rivett-Carnac

At least seven people died as attackers detonated explosives and showered gunfire through central Jakarta, Indonesia’s capital, on Thursday. This carnage follows in a long line of terrorist attacks that have rocked the country, still viewed as vulnerable to extremism.

April 15, 2011
A suicide bombing during Friday prayers injured 30 people and killed the attacker, Muhammad Syarief, 31, at a police station mosque in Cirebon, West Java. Syarief was known to be a hard-line activist.

July 17, 2009
A pair of explosions killed seven people as they tore through two luxury hotels in Jakarta. The suicide bombers appeared to have targeted foreigners visiting the JW Marriott and Ritz-Carlton.

Oct. 1, 2005
Three explosions within 10 minutes rocked southern Bali. The first hit the bustling Kuta district, then two more detonated in nearby Jimbaran Bay. The series of blasts killed 20 people and the three attackers. More than 100 others were injured.

Sept. 9, 2004
A car bomb outside the gates of the Australian embassy in Jakarta killed nine people and wounded some 150 more. The blast flattened a 30-ft. section of the fence.

Aug. 5, 2003
A suicide bomber pulled into driveway of the JW Marriot hotel in Jakarta and detonated a bomb, killing 12 people and injuring nearly 150 others.

Oct. 12, 2002
Islamic militants killed 202 people, including 88 Australians, when they blew up two nightclubs in Bali — a Hindu-majority island that is a favorite among tourists. The blasts were tied to the al-Qaeda-linked group Jemaah Islamiyah. 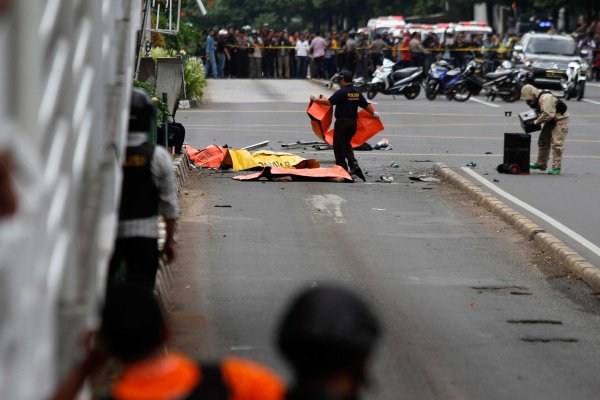 ISIS Launches Attacks in Jakarta
Next Up: Editor's Pick