Attackers detonated explosives and opened fire in central Jakarta on Thursday morning in a strike that left at least seven people dead, according to an Associated Press report.

The first blasts occurred midmorning at a Starbucks store at Sarinah shopping mall, located on Jalan Thamrin, a major thoroughfare through the Indonesian capital. The mall is across an intersection from the U.N.’s main offices in Jakarta, in a crowded commercial district of the capital also occupied by office complexes, high-end hotels and a number of embassies.

On Twitter, Jeremy Douglas, a U.N. regional representative in Jakarta, reported six explosions at around 11 a.m. local time that were followed by a “serious exchange of [gunfire]” between the attackers and security forces. According to witness reports tweeted by an editor at the Indonesian magazine Tempo, two suspects mingled with the crowd of people that gathered at the blast site and then opened fire on police officers. A Tempo photographer also said that one gunman ran in the direction of Jakarta’s National Monument.

Colonel Muhammad Iqbal, a Jakarta police spokesperson, told the Associated Press on Thursday afternoon that five attackers were among the dead, two of whom were killed by police. Though shooting continued into the afternoon, by 3 p.m. authorities reported that the situation had been contained.

General Anton Charilyan, a national police spokesman, said the assailants imitated the recent “terror acts” in Paris and were likely from the Islamic State group, but gave no evidence.

Indonesian soldiers stand guard near the site where an explosion went off in Jakarta, Indonesia, Jan. 14, 2016.
Dita Alangkara—AP

Adam Harvey, a correspondent in Jakarta, cited local police as saying the attacks involved the Islamic State of Iraq and Greater Syria (ISIS), though no group or individuals claimed responsibility in the hours following the blasts. Police said the attackers imitated the Nov. 13 terrorist attacks in Paris, which left more than 120 people dead.

Indonesia, which has the largest Muslim population of any country in the world, has long been both an incubator for and target of extremism. In July 2009, twin suicide blasts at the J.W. Marriott and Ritz-Carlton hotels left seven people dead, six of them foreign nationals.

The weakening of al-Qaeda affiliates in the country has not eradicated the threat of terror. At the end of 2015, Indonesian authorities arrested nine suspected militants in the country, underscoring anxieties over ISIS’s growing foothold in the country.

“Indonesian police have intercepted lots of plots, and if they missed one, like what happened today, we should remember there have been a high degree of [terrorism] activities,” Sidney Jones, an analyst at the Jakarta-based Institute for Policy Analysis of Conflict, tells TIME. “Arrests have been made in the past four weeks, and it underscores the concern about ISIS-linked groups — and they are not just in Jakarta, but also Central Java, Makassar, Bukittinggi.”

Indonesian President Joko “Jokowi” Widodo, who was in West Java when the blasts occurred, instructed the nation’s security authorities to “hunt and capture” the parties involved in the attacks.

“We express condolence to those who became victims, but we all also condemn the attack that caused restless among the community,” he said, before he arrived in Jakarta to inspect the bombing site in late afternoon.

— With reporting from Yenni Kwok 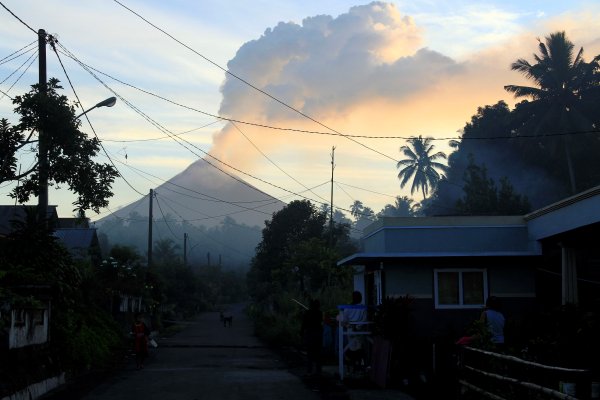 Watch a Volcano Erupt in Indonesia
Next Up: Editor's Pick