Sugar Warning Labels Get a Boost from Science

Nutrition labels are one of the tools that health experts use to educate people about unhealthy eating habits and even hopefully change them. In the latest study involving moms who were asked to choose drinks for their kids, researchers show that warnings about the unhealthy effects of sugar can steer them away from the sweetest drinks.

Christina Roberto, professor of medical ethics and health policy at the University of Pennsylvania Perelman School of Medicine, was inspired by recent attempts by city and state legislatures to place warning labels on sweetened drinks similar to the alerts mandated for tobacco products informing people of the health harms associated with using them. San Francisco passed such a law for sugar warnings, but it hasn’t been mandated, and the states of California and New York have also introduced similar bills.

But would they make a difference? To find out, Roberto and her colleagues generated some sugar-warning labels and attached them to beverages that they then showed to a group of 2,381 parents in an online survey. The parents, mostly mothers, saw either no labels (these were the controls), labels that noted the calories from the drinks, or one of three different warnings that basically alerted them to the fact that drinking beverages with added sugar contributes to obesity, diabetes and tooth decay. The drinks represented a wide array of popular beverages, from water to sugared sodas to fruit juices and sweetened teas.

The parents who saw the warning labels were on average 20% less likely to choose a sugared drink for their children when asked to pick what they would serve their children from a vending machine-like simulation.

There was no difference between the controls and those who saw the calorie information only, suggesting that the sugar information may be more salient for the parents than the calorie counts.

Roberto, who published her findings in the journal Pediatrics, admits that the conditions were a bit artificial—the parents were asked to make a hypothetical choice based on images of drinks they saw on a screen. But since none of the sugar warnings are yet a reality, this was the only way they could simulate how parents might react to them. She plans to study the effect of such warnings wherever they might first go into effect.

MORE: This Is What Happens to Your Body When You Eat Sugar

In the meantime, she’s confident that the 20% difference she recorded wasn’t due primarily to the parents trying to please the researchers and avoid the sweeter drinks with warning labels because that’s what they thought they were supposed to do. First, she didn’t observe the same effect for those seeing the calorie information. If the parents were purposely choosing what they thought were the healthier and more desirable options, then they would have avoided the higher calorie drinks as well, which they did not. Second, because the parents made their choices anonymously online, they likely felt less pressured by researchers than they would have in a face-to-face setting.

At this point, what the findings suggest is that as with tobacco, warning labels could be a useful tool to both educate and change people’s behaviors when it comes to choosing sugared drinks. “There is still room for some basic education [about sugar in drinks,]” says Roberto. “Although many may be aware that Coca-Cola has a lot of sugar, we have data that not everyone may be aware that other beverages may be high in sugar. There is a certain halo over drinks like Gatorade or Arizona Green Tea so there still needs to be some basic education.” The results suggest that parents are ready to learn. 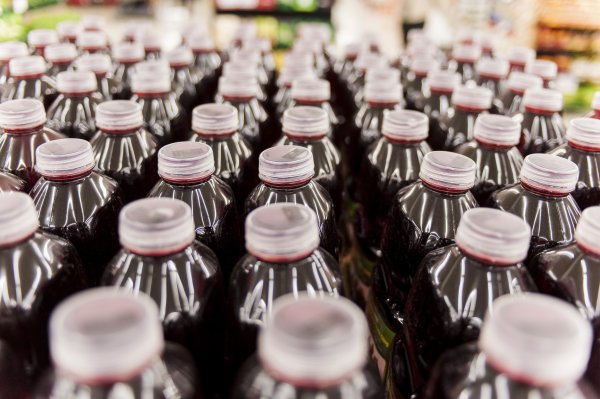 Drinking Soda Can Make You Store More Unhealthy Fat
Next Up: Editor's Pick