Protesters against President Pierre Nkurunziza and his bid for a third term march towards the town of Ijenda, Burundi, June 3, 2015. The election, resulting in a disputed win for Nkurunziza, was rocked by violence between his supporters and opponents.
Goran Tomasevic—Reuters
By Julia Steers / Bujumbura

Douce, 22, was standing with 4 other women when the men – dressed in police and military uniforms, armed with rifles and pistols – burst into their compound. They forced the women inside, firing into the air and demanding the women undress. “If you don’t take off your clothes, we’re going to kill you,” Douce recalls being told, describing the gang rape that occurred during a military and police search in late December, in Burundi’s capital, Bujumbura.

They were seven men, some in the uniforms of Burundian authorities and several in civilian dress – members of the ruling party’s youth wing, the Imbonerkure – according to the women present. The men raped all five women, who ranged in age from 22 to 50. “They were saying, ‘We’ll finish you all. Do you think when we’re done with your husbands and your brothers, you’ll remain? We have to eradicate you.’”

Douce lives in one of Bujumbura’s opposition quarters, neighborhoods that have suffered mass arrests and extrajudicial killings as Burundian authorities continue a months-long, brutal campaign that started in May to quell street demonstrations against current President Pierre Nkurunziza’s bid for a third term.

The population of Burundi, like that of its neighbor Rwanda, is divided between Hutu and Tutsi tribes who have vied for dominance since colonial times. In Rwanda in 1994, the rivalry descended into the killing of as many as million Tutsi and Hutu moderates by Hutu extremists.

Nkurunziza is a former Hutu rebel who became president 2005 after Burundi’s last civil war and has ruled ever since. Last year, there was a failed coup d’etat, which has driven the President to persecute political opponents. Around 250,000 of the country’s 10 million population have since fled.

Young men suspected of participating in the anti-third term protests have been the primary targets for systematic arrest, killings, and harassment by authorities in the capital. But in recent months, testimonies from local health workers, victims, and eyewitnesses point to a growing trend of rape and sexual assault of women in Bujumbura.

Local health workers in Bujumbura believe there has been a surge in sexual assaults in November and December as the cadence of military and police operations in opposition neighborhoods has increased. And like Douce, victims and witnesses in Bujumbura told TIME the perpetrators were a combination of men in the uniforms of police, military, special police, or known members of the ruling party’s youth wing, the Imbonerakure.

In their recently released report, Refugees International recorded 651 reported incidents of sexual assault by Burundian refugees who had escaped to Tanzania. Of these, 48% were rape survivors requiring medical care.

These numbers are “an indicator that rape is a facet of this crisis,” says Francisca Vigaud-Walsh, a senior advocate at Refugees International and author of the report. She notes that as men are disappeared or flee Bujumbura for their own safety, women in the opposition neighborhoods become “vulnerable in so many ways.”

Rape survivors at the Tanzania camp also listed the perpetrators as “security agents, Imbonerakure, police or military, or unknown,” according to Francisca Vigaud-Walsh.

“The nature of the crisis right now in Burundi is such that you’re either with us or against us, “ adds Vigaud-Walsh. “The fact that you might have a partner that has fled automatically makes you a target. You are potentially an enemy.”

Audrey, 25, described the evening of Dec. 11, when she says “police and Imbonerakure” forced her and her friend Emelyne inside her home, beat and undressed them, and stole their phones. “They made us sit on the ground. They started slapping us all over our bodies. They said, ‘Why are you fighting the president?’” she recalled. “He removed my clothes, my underwear. I felt like I was dying. But I couldn’t say anything because he was going to shoot me. He was holding his gun.”

Emelyne said: “One said, ‘you’ll show me where you’re keeping your weapons, ‘If you shout anything, I kill you like we did to the others outside.’”

Tucked in a back corner of a Bujumbura café, Jeanette was still too traumatized to speak about the incident but wrote down her account for TIME, explaining that as a police officer stood guard outside members of the Imbonerakure knocked down the door and entered the home. “The Imbonerakure came with the police to the home. They arrested the men and raped the women,” Jeanette wrote in French. “They kill the Tutsi men and rape the Tutsi women.”

The opposition neighborhoods in the capital are considered historically Tutsi areas of the city, in a country where ethnic divisions between Hutus and Tutsis have fueled past wars. Until recently, though, the civil unrest in Burundi has been defined as strictly political – and not ethnic – in nature.

In the last month, there are growing reports of ethnically-charged language used by Burundian authorities during operations in Bujumbura. TIME spoke to more than 20 witnesses who experienced anti-Tutsi rhetoric in offices, schools, while in prison, or in their homes during neighborhood raids. Nine women who were raped or sexually assaulted in various neighborhoods of the city repeat strikingly similar rhetoric used by their perpetrators.

Several victims said that their perpetrators left after undressing and robbing them, denying a rape took place. One woman claimed “God intervened” at the moment before the rape would have likely occurred.

Sources at a local women’s health center say often, even when rape victims here do seek treatment, they do not verbally admit to being raped, because of shame and stigma.

Sources at a U.N. agency that funds community health centers say for every one rape reported recently, they believe the actual instances are much higher. “From our work here we know that when you have one case in the center, you have 20 in the neighborhood,” the source said. “And among the actors, we have members of police. We know this. In addition to police, we have the Imbonerakure doing this.

“Near the health centers, there are these youth militia members demanding bribes, asking, ‘Why are you coming here?’ The women don’t want it known they are rape victims.”

The government says they have opened an inquiry into the recent allegations of rape by security forces but insist the reports are “baseless and absolutely wrong,” according to deputy presidential spokesman Jean-Claude Karerwa.

When presented with victim accounts, Karerwa dismisses them “a media hype against Burundi to get the international community to feel there is a need of military intervention in Burundi.

“If some women have been raped, I can tell you it has not been done by our defense and security forces, because that kind of behavior is not condoned by the government of Burundi.” 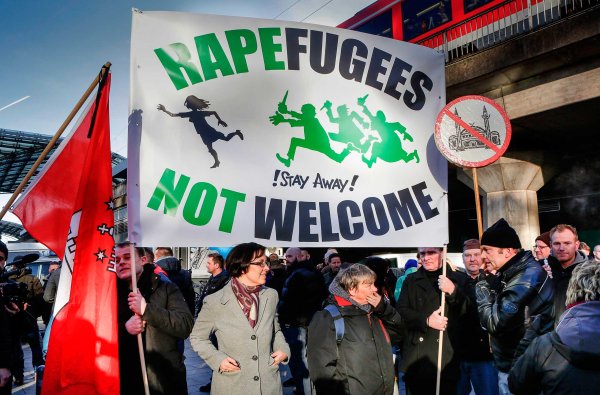 Why Germany's Plan To Deport Criminal Foreigners Won't Work
Next Up: Editor's Pick