How the 2016 Candidates Would Spend the Powerball Jackpot

Even some of the candidates running for President of the United States can’t resist the allure of the record-breaking $1.5 billion jackpot in Wednesday night’s highly anticipated Powerball drawing.

Hillary Clinton told Good Morning America on Wednesday that she bought a Powerball ticket. What if she wins?

The jackpot is more than 13 times the $112 million that Clinton’s campaign raised in 2015.

A supporter gave Republican presidential candidate Jeb Bush a campaign contribution in the form of a Powerball ticket as the former Florida governor left a rally on Saturday, according to CNN.

“I just want to make sure you realize this is not for me personally,” Bush said. “If we win, I’m sure it will be a [Federal Election Commission] violation, but it’s all going to a really good cause.” Bush was surely referring to the fact that the donation of a winning Powerball ticket would violate, by far, the cap on individual contributions to campaigns.

It’s also possible that a lottery win, unlikely as it may be, could have the effect of turning someone into a presidential candidate.

In an interview with the Today show on Tuesday, Vice President Joe Biden—who announced in October that he would not run for president but has said he regrets the decision—was asked if he could think of a scenario that would draw him into the 2016 race.

“I’ve learned never to say no, but I can’t imagine one,” Biden said.

“If I win the lottery maybe,” he added, before clarifying that it was a joke.

He said he hasn’t bought a ticket. 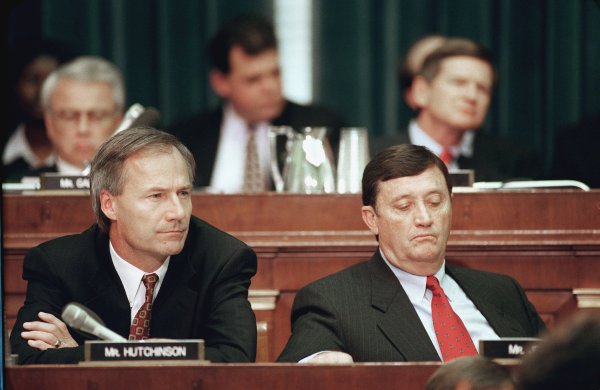 GOP Gov Who Helped Impeach Clinton: 'Move On'
Next Up: Editor's Pick