4 Things Obama Didn't Say at the State of the Union

President Obama’s final State of the Union address eschewed the typical laundry list of proposals for a more thematic approach. But that meant a few hot issues were left out.

A White House official said Tuesday before the State of the Union that just because an issue isn’t mentioned in the speech, that doesn’t make it any less important to the president’s second term. But that’s cold comfort for activists and others who were hoping for the president to talk at least briefly about their cause.

It’s worth noting, though, the issues the president did not mention during last night’s address. Here’s a look at five things Obama didn’t say.

After a weeklong foray into the issue of gun control, an area that the president has been unable to make headway on in his second term, the president merely glossed over the topic in his State of the Union speech. A chair was purposefully left vacant in the First Lady’s guest box on Tuesday in memory of victims of gun violence in the U.S., but aside from a brief mention in the collection of things the president wants to accomplish over the next year the topic went untouched. The Brady Campaign to End Gun Violence issued a statement following the speech saying the address would have been a great opportunity for the president to direct his ire at the body that is blocking further action.

“There is so much more work to do to address an epidemic that claims the lives of 90 Americans every single day,” Brady Campaign president Dan Gross said in a statement. “Much of that work falls on the shoulders of the Congress he addressed tonight and we wish the President would have made that more clear by calling on Congress to put the safety of the American public ahead of the interests of the corporate gun lobby.”

Yet the issue is such a point of contention for the president and the Congress, which is home to many members who say the president’s recent executive actions and entire stance on guns threatens legal gun owners and the Second Amendment. Given that, it makes sense for him to have left it out of last night’s speech. The goal was present an air of optimism and promote unity in Washington–the gun debate pretty much represents the opposite.

Military Times noted ahead of last night’s address that unlike his predecessor, the president has largely shied away from devoting significant portions of his States of the Union addresses to veteran issues and the military. Last night was no different.

The military got a glimmering shout out: “Our troops are the finest fighting force in the history of the world,” Obama said Tuesday. “No nation dares to attack us or our allies because they know that’s the path to ruin.”

But the issues facing veterans were also only symbolically represented in the First Lady’s guest box. One of the First Family’s invitees was Cynthia Dias, a former Vietnam War nurse who has experienced bouts of homelessness and suffers from post traumatic stress disorder. The President and First Lady clearly take the issue seriously—the First Lady’s Joining Forces initiative puts military and veterans issues in the forefront and the president issued a national call to decrease veteran homelessness by 2015.

According to an analysis by Think Progress, veteran homelessness has declined by 35% under the president, meaning about 25,600 fewer people have unstable housing.

In a post for Mashable, activist DeRay McKesson wrote “The young protestor that you so candidly acknowledged in 2009 is your citizen, too, President Obama. Will you speak to her reality in your final State of the Union? Will you be bold enough to remind the American people that challenging this government to live up to its commitments is at the core of the American tradition?”

But Jen Psaki, the White House director of communications said ahead of the delivery on Tuesday the issue of race didn’t fit into last night’s speech. It’s an issue he’s been speaking more candidly about in his second term, sure, but last night’s speech was about the broader topic of division. (Though, in an apparent swipe at Trump, President Obama explicitly invoked the candidate’s proposed ban on Muslims.

“When politicians insult Muslims, when a mosque is vandalized, or a kid bullied, that doesn’t make us safer,” he said.

Ahead of the speech, Psaki explained why Black Lives Matter wasn’t getting a line in the speech. “The president is going to talk a lot about division in the country and the fact that the American people are less divided than Washington and dialogue and disagreeing without being disagreeable is something that we should all strive to do more of,” she said. “Will he mention Black Lives Matter specifically? No. But there are a lot of issues that he will talk about that are related to what more we can do to bridge the divide in the country.”

The omission was glaring to Alicia Garza, a co-founder of the Black Lives Matter movement, who sat in the House Chamber on Tuesday as an invited guest of Democratic Rep. Barbara Lee of California. After, she said in a statement to TIME, she was “deeply disappointed” that the president didn’t speak to the issues facing black people in America. “He has long retreated from addressing tragedies rooted racism and transphobia and tonight was no exception,” she said. “I can only hope his actions speak louder than his words.”

Psaki, again, explained: “it’s important for people to remember that just because it’s not mentioned in the speech, especially this year, it doesn’t mean it’s not an issue he won’t continue to talk about or isn’t focused on.”

It’s worth noting that the issue was alluded to in the speech when Obama said, “The protester determined to prove that justice matters, and the young cop walking the beat, treating everybody with respect, doing the brave, quiet work of keeping us safe.”

Hours before the State of the Union address, news broke that 10 U.S. sailors had been detained by the Iranian navy after the American vessel likely drifted into their territory. The State Department worked swiftly to ensure the safe return of the soldiers, which White House Chief of Staff Denis McDonough attributed to the improved relationship between the U.S. and its Iranian counterparts during a Christian Science Monitor breakfast on Wednesday is thanks to new, open lines of communication.

The swift return of the sailors, too, likely links back to the Iran nuclear deal being worked out between the two countries. Though the historic deal was noted in the address, the state of the sailors was not. That could be because the events were changing too quickly to be worked into the address as well as the fact that it didn’t tie neatly into Obama’s message about rapprochement. Iran’s Foreign Minister touted the diplomacy both countries displayed on Wednesday.

Happy to see dialog and respect, not threats and impetuousness, swiftly resolved the #sailors episode. Let’s learn from this latest example. 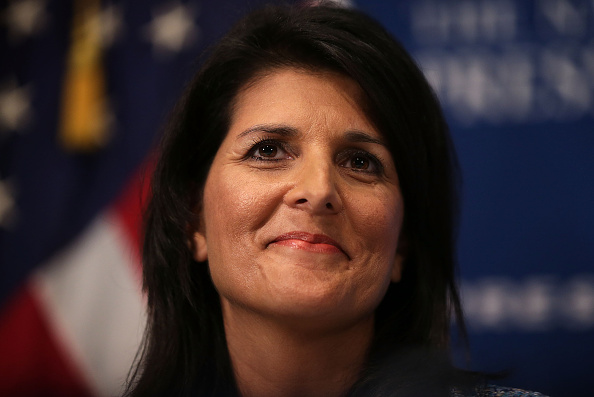