Demonstrators with the group Witness Against Torture dress in orange jumpsuits and wear black hoods while demanding that U.S. President Barack Obama close the military prison in Guantanamo, Cuba, outside the White House in Washington, DC.. on Jan. 8, 2016.
Chip Somodevilla—Getty Images
Ideas
By Julia E. Rodriguez
Julia E. Rodriguez is a professor of history at the University of New Hampshire.

During his State of the Union address Tuesday, President Barack Obama mentioned his efforts to close the Guantánamo Bay detention center, now in its 15th year. “I will keep working to shut down the prison at Guantanamo: it’s expensive, it’s unnecessary, and it only serves as a recruitment brochure for our enemies.”

As the family member of a victim of the attacks of Sept. 11, 2001, I recently visited the infamous facility where the men accused of planning those attacks are being held and tried. In Guantánamo, I reflected on the meaning of justice—what it means to me, and what it means to my country. My family deserves justice. But Guantánamo can’t bring us that justice and should immediately be closed.

My brother, Gregory Rodriguez, was a 31-year-old information technologist at Cantor Fitzgerald, a firm that lost three quarters of its employees on Sept. 11. Greg, two years younger than I, was my only sibling. Something precious was taken from our family, and our lives have changed in incalculable ways since that day. Eventually the shock, the guilt, the flashes of anger and the denial subsided, and I faced the unavoidable conclusion: My brother Greg is gone. Nothing will bring him back. My family and I will have to deal with that for the rest of our lives.

But because Sept. 11 was a very public crime, we have been involuntarily thrown into a very public trial. Sitting in the military commissions courtroom in Guantánamo Bay this December, part of a group of 9/11 victim family members invited by the Office of Military Commissions, I watched and listened to a week of pretrial hearings of five men accused of conspiracy and planning of the attacks. What I observed during my recent experience witnessing the hearings in Guantánamo raised uncomfortable questions about this system’s ability to bring real justice.

I was first struck by the sheer amount of time that has already passed. In Guantánamo, a frequent refrain from victim family members, our military escorts and both legal teams was “how long” it’s taking. One defense lawyer predicted another five to 10 years of pretrial hearings, and that’s before the actual trial can even commence. Personally, I’d rather the case go on for years if that’s what it takes to achieve justice. But only a fair trial that protects the core rights of all involved can bring true justice.

There is a murkiness and lack of transparency to these proceedings that creates serious doubt that they are fair. The distant location means that all the legal teams, judges and observers need to travel on flights organized by the military, increasing the price tag and limiting courtroom time. The general public has no chance to witness the proceedings, despite the fact that many sessions are unclassified.

The entire system is complex and difficult to navigate. The five defendants are not prisoners of war, yet are being held in a military compound and tried before a military judge for what amounts to federal crimes. Both legal teams have commissioned officers as well as civilian attorneys. This complexity and uncertainty contributes to the delays and confusion. Other terrorism-related proceedings before these military commissions have already been overturned by federal courts, leaving the impression that these years of procedure could all be for naught. At the same time, the opposite outcome could occur—since the prosecution is asking for the death penalty, it’s possible that the five men could be executed without fair trial.

We cannot discuss the military commissions in Guantánamo without discussing detainee treatment. The 2014 Senate report on the Bush-era CIA interrogation program confirmed what many human-rights observers already suspected: that numerous detainees were tortured by the CIA with approval from the administration. In the case of the 9/11 Five, the defendants are being detained and tried by same government that tortured them. This is a big legal problem, and a bigger moral problem.

These problems cast a shadow on the legitimacy of our justice system to try the men accused of the biggest crime in U.S. history. We pride ourselves on our Constitution, on the rule of law and on the reputation of the U.S. as a protector of human rights, yet Guantánamo’s indefinite detention and unfair trials persist. These individuals should be charged and tried according to international fair trial standards, which is what the U.S. urges the rest of the world to do.

In these times of mounting violence worldwide, we cannot afford to compromise our nation’s confidence in human rights and the rule of law. We must live up to our highest ideals, the principles of fair trial and protection from torture. Nothing will bring my brother back. But perhaps one day soon we can remove the obstacles to real justice for his death. 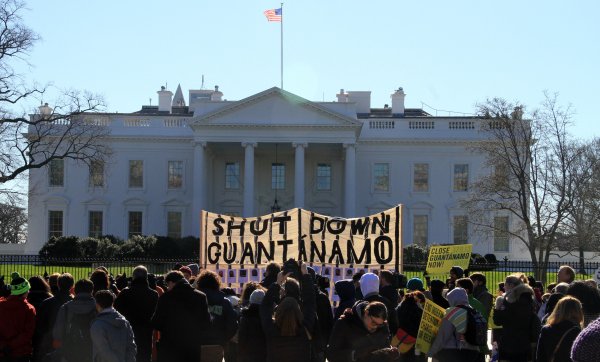 Why Obama Hasn't Closed Guantanamo Bay—and Probably Never Will
Next Up: Editor's Pick