Protesters hold banners during a protest in front of the White House in Washington D.C. on Jan. 11, 2016.
Erkan Avci—Anadolu Agency/Getty Images
Ideas
By Jack Goldsmith
Goldsmith is a Harvard Law School professor and a senior fellow at the Hoover Institution; he was an Assistant Attorney General in the George W. Bush Administration.

For months the Obama administration has raised the stakes on its seven-year pledge to close the Guantanamo Bay detention center. In November three former senior Obama administration attorneys argued that the president had the constitutional power to ignore the legal restrictions Congress has placed on bringing dangerous detainees to the United States. Presidential aides suggested that the White House was taking the argument seriously. And then last week, in preview interviews for the President’s State of the Union address, Chief of Staff Denis McDonough put down a marker about Guantanamo. The President “feels an obligation to his successor to close that, and that’s why we’re going to do it,” he said on Fox News.

It was thus somewhat of a surprise that the President mentioned Guantanamo in a single, half-hearted sentence in his State of the Union address. “I will keep working to shut down the prison at Guantanamo: it’s expensive, it’s unnecessary, and it only serves as a recruitment brochure for our enemies,” he said.

But the President said nothing about how he intends to shut down the prison. His administration has promised Congress a concrete plan to do so for a long time. “I have asked for six and a half years for this administration to come forward with a plan — a plan that we could implement and close Guantanamo,” said Senator John McCain in November. The Pentagon pledged that it would finally reveal its plan the week McCain made this statement, but nothing came. McDonough again promised a plan last week, which is why many people expected more detail from the President in his address.

The reason the President has not yet proposed a plan for closing the Guantanamo Bay detention facility, and the reason he said so little about it in his self-consciously upbeat address, is that he lacks a plausible path to doing so.

The President’s other option is to defy the transfer ban, as his former attorneys advised. But their argument is weak. “There’s very little to be said for” the argument, according to Marty Lederman, Obama’s former Deputy Assistant Attorney General in the Justice Department Office of Legal Counsel, the Office that will advise the President on the legality of any such move. Lederman notes that a constitutional override argument “would present the same dangers, and threaten to establish the same troubling precedents, as when President Bush claimed the constitutional authority to disregard laws” related to national security — an authority, of course, that President Obama once vehemently disclaimed.

Even if the President accepts the constitutional argument, he still faces obstacles. He has only a year to find and prepare a U.S. prison to house the detainees. This is not a long time, especially since Congress has barred him from spending funds to do so, which presents additional legal challenges.

The President can power through all of these obstacles if he is determined and acts fast. With the swirl of his pen he could simply order subordinates today to begin the process of transferring the detainees to the United States in defiance of laws he has complied with for years. It is unclear whether a court would adjudicate such a brazen move, and even if it did, any judicial ruling would come too late to prevent it.

And yet despite McDonough’s insistence that the President is “going to do it,” he likely won’t. The President wants to close the Guantanamo Bay facility before leaving office to fulfill his first-week pledge and enhance his legacy, which he is thinking about a lot these days. Presidential legacies are difficult to assess because they “depend on the climate in which historians render their verdicts,” noted Arthur Schlesinger, Jr. But it is hard to see how closing Guantanamo unilaterally will burnish President Obama’s legacy in the short run or the long run.

Support for closing Guantanamo peaked in President’s Obama’s first year, and most Americans now oppose transferring the dangerous detainees to the United States. A provocative defiance of a law that embodies the popular will on an issue of national security by a late-term President whose seriousness in that context has been questioned lately would be unpopular and controversial. Congress would go ballistic. The issue would not go away in the next administration, as Republicans and many Democrats would try to reverse the President’s move. President Obama would thus be doing his successor no favors. He or she, and the presidency, would suffer dealing with the fallout. Candidate Clinton might be hurt by the fallout sooner if the President puts in motion the Guantanamo closure before the election, which he almost certainly will need to do.

And what would the president’s legacy gains be, assuming the transfer sticks? He would have followed through, finally, on his first-week pledge to close Guantanamo. He will argue in his memoirs that he restored core U.S. values and dampened terrorist recruitment.

But these arguments are likely to ring hollow. The terrorist threat will persist no matter what happens with Guantanamo. Historians will wonder why the President did so little to work with Congress to close Guantanamo, especially early on when he had more leverage. They will discount any achievement of unilateral closure as a result of the messy consequences that followed.

Most importantly, over time it will not seem like the President changed the value equation. Fifty dangerous terrorists would remain in indefinite detention in a U.S. maximum security prison where they would likely have less freedom of movement than on the sunny and secure Cuban island. A new round of litigation would ensue, but Congress would quickly bolster the already-strong legal basis for detention, and courts that had no trouble upholding indefinite detention in Cuba would be unlikely to order the terrorists’ released into the United States. It won’t take long for critics on the left to talk about the stain of indefinite detention that President Obama alone brought to U.S. soil, a stain that critics on the right will say that the President bought at the price of the rule of law.

President Obama’s long equivocation on this issue implies that he understands these consequences. His least bad option, it seems, is to appear to want very much to close Guantanamo (which he does), and to talk and act as if he is doing all he can, but to capitulate in the end. So expect that long-promised plan finally to come out soon; expect Congress to reject it; expect the President and his Team to publicly anguish over closing Guantanamo unilaterally; expect them to decide in the end that the rule of law — which the President holds dear and will play up in his memoirs — forbids it; and expect fifty or so dangerous terrorists to be locked up in indefinite military detention in Guantanamo when the next President assumes office on January 20, 2017. 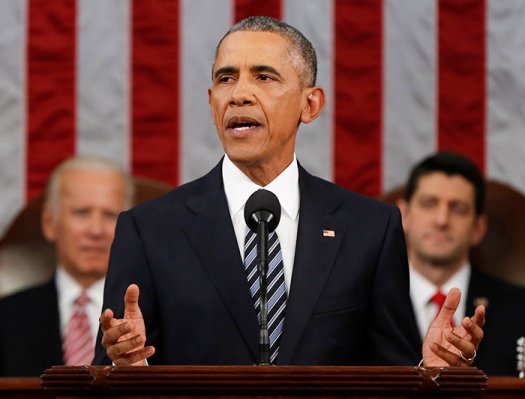 Obama's Optimism Isn't Shared by All Millennials
Next Up: Editor's Pick