Every Monday, when the right-wing fringe in Germany tends to hold protests against immigration, Peter Heinz goes into the streets of his hometown of Leipzig and, in any weather, takes part in the counter-demonstrations. A quiet type by nature, the 48-year-old usually takes a candle with him and stands across the street from the xenophobes, reminding them, as he puts it, “that this is a welcoming place for all.”

Over the past year, such dueling demonstrations – for and against tolerance, for and against the integration of Muslim refugees, and, by extension, for and against the open-door policies of Chancellor Angela Merkel – have become a staple of German political life. Nationwide, the balance of forces has stayed much the same even as more than a million asylum seekers have come streaming into Germany. The rallies in support of welcoming the newcomers have tended to outnumber, usually by a wide margin, those who want to turn them away.

Only in the past week has that dynamic begun to shift. The turning point seems to have come with Silvester, the German word for New Year’s Eve, when gangs of migrants allegedly went around groping, robbing and sexually assaulting hundreds of women during the celebrations in several German cities. By far the worst attacks took place in Cologne, the ancient cathedral city in the west of Germany, where more than 500 victims have come forward – about 40% of them alleging sexual assault. The perpetrators, according to police, were mostly young men from the Middle East and North Africa, some of them newly arrived as asylum seekers, others in the country illegally.

Almost overnight, these revelations have punched a hole in Germany’s Willkommenskultur, or “welcome culture,” which Chancellor Merkel has characterized as a kind of national ethos. A survey conducted Jan 8-11, right after the New Year’s Eve attacks were widely publicized, found that 62% of Germans feel the number of incoming asylum seekers is now too high, up from 53% in November. Only 16% said the current refugee numbers are acceptable. Forced to respond, Merkel’s government has pledged to deport migrants who violate German law. But that measure has not done much to deflate the rhetoric coming from the radical right.

On Monday night, the nation’s most vocal movement against immigration, which calls itself Pegida, held a massive rally in Leipzig to capitalize on the shift in the national mood. As usual, their primary target was Merkel, with one placard showing the Chancellor in a Muslim headscarf next to the words: “Take your Muslims with you … and get lost!!!”

But this time, the group’s leading orator, Tatjana Festerling, had some fresh talking points to work with. Muslim migrants, she said, had declared a “sex jihad” in Germany on New Year’s Eve. “These Muslim refugees have begun an all-out terror attack against German women,” she said from atop a stage set up on the back of a truck. “Against blonde, white women,” she said.

To many of the Pegida faithful, the New Year’s Eve attacks have felt like a vindicating call to arms. “They show that everything we warned about is true,” Festerling told me after finishing her speech on Monday night. “Integration is not possible.” In public, at least, she and her fellow activists renounce violence of any kind against refugees. But the most radical wing of their movement has still turned to vigilantism over the past week. One of the most destructive incidents took place on Monday night in the outskirts of Leipzig, just as Festerling was addressing the crowd a few miles away in the center of the city.

In the southern neighborhood of Connewitz, an ethnically diverse quarter of Leipzig that is popular among students, lefties and punk rockers, a gang of about 100 skinheads went on a rampage through Wolfgang Heinze Street, smashing most of the storefront windows and lighting fires along several city blocks.

By the time the mob reached his kebab shop at around 8:00 in the evening, Hossam Gawisa, an Egyptian immigrant, barely had time to rush his customers out the backdoor. “The Nazis just ran in and broke everything,” he says the next day while surveying the damage. “They didn’t say a word.” One of the attackers set off an explosive that tore through the metal sink beside the cash register and ripped a hole in the ceiling. The restaurant’s bank of propane canisters, thankfully, did not explode.

In a statement issued the following day, the city’s police force said five officers were wounded amid the rioting in Leipzig, while more than a hundred men with “right-wing motivations” were arrested. But this was not an isolated incident. The previous day, another group of about 20 right-wing goons went around attacking foreigners in Cologne. According to local media, six Pakistanis and one Syrian were injured in those attacks.

Taken together, the spike in violence shows just how volatile race relations in Germany have become since New Year’s Eve. But it is far from clear that these hostilities will translate into broader support for the radical right. Merkel’s approval ratings remain comfortably above 50% in the latest polls, with no real challenger in sight, while the Pegida demonstration on Monday in Leipzig did not seem to attract many fresh converts to its cause.

Instead there were roughly a thousand of the group’s usual diehards, many of whom seemed more enthusiastic about the rally’s hot-dog vendor than any of the vitriol coming from the stage. As Festerling admitted, a lot of the attendees that night had been encouraged to come from other cities. “It’s typical of Leipzig,” she says when asked about the disappointing turnout. “The left is very strong here.”

Indeed, across the street, Heinz and the other counter-demonstrators still seemed to outnumber the nationalists, and their sense of tolerance toward refugees did not seem much affected by the New Year’s Eve attacks. Still, even the Germans most committed to tolerance have had to face a painful question in the past week: What if they had been the victims of the sexual violence in Cologne?

Shirin Amara, 28, and her younger sister Maram, glanced at each other uncomfortably when I asked them this during the anti-Pegida rally on Monday. “I think this would change my mind about the men who do such crimes,” Shirin, a doctor, said finally. “But it would not change my mind about all refugees.”

Standing nearby at the demonstration, Heinz, who works at the city’s environmental protection office, says he agrees. “It’s our responsibility to integrate them,” he says of the migrants, “to start a dialogue and say, ‘Hey, these are the rules in Germany, this is how you must behave.’” To the supporters of Pegida, this attitude might seem naïve to the point of self-delusion. But Germany’s welcome culture seems unlikely to survive for long without it. 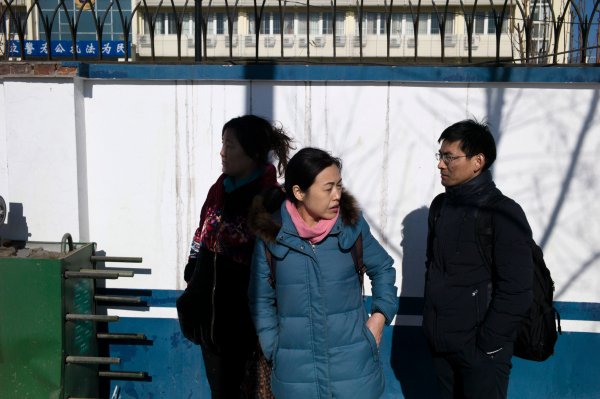