President Obama announced Tuesday in his final State of the Union that Vice President Joe Biden would spearhead an initiative to cure cancer.

“Last year, Vice President Biden said that with a new moonshot, America can cure cancer,” Obama said, before noting that Biden has worked with Congress to add resources for the National Institutes of Health. “Tonight, I’m announcing a new national effort to get it done. And because he’s gone to the mat for all of us, on so many issues over the past forty years, I’m putting Joe in charge of Mission Control. For the loved ones we’ve all lost, for the family we can still save, let’s make America the country that cures cancer once and for all.”

President Barack Obama gestures to Vice President Joe Biden during the State of the Union Address in Washington on Jan. 12, 2016.
Saul Loeb—AFP/Getty Images

This comment got enormous applause, as the President turned to Biden and went off script, saying, “What do you say, Joe?” Biden gave him a thumbs up, to more applause. “Let’s make it happen,” President Obama said. 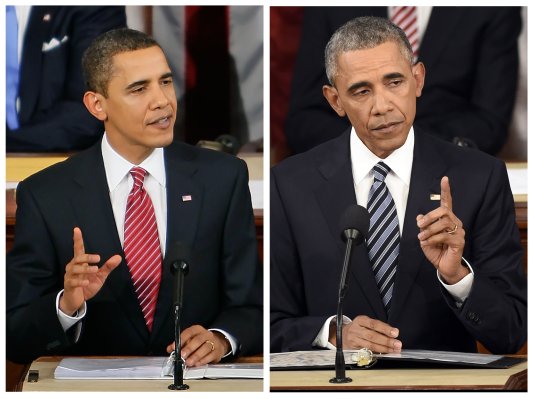 See How President Obama Has Aged Since His 2009 Address
Next Up: Editor's Pick