Here's the Most Unorthodox Idea From the State of the Union

In listing the ways that government can help unemployed Americans get back on their feet, President Obama mentioned a handful of familiar policies — unemployment insurance, job-training programs — and then threw a curveball: Why not have wage insurance too?

“Say a hardworking American loses his job — we shouldn’t just make sure he can get unemployment insurance; we should make sure that program encourages him to retrain for a business that’s ready to hire him,” Obama said during his State of the Union address Tuesday night. “If that new job doesn’t pay as much, there should be a system of wage insurance in place so that he can still pay his bills. And even if he’s going from job to job, he should still be able to save for retirement and take his savings with him.”

The line got applause and sent the wonks on Twitter aflutter, but it left most people drawing a blank: What’s wage insurance?

In a nutshell, it’s a government entitlement that keeps low- and middle-income workers’ wages from dropping below a certain benchmark.

Unlike unemployment insurance, which attempts to provide a buffer for workers that have temporarily and involuntarily lost their jobs, wage insurance protects workers against future losses in earnings too, in case they have no choice but to accept a lower-paying job in order to get re-employed.

Unlike universal income, which is a mostly liberal-backed idea that would provide a standard wage to every American regardless of employment status, wage insurance would only be accessible to working people who involuntarily lost a job and then got another, less-well-paying one.

In the past, support for wage insurance has actually been pretty bipartisan. Democrats liked it because it’s a government entitlement aimed squarely at working and middle-class Americans, and Republicans liked it because it requires that people keep working — even if it means taking the first job they can get.

Most existing wage-insurance proposals — which, for the most part, languish in think-tank archives — have built-in ways to keep people from gaming the system. For example, some proposals suggest calibrating payouts so that no American would voluntarily be on wage insurance: if it was possible for you to get a better-paying job, it would be in your economic interest to snag it.

Other proposals suggest that it would apply only to salaries below a certain salary level. So if you’re making $200,000 and you lose your job and get a new one that pays you only $150,000, then this program isn’t for you.

Wage insurance became popular among the economic intelligentsia about 25 years ago, right about when it became apparent that powerful forces in the modern economy — free trade, globalization, technologization — were both juicing the national GDP and permanently eliminating good, American jobs (and replacing them with less good, lower-paying ones).

Read More: Obama Puts Terrorism in Perspective in State of the Union

For example, bank tellers, which used to be paid relatively well, have seen their ranks decimated by the ATM. While that might be good for the economy writ large — think of all those ATM repairmen! — it’s not good for that individual bank teller, who now works as, say, a dishwasher, making significantly less.

Wage-insurance aficionados argue that the answer to that conundrum is not to try to stop those larger market forces — we can’t stick a wrench in the rapid advance of technology — but to take the gains that those forces deliver to the larger economy and reinvest them into working Americans’ salaries.

If that former bank teller used to make $700 a week and now makes $450 as a dishwasher, then wage insurance would compensate some portion of those lost wages — keeping the worker above the poverty line. 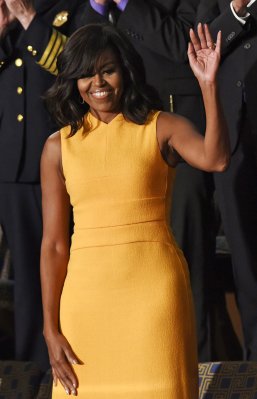 Here's Where Michelle Obama Bought Her State of the Union Dress
Next Up: Editor's Pick