Obama Puts Terrorism in Perspective in State of the Union

President Obama basically told the nation to take a “chill pill” over the threat posed to Americans by ISIS and other terrorists in his final State of the Union address Tuesday night.

“Over-the-top claims that this is World War III just play into their hands,” Obama said. “Masses of fighters on the back of pickup trucks and twisted souls plotting in apartments or garages pose an enormous danger to civilians and must be stopped. But they do not threaten our national existence.”

Echoing the views of most non-politicized U.S. terrorism experts, he urged the nation to keep terror attacks in perspective. The priority, they say, is to keep nuclear weapons away from terrorists and deny them the ability to launch 9/11-like attacks. But smaller-scale terror, like the killing of 14 Americans in San Bernardino, California, Dec. 2 by a husband-wife team of radicalized Muslims, may be impossible to prevent.

While Obama may have the facts on his side, people’s irrational fears often overwhelm facts. It’s the politician’s job to acknowledge that fear, while harnessing it to keep the facts that fuel it from getting any worse. That’s where Obama has fallen short.

His message was muddled as Iran held 10 U.S. sailors as he spoke. Iran seized them several hours before the speech, after their two patrol craft apparently drifted into Iranian territorial waters near Iran’s Farsi Island in the middle of the northern Persian Gulf. The Obama Administration said it had assurances from Tehran that the sailors and their boats would soon be released. Obama didn’t mention them in his address.

Calming fears of terrorism remains a challenge. Obama erred, at least politically, when he called ISIS a “JV team” two years ago—before it started beheading Americans—and said it was “contained” just before the terror attacks in Paris and California killed 144.

Americans’ preoccupation with terrorism, while understandable, stands in marked contrast to their toleration for other kinds of violent death. In 2014, 32,675 U.S. residents died in highway accidents, 33,599 died by firearms—and 17 were killed in terror attacks on U.S. soil. That preoccupation can warp public attention and investment—and makes an over-reaction (cf., the 2003 invasion of Iraq) more likely if another major terror attack were to occur.

“Public opinion poll data show that the United States suffers a long-term, routinized, mass anxiety—or at least a sense of concern—about terrorism that has shown little sign of waning in the years since 2001,” terrorism analysts John Mueller and Mark Stewart wrote last month in Foreign Affairs. “Although other issues—particularly economic ones—often crowded out terrorism as a topic of daily concern, terrorism has won an apparently permanent space in the American mind.”

By most accounts the world, in fits and starts, is becoming more peaceful. Put bluntly: you have less chance of dying in war today than in the past. But such reassurances can be fleeting. Sure, the Atlantic and Pacific oceans acted as walls against invaders for most of the nation’s history. And the advent of nuclear weapons 70 years ago stayed the hands of nation-states when it came to warring against one another.

But terrorism—designed to inflict fright—is a different beast. First, because of its relatively small scale, it can be unleashed nearly anywhere, against nearly anyone. Terrorism doesn’t target soldiers on the battlefield—who, by and large, are young men who know their mission is dangerous. Instead, terrorism targets civilians, including children, going about their daily lives. It’s that jarring juxtaposition—the idea that one isn’t truly safe, anywhere—that lets terrorism pack a punch far above its throw-weight class.

The turning point in the U.S. attitude toward terror, justifiably, was 9/11. For most Americans, the attacks that day came clear out of the blue, raining horror on a U.S. public who believed that such violence, when it happened, took place in troubled lands far away, like the Middle East. The willingness of the perpetrators to die in their lust to kill surprised, and scared, many Americans. While that fright has ebbed and flowed, it hasn’t gone away, and surges anew in the wake of terror attacks.

Read More: Read the Full Transcript of Obama’s Final State of the Union

Following the attacks on the World Trade Center and the Pentagon—and a hijacked airliner brought down in rural Pennsylvania by passengers whose delayed takeoff let them learn of their grim fate—Americans were filled with a sense of foreboding that more major attacks were all but inevitable. But that hasn’t happened.

The 9/11 hijackers fired vulnerable U.S. airliners into defenseless U.S. buildings and killed nearly 3,000. In other words, the only way they could carry out their plot was if they outfitted themselves with U.S. equipment. Following the attacks, local, state and federal governments have built, or bolstered, defenses against future terror strikes.

There hasn’t been a similar attack on U.S. soil—fingers crossed—in nearly 15 years. That’s the key fact to keep in mind, amid the fusillade of fear-mongering the 2016 presidential campaign has already unleashed. 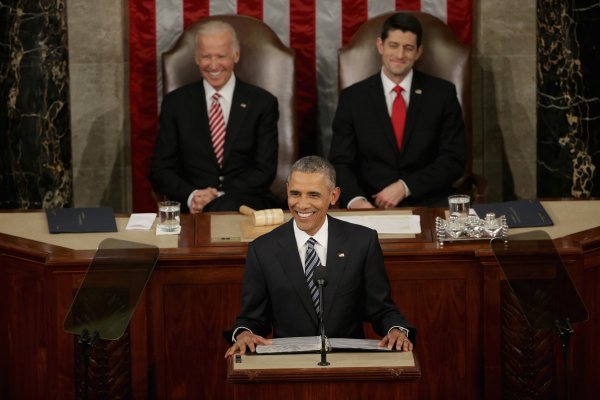 Read the Full Transcript of Obama's Final State of the Union
Next Up: Editor's Pick