If you’ve just won the world’s largest lottery, you’re probably looking to Scrooge McDuck dive into a vault of gold coins to celebrate your life-changing new wealth. The options are endless after scoring the $1.5 billion Powerball jackpot. Here are some possible purchases to consider:

Don’t let your luck run out even if there’s an apocalypse. Millionaires have a chance to ride out doomsday in style with an underground luxury bomb shelter, complete with pool, movie theater, library, an on-site private school, a community garden for planting fruits and vegetables and a built-in state of the art security system—all priced at $2 million per floor. Kansas entrepreneur Larry Hall had sold at least four of these bunkers as of 2012, AFP reports. One line of survival condos costs $1.5-3 million.

Sometimes you just need 9 million doughnuts that are covered with icing made with Cristal champagne and 24-karat Gold. A New York City restaurant can make your dreams come true for $100 a piece. You could save some of your fortune by buying them by the dozen.

The Playboy Mansion—with Hugh Hefner as your tenant

The Playboy Mansion went up for sale Monday for $200 million, and the five-acre West Los Angeles estate comes with 29 rooms, a game house, home theater, wine cellar, a rare zoo license and the swimming pool with a grotto where Playboy bunnies are known to party. Hefner is also part of the package.

Read More: How to Watch the $1.5 Billion Powerball Drawing Live

Your own personal Killer Whale Submarine

Plunk down your newfound cash on a Free Willy-style adventure. Hammacher Schlemmer in 2012 designed a $100,000 Killer Whale Submarine that can breach from the water and even looks like a real whale, CNET reports. It travels underwater at 25 mph. Titanic and Avatar director James Cameron partially purchased an $8-12 million submarine to set a new record in 2012 when he spent six hours underwater collecting footage for National Geographic.

The world is a scary place. Protect yourself with a James Bond-like briefcase that turns into a ballistic shield. The $479 item was made by China’s Leison Global to safeguard businessmen and women working in dangerous environments, Bloomberg reports.

Your own at-home emergency room

Leaving the house is overrated when you’re a billionaire. Now you can build your own emergency room at home for about $1 million. Rich people can forgo health insurance if they pay a monthly fee, totaling up to $30,000 per year, for concierge medicine, the Huffington Post reports.

The biggest backyard pool in the world, located beside a mansion in Texas, costs over $3 million. The tropical getaway boasts a 40,000-square-foot main pool that takes 750,000 gallons of water to fill, six waterfalls, a 21-foot slide, a 500-foot lazy river, a bar, an outdoor kitchen and a kiddie area, according to Curbed.

A personal fleet of private jets

Fly everywhere in your own Gulfstream G650, which is the biggest and fastest private jet in the market, according to Business Insider. At $65 million a piece, you can have one for yourself and buy some more for about a dozen friends—or you can keep all 12 to yourself.

Kim Kardashian and her husband Kanye West last summer reportedly spent about $722,000 on a king-sized bed that floats up to five feet off the ground. Or you could just buy the celebrity couple’s entire Los Angeles mansion for about $20 million.

Apple Watches for all your pets

The son of China’s richest man ticked off some social media users last May when he bought $28,000 worth of Apple Watch products for his dog, CNBC reported. American pet lovers can one-up him multiple times now.

The cash payout of the largest lottery prize in history is $930 million in cash without taxes. Experts say big winners should first hire a lawyer, a financial consultant and a tax expert before going on a spending spree. Otherwise, you risk joining a notorious bunch of past-winners who frittered away their fortunes and have wound up broke, divorced, or even killed. If there are no winners Wednesday night, the jackpot for Saturday’s drawing will be an estimated $2 billion with a cash value of $1.24 billion, lottery officials said. 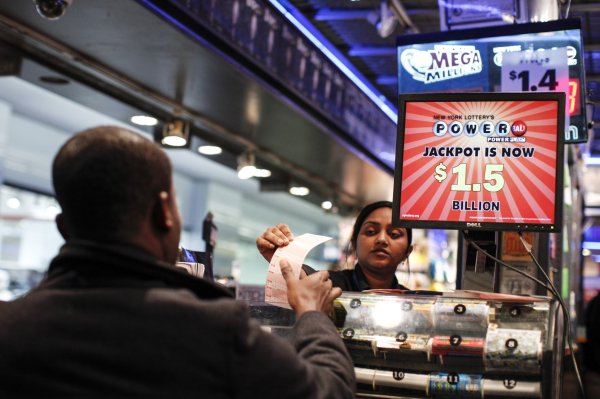 How to Watch the $1.5 Billion Powerball Drawing Live
Next Up: Editor's Pick