At a Monday night forum in frigid Iowa, Bernie Sanders was asked a simple question by Fusion journalist Jorge Ramos: Was his 2005 vote for legislation that protected gun makers from lawsuits a mistake?

The answer was far less simple. “No,” Sanders said. “Like many pieces of legislation, like many of the 10,000 votes that I cast, bills are complicated.” He then added that while the vote was not a mistake, he was willing to revisit the law and “take a new look” at it. “It is complicated,” Sanders repeated in conclusion.

For a week now, Hillary Clinton and her allies have been hammering Sanders on the vote, making the case that he is a failed progressive champion on the crucial issue of gun control. She has called into MSNBC to make the point, blasted reporters with press releases, had her campaign host conference calls, and even put up paid messages to drive home the point.

One of her super PACs, Correct the Record, has so far only attacked Republicans, but made an opening salvo at Sanders on Monday night with video footage of him at the forum refusing to back down from his 2005 vote on the gun industry. “When it really mattered, Senator Sanders voted with the gun lobby and I voted against the gun lobby.” Clinton told MSNBC on Friday. “I’ve raised this issue before, standing next to Senator Sanders. He’s refused to give a straight answer.”

To this, Sanders has not had a clear reply. On the one hand, Sanders has stood by the controversial 2005 law, saying that it was intended to protect mom-and-pop gun shop owners from legal liability. On the other, Sanders has said he might reverse himself in the future, with spokesman Michael Briggs explaining to TIME he would likely support legislation holding large manufacturers liable—all while still shielding the local dealers in Vermont Sanders wants to protect.

The 2005 bill that Sanders supported gave legal protection to gun manufacturers and dealers, shielding them from liability for a wide range of conduct in federal and state court. It prohibits lawsuits that result from criminal misuse or legal misuse of firearms. It does allow lawsuits against dealers who knowingly sell firearms that can be used to commit violence.

Sanders’ campaign manager Jeff Weaver minimized the Clinton attacks, saying that her aides are simply grasping because of Sanders’ rise in recent polls, which includes recent surveys that suggest he is winning New Hampshire and even possibly pulling ahead in Iowa. “This is an issue that was out there. They’re just trying to re-dredge it up when it’s already been addressed,” Weaver said in an interview. “They are distorting his strong record of supporting gun safety legislation, because frankly, they’re worried.”

Sanders has explained that he is worried about small gun shops in Vermont being sued because one of the people they sold a gun to committed a crime with their weapon. But there were limits to his desire to protect gun stores. During the forum with Ramos on Monday night, Sanders said, “If you are a gun manufacturer who is selling guns into an area and you’re selling a whole lot of guns, and you have reason to believe that a lot of those guns are not meant for people in that area, but are being distributed to criminal elements, should you be prosecuted? Damn right.”

Clinton has brought gun control to the center of the Democratic primary this year. Her aides and allies believe that strong action on gun safety is a winning strategy in both the Democratic primary and a general election. Clinton has called for a “national movement” to take on the NRA and outlined a bevy of gun control proposals, a marked departure from her tepidness on the issue eight years ago. In 2008, Clinton attacked then-Sen. Obama in the primary for his gun control platform, sending negative mailers out to Indiana voters accusing Obama of being weak on guns.

Clinton has accrued several related endorsements, including on Tuesday the Brady Campaign to Prevent Gun Violence. Gabrielle Giffords, the former congresswoman who was shot in an attempted assassination and is now an advocate for gun safety, endorsed Clinton earlier this week.

Clinton has also criticized Sanders for voting against the Brady Bill five times in the 1990s, which required universal background checks for gun sales. She has pointed at his 2009 vote in favor of allowing guns on Amtrak trains and his vote against closing loopholes like the Charleston loophole, which allowed Dylann Roof to purchase a gun before the shooting.

More stories about Sanders’ past with guns have been unearthed, including comments shortly after the Sandy Hook shooting in which Sanders said gun manufacturers should not be held liable for what “a deranged person does.” Clinton’s allies have pointed out that the National Rifle Association called the 2005 gun liability bill that Sanders voted for what NRA chief Wayne LaPierre called “the most significant piece of pro-gun legislation in twenty years.” 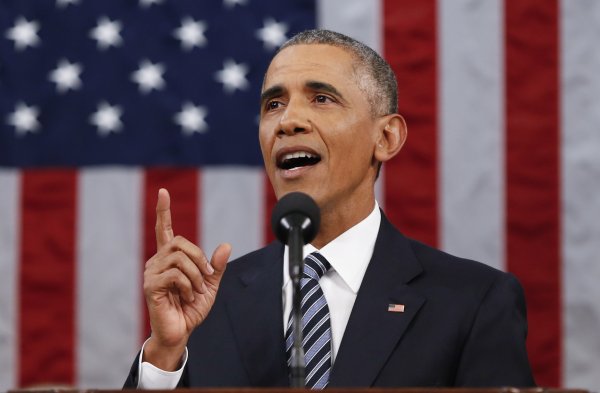 The Most Unorthodox Idea From the State of the Union
Next Up: Editor's Pick