This Is What Happens to Elephants After They Retire

The elephants that have long entertained Ringling Bros. circus crowds will be out of a job this May—but they won’t be out of a home.

After the elephants retire this May, as part of a planned phase-out in response to animal welfare concerns, the creatures will finally get a chance to relax at Ringling’s Center for Elephant Conservation in central Florida.

The 200-acre-ranch already houses 30 elephants, according to a National Geographic profile, and will soon accept Ringling’s currently performing pachyderms. The creatures mostly live in relaxation, not subject to performing tricks or being ogled by tourist onlookers. They get daily baths and regular pedicures, and the females often get a chance to roam the grassy expanse. The male elephants, which are more aggressive, are penned in 1-acre sand lots during the day. At night, the animals sleep in massive barns and are fed after they’re tethered with an ankle chain. Ringling spends about $65,000 per year to maintain each elephant.

Keeping the elephants happy and healthy isn’t pure altruism, though. Ringling continues to breed additional elephants at the conservation center, according to National Geographic, and has plans to eventually put them on public display at a tourist destination. The company also continues to use bull hooks, controversial instruments that can be used to prod or control the animals but may cause pain. The creatures are also being studied as part of cancer research because they develop cancer at much lower rates than humans.

Ringling’s Florida facility is not the only location that houses retired circus elephants. An animal sanctuary in California, run by the Performing Animal Welfare Society, is home to at least nine elephants, as well as other circus animals such as tigers and bears. The sanctuary includes habitats containing “hills, large oak and other native trees, grass, rocks, native brush as well as lakes, ponds and pools” for the elephants to roam in, according to the PAWS website. Similar sanctuaries exist in Tennessee and Arkansas. 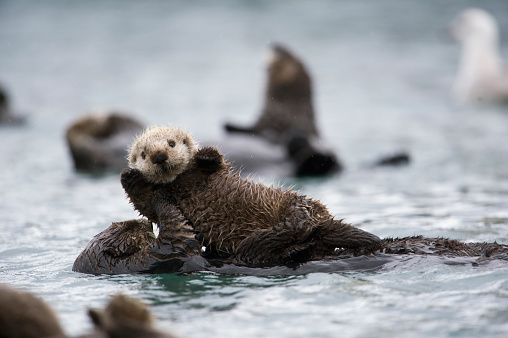 Watch an Adorable Newborn Otter Fall Asleep on Top of Her Floating Mom
Next Up: Editor's Pick