Why This Democrat Won't Vote for Hillary Clinton

Caitlin Flanagan is a Contributing Editor to The Atlantic

The aspect of feminism that affected me on the most powerful, personal level was the idea that when a woman came forward to report that she had been raped we would believe her — publicly and unanimously. I knew what it was like to have a man try to force sex on me; I knew what it was like to arrange my work life so that I could avoid the boorish men who made vulgar sexual remarks in the office.

I was always amazed—dazzled—when women were brave enough to come forward and tell others what had happened to them. For years, I’d been too ashamed to tell even my friends about the things I’d experienced. But now, if we all stood together, the force of our public belief in one another could change things. And it did. And it was exciting and big and important.

I was proud, then, to use the word “feminist” to describe myself. I remember watching the Anita Hill trial in 1991 and burning with indignation at what the committee members were putting her through. I believed her about Clarence Thomas then, and I believe her now: how humiliating it was for her to describe the shaming things that man had said to her. The men on that committee relished making her go through those details over and over again, just as men have done to the women who tell the truth throughout history as a way to humiliate them so deeply that they stop talking, and give up.

I was excited about Bill Clinton’s campaign, and I voted for him. I could not have been less concerned about Gennifer Flowers, who showed up in a press conference to announce she’d been his Little Rock mistress. I don’t care about the private, consensual sex lives of my elected politicians, nor do I care about those of my dentist, accountant or plumber. The nature of the Clinton’s marriage wasn’t my business. Plus, I was then involved in work for abused children, an area to which Hillary had devoted much of her working life. The Clintons seemed to me to be hugely impressive people.

But then I heard about Paula Jones, who came forward with a very different story — of the ugliest type of workplace sexual harassment. I was shocked and I was disgusted, and I believed her. I assumed we all believed her. Wasn’t that how we were changing the country for victims of these kinds of acts?

Immediately I was told by my lefty friends and by the lefty press that I was foolish, that I was naive, that I didn’t understand politics. Immediately this woman—who had come forward to describe a hideous event—was shamed as a big-haired, no-class hick who was telling a lie for financial gain.

It turned out that even radical feminists around would easily believe a woman could lie about sexual harassment for personal gain.

There was an exception to believing everyone that I hadn’t grasped right out of the gate. We were going to choose whom to believe.

Based on the politics and political power of the man accused.

If a man’s politics—not his personal behavior, his politics—were deemed to be pro-woman, his accuser would be subject to doubt, and to forensic levels of investigation and titanic public ridicule—even from other women. It turned out that if you dragged a $20 bill through a trailer park, a bunch of lying sluts would show up to grab it.

I voted for Clinton again. Because I was starting to become a little less naive. And because the stock market was rocking, and because when I had a C-section, my insurance paid for four days in the hospital instead of two, which was a special gift to me from Bill Clinton. He was always good with women that way—he knew how to reach into the most intimate moments of a female voter’s life and make her grateful to him. Bill had dragged a four-night hospital stay through a nice neighborhood in Santa Monica, and I had darted out of my duplex apartment to grab it.

But then I saw Juanita Broaddrick tell her story, and I had a physical reaction. In 1999, she described his visit to her hotel room and the sex he forced on her. I sat in my living room watching her describe that rape and I thought: “She’s telling the truth.” My response was not considered; it was visceral. If it’s possible that one woman can listen to another woman tell her story of rape and just sort of know that she’s telling the truth, I had that reaction.

But by then, I had learned to doubt. By then I had learned to ask questions I never had asked about rape victims before. Why had she waited so long to tell the story publicly? Why had she chosen that particular moment? Why did small details not add up? What did she stand to gain from telling it?

The Clinton machine taught me to ask those questions of rape victims.

What did Hillary know, and when did she know it? She must have known a lot, and she must have known it early on. She knew that the kind of women who vote for Democrats care about three or four huge issues—abortion above all—and that if you stay on the right side of those three or four issues, much will be forgiven, or overlooked, or disbelieved. In short, Hillary understood politics, at its most base and distasteful level.

And everyone knows—they’re just crazy.

Now young Democrat women voters have been handed this whole sorry mess to sort out. As a group, they tend to have a low opinion of people who marginalize and ridicule women who report sexual assault. Ditto people who promulgate the ugly old notion that women are likely to lie about rape if they can find a way to profit (emotionally or financially) from it. But will these young women risk a Republican presidency so that they can send a loud message about discrediting rape survivors? Or will they grow up and accept the nasty business of politics?

According to the New York Times, Lena Dunham is one young woman who’s seen the bigger picture. In public, she’s a vocal Hillary supporter—a smart-bomb directed right at the happening young women Clinton needs in the tent. But in private, says the Times, she knows exactly who—and what—she is endorsing. At a recent, private dinner party—held in a plutocrat’s Park Avenue penthouse, as far from the trailer park as you can get—she supposedly admitted that she was “disturbed” by the Clintons’ treatment of women who came forward in the 1990’s. (Dunham’s spokesperson said the quote was a “mischaracterization” of her comments.)

I’m not taking any chances.

But I won’t vote for a candidate who helped “destroy” the credibility of women who came forward to report that they had been preyed upon sexually by a powerful man. This year, for the first time in my voting life, I’m staying home. 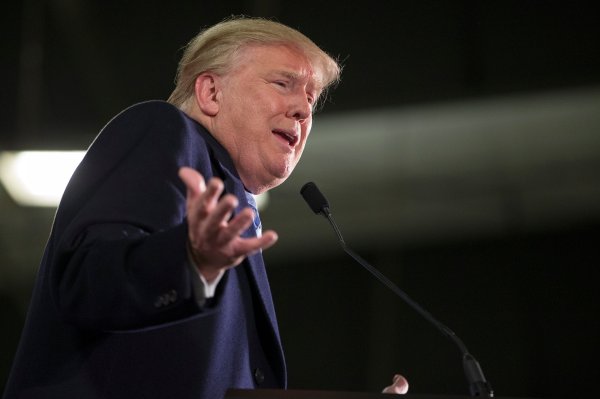 Donald Trump Is a Mother’s Nightmare
Next Up: Editor's Pick