David Bowie, the genre-defying musical legend who died unexpectedly Sunday, had a long list of accomplishments from albums to acting roles. As it turns out, he was pretty great at designing ridiculously cool cars, too.

Back in 1999, London’s Design Museum marked the 40th anniversary of the iconically British Mini with a celebrity design contest. Among the entrants was Bowie, who designed the above mirror-plated Mini. It’s so perfectly easy to imagine The Thin White Duke rolling up to a concert in this, twisting and contorting to secure his escape.

Back to the Future's DeLorean Isn't the Only Awesome Retro Car 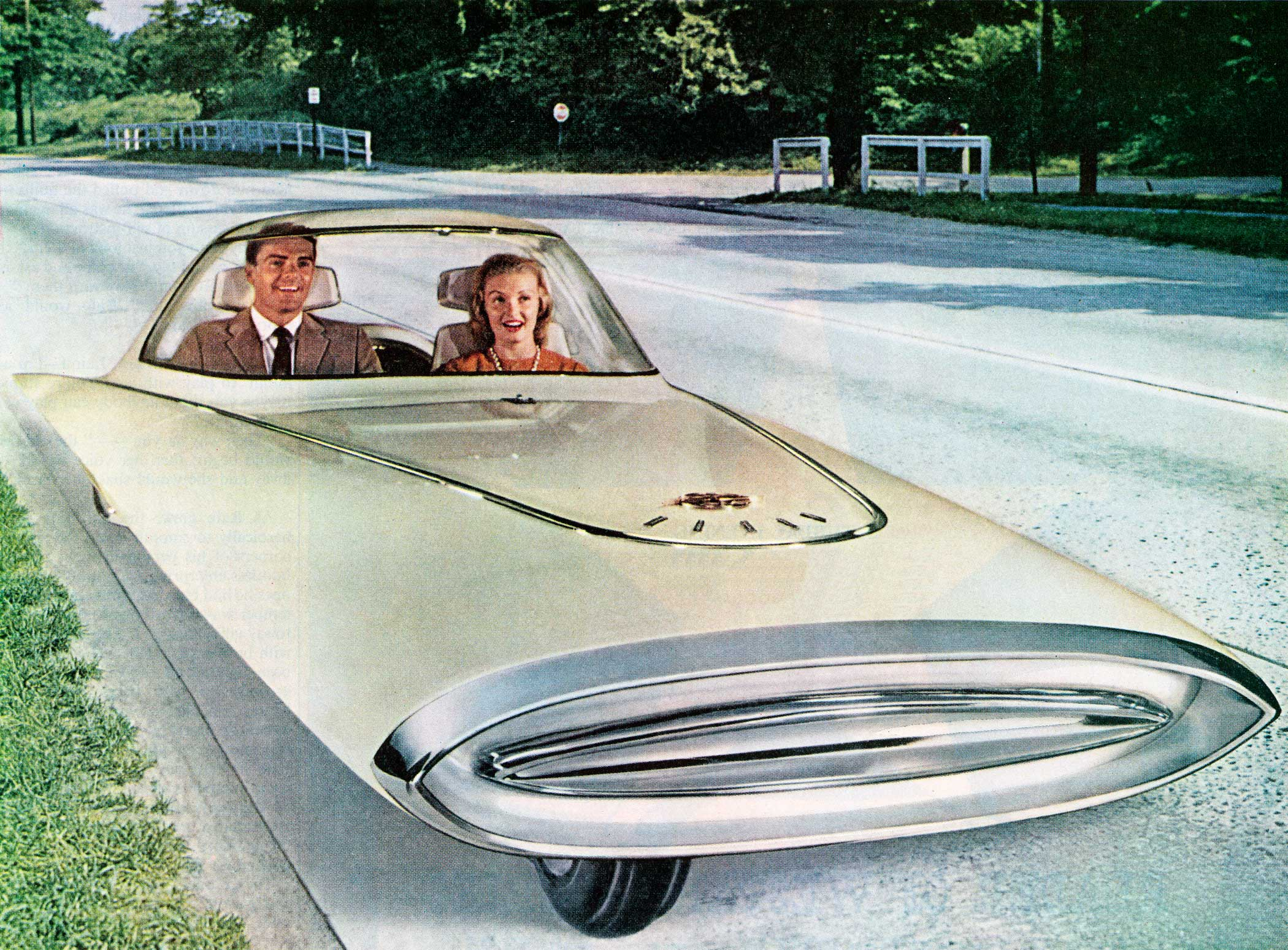 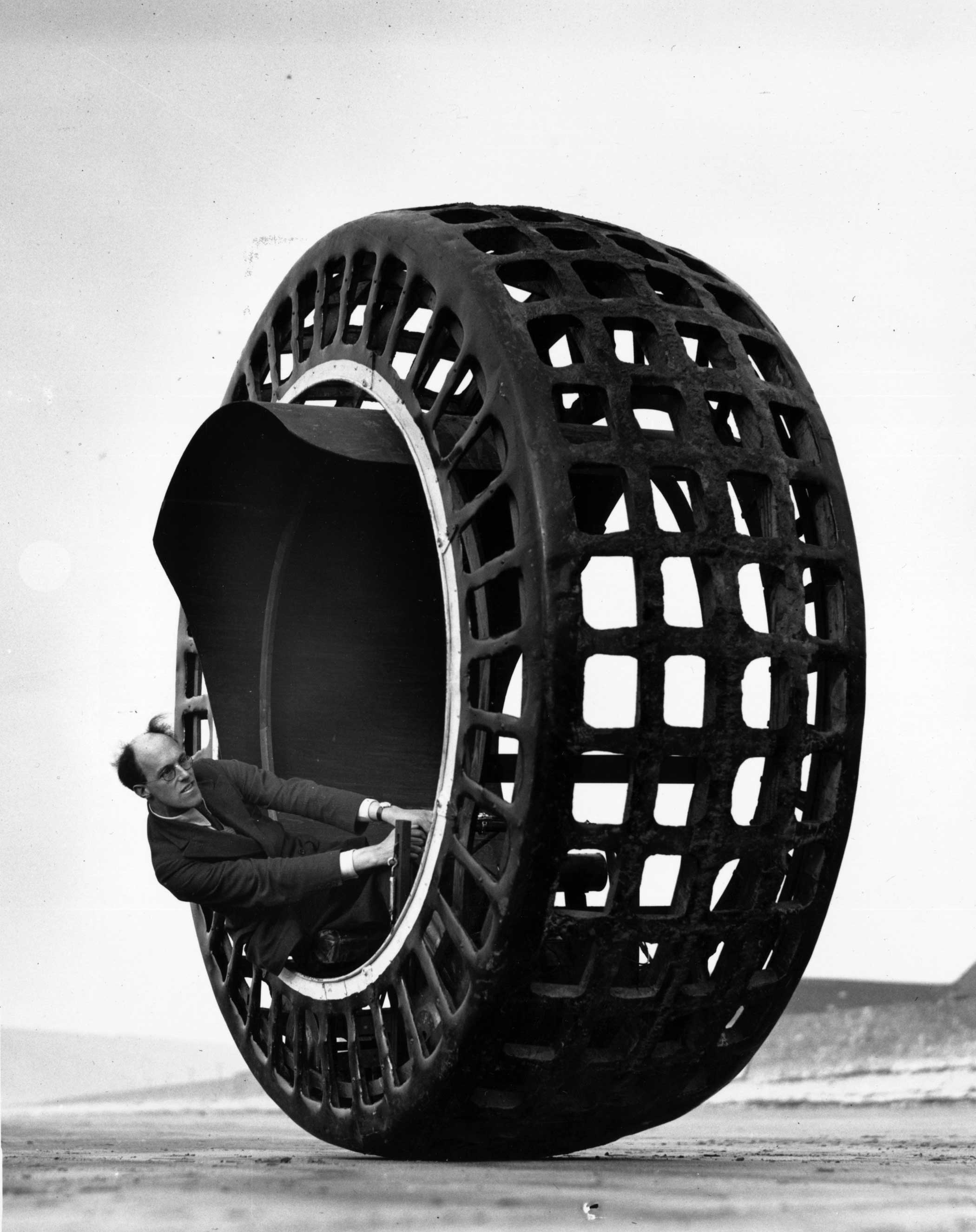 The Dynasphere, an electrically-driven wheel, capable of speeds of 30mph, being tested on the beach at Weston Super Mare by Mr J. A. Purves of Taunton, who invented the machine with his son.
Fox Photos/Getty Images 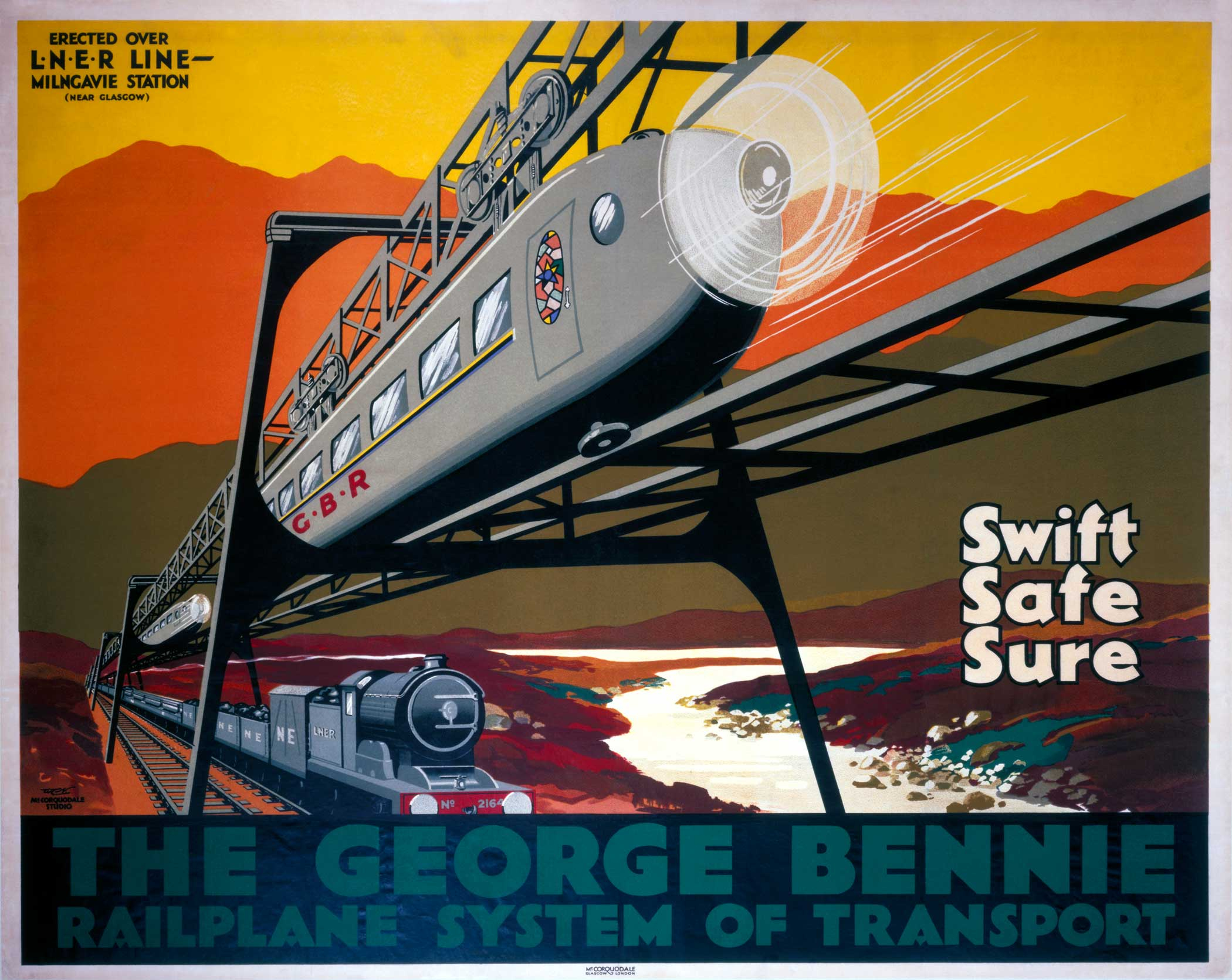 The George Bennie Railplane System, a suspended monorail for passengers set above the existing railway with a LNER locomotive traveling underneath. The project, funded by George Bennie, was set up at Burnbrae, near Milngavie, Scotland as an experiment. It was dismantled in 1956.
WCN/McCorquodale Studio/SSPL/Getty Images 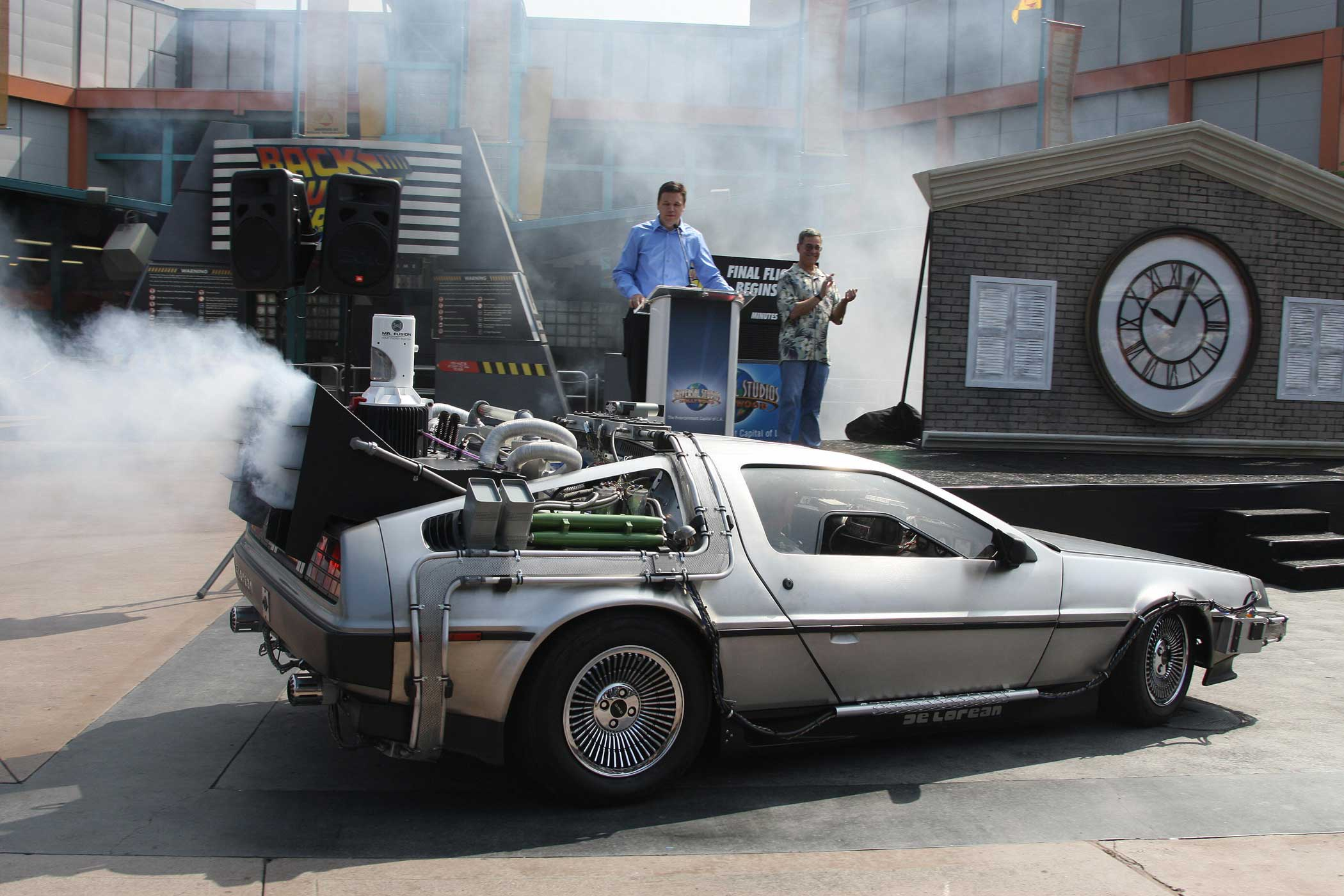 Actor Christopher Lloyd (in passenger seat) arrives in a DeLorean car at Universal Studios Hollywood's "Back to the Future - The Ride" in University City, California on Aug. 7, 2007. Lloyd, who portrayed Doc Brown in the 1985 film "Back to the Future," made the appearence to mark a month-long countdown to the closure of the 14-year-old ride.
Robyn Beck—AFP/Getty Images

Vintage illustration of a futuristic American family on vacation, with the father driving his wife and two kids in a flying saucer instead of a car, 1950s.
GraphicaArtis/Getty Images 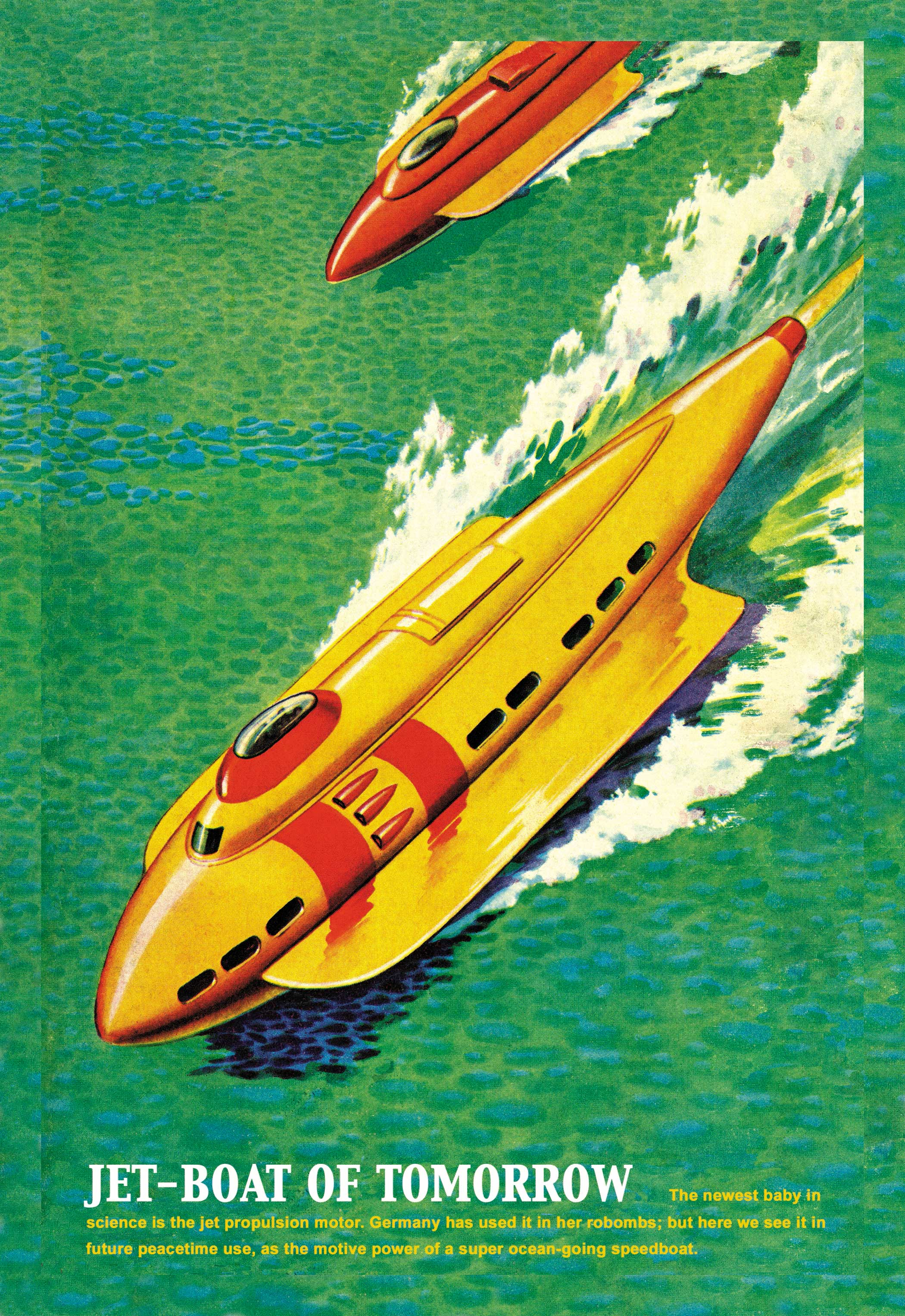 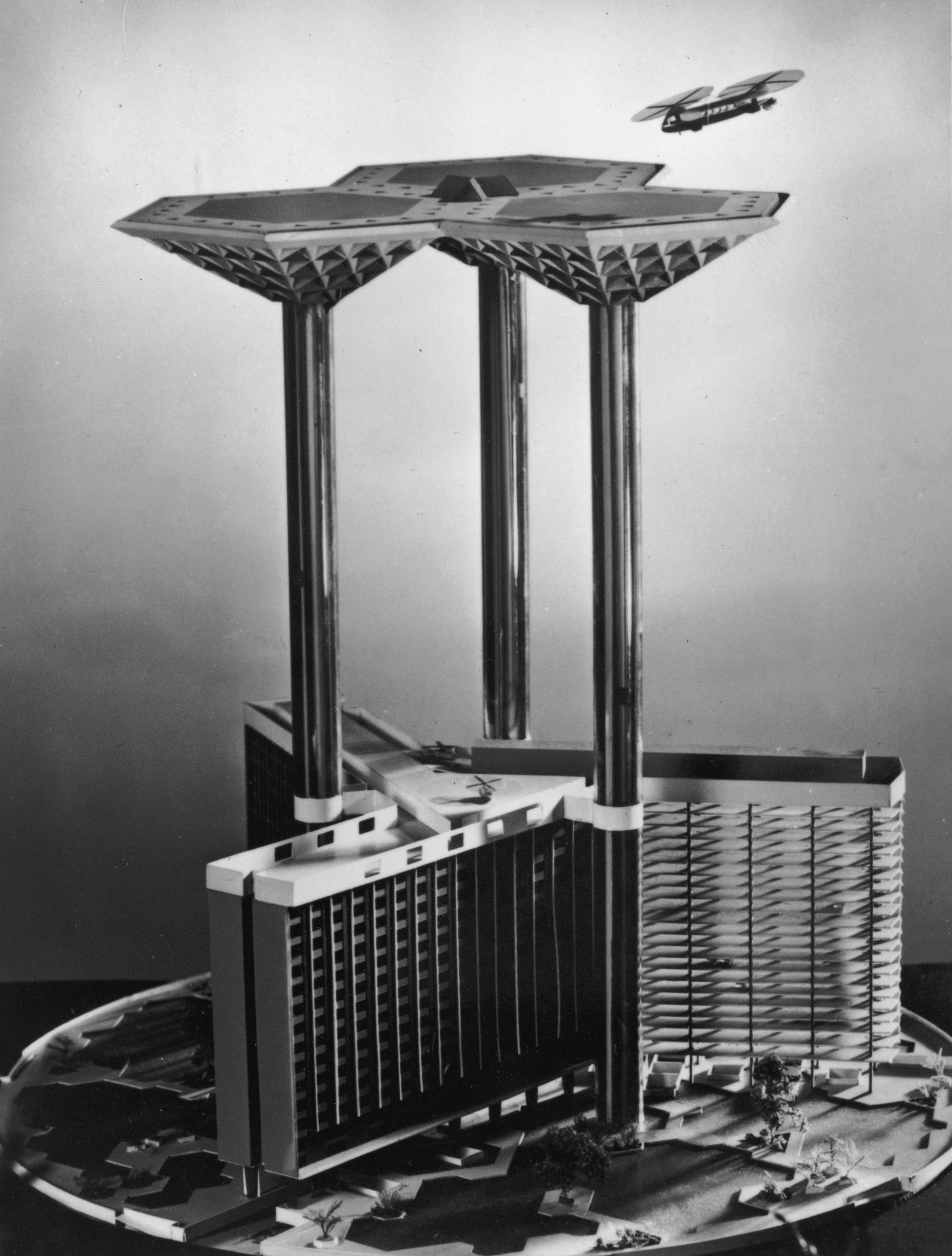 Architect James Dartford designed this model of 'Skyport 2000', a futuristic proposal for an airport in the year 2000. The model shows how aircraft could land and take off from a giant platform supported by three glass-clad pillars. These would contain lifts carrying passengers down to a hotel, offices, and parking for private planes and cars.
Keystone/Getty Images 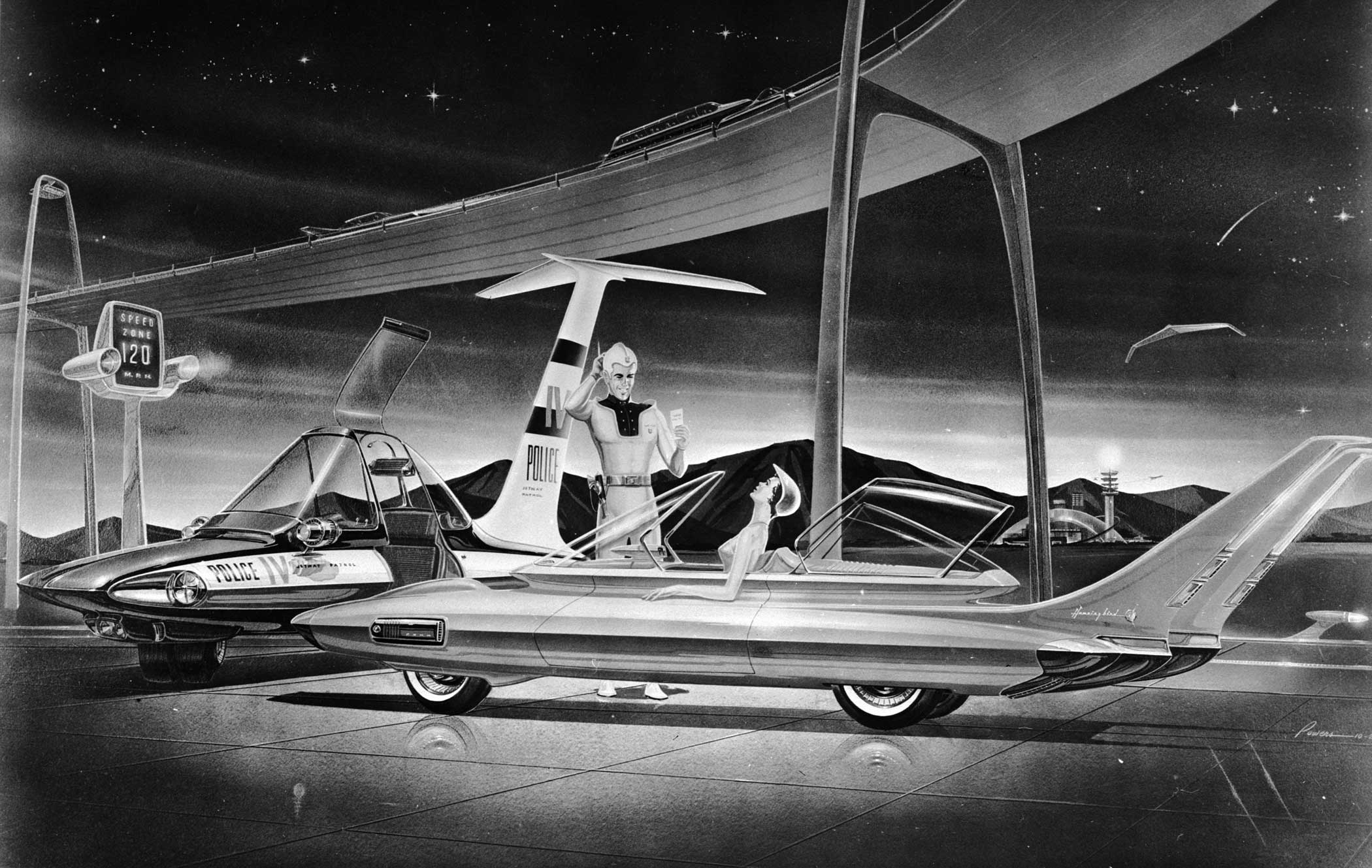 An artist's impression of the future circa 1958 of the automobile: a vehicle that easily draws the attention of the police for exceeding the 120mph speed limit.
Evans/Three Lions/Getty Images 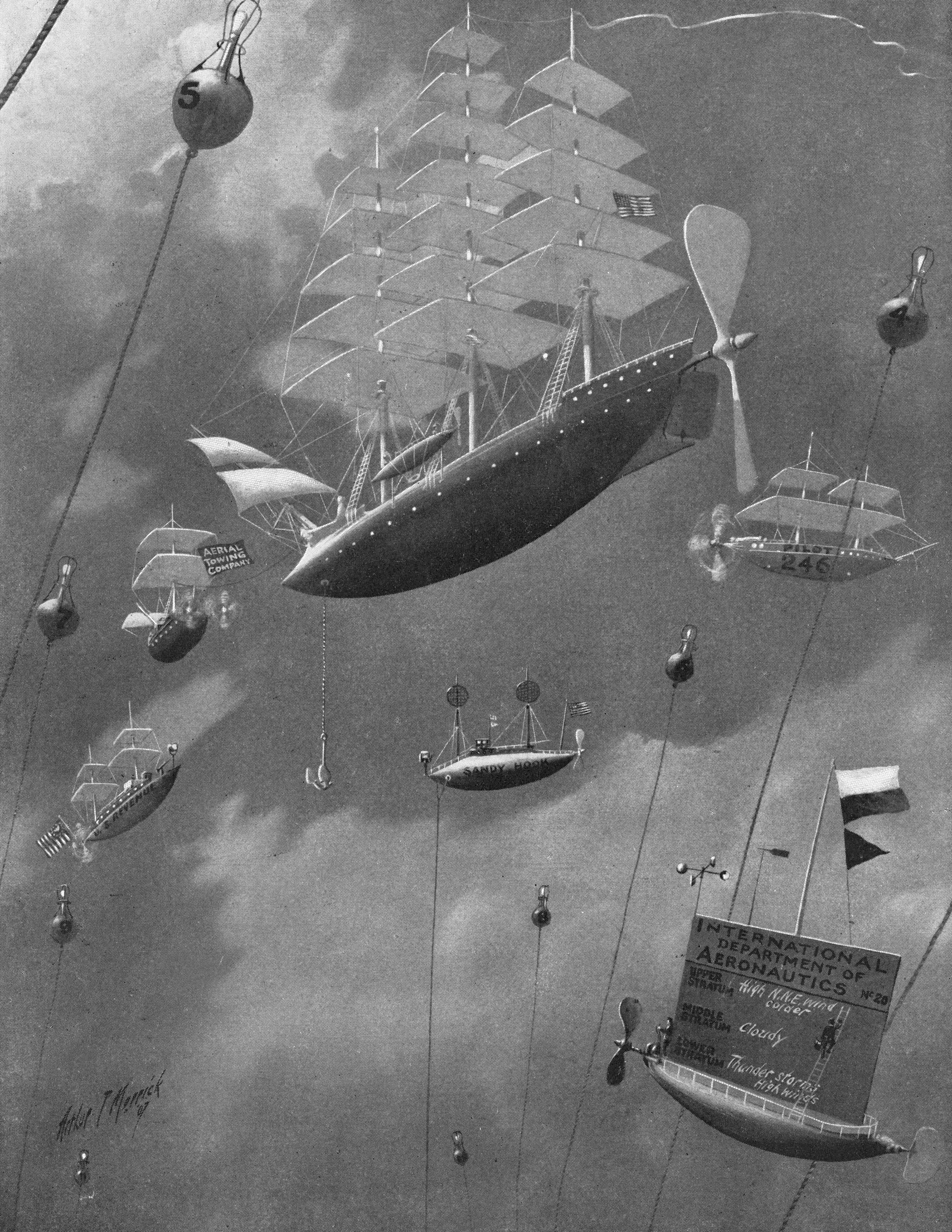 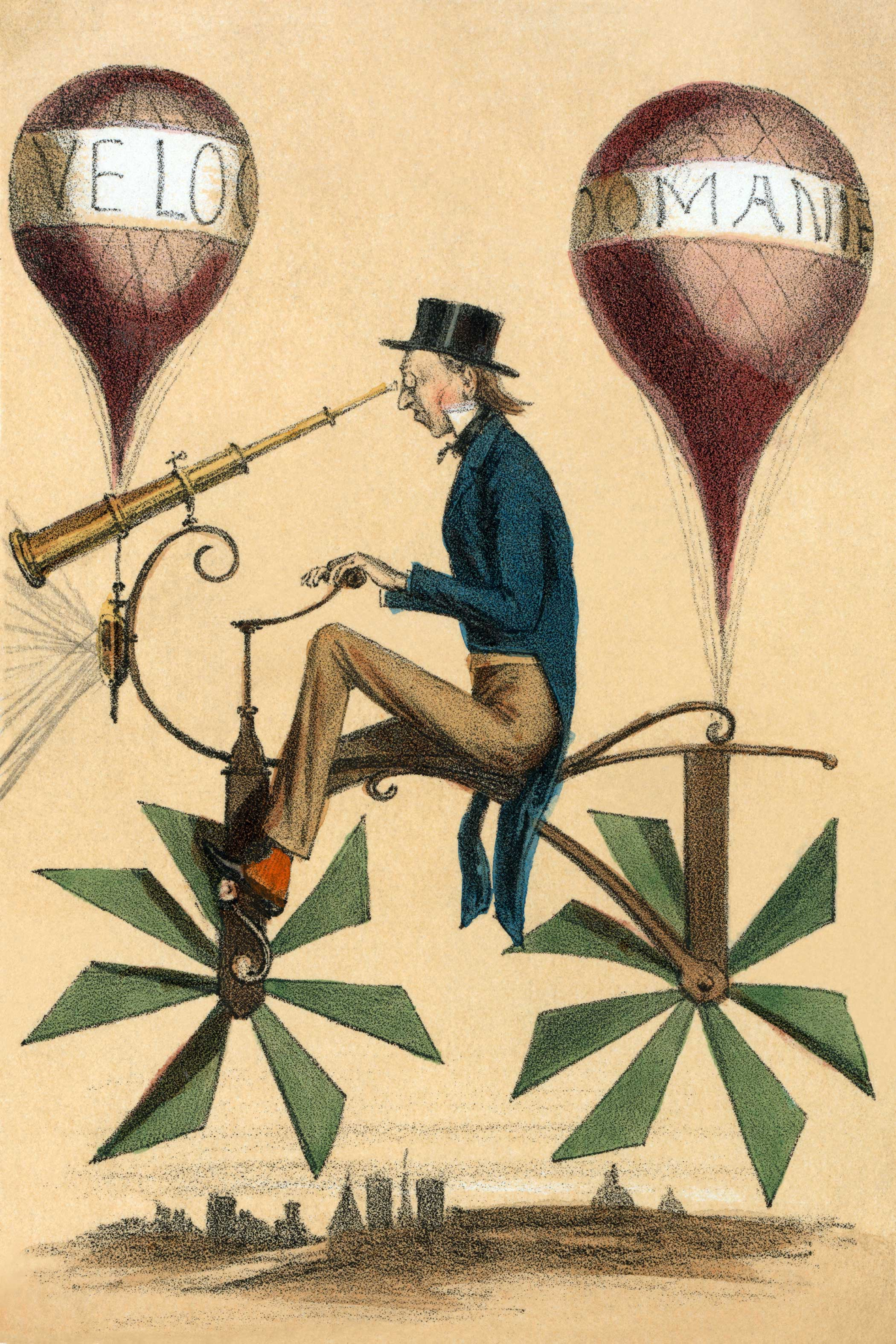 French cartoon shows a man riding on a bicycle-like flying machine while looking through a telescope attached to the front circa 1867. Two balloons, "Velocipedes" and "Domanie," are attached at front and rear as are propeller-like wheels.
Buyenlarge/Getty Images 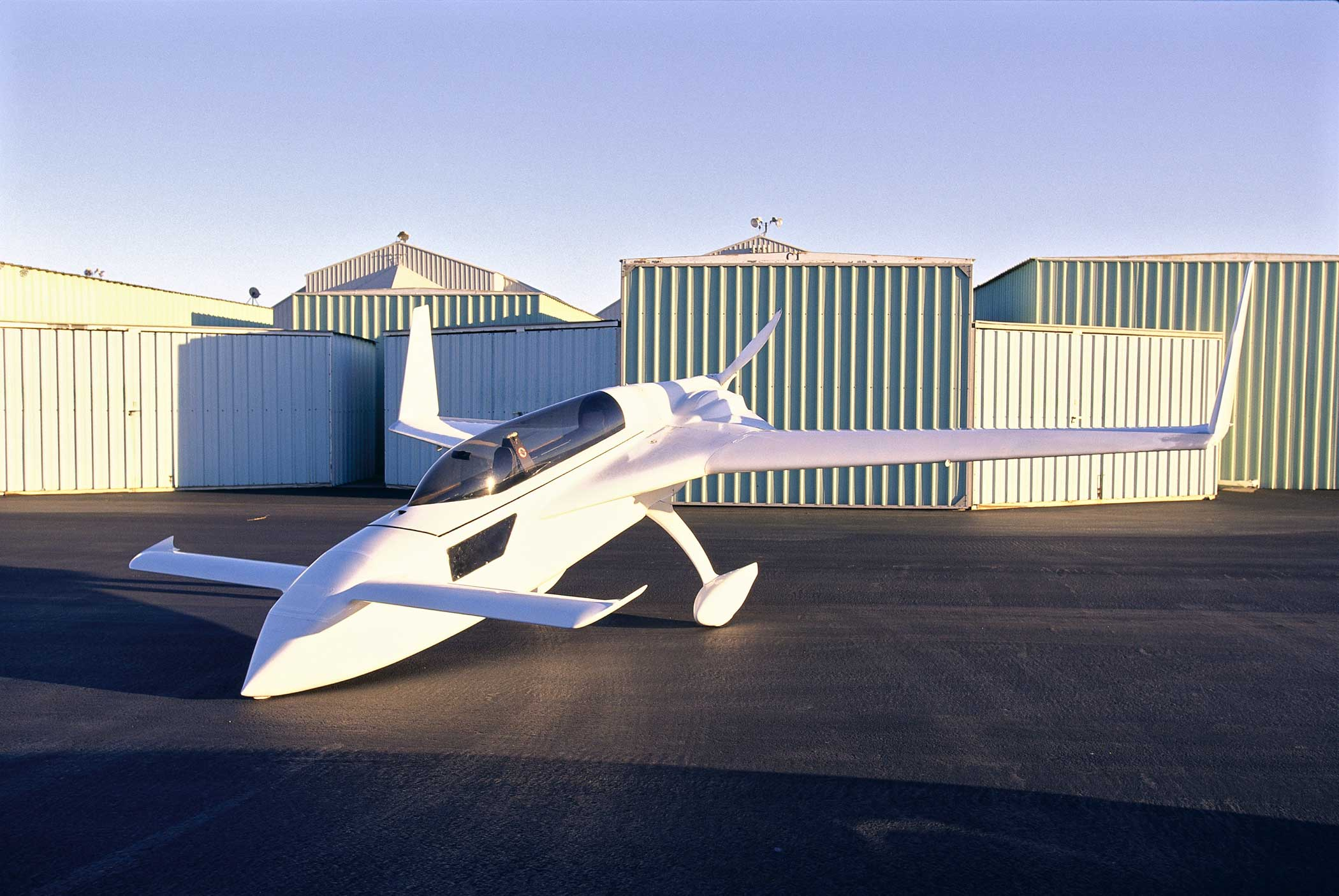 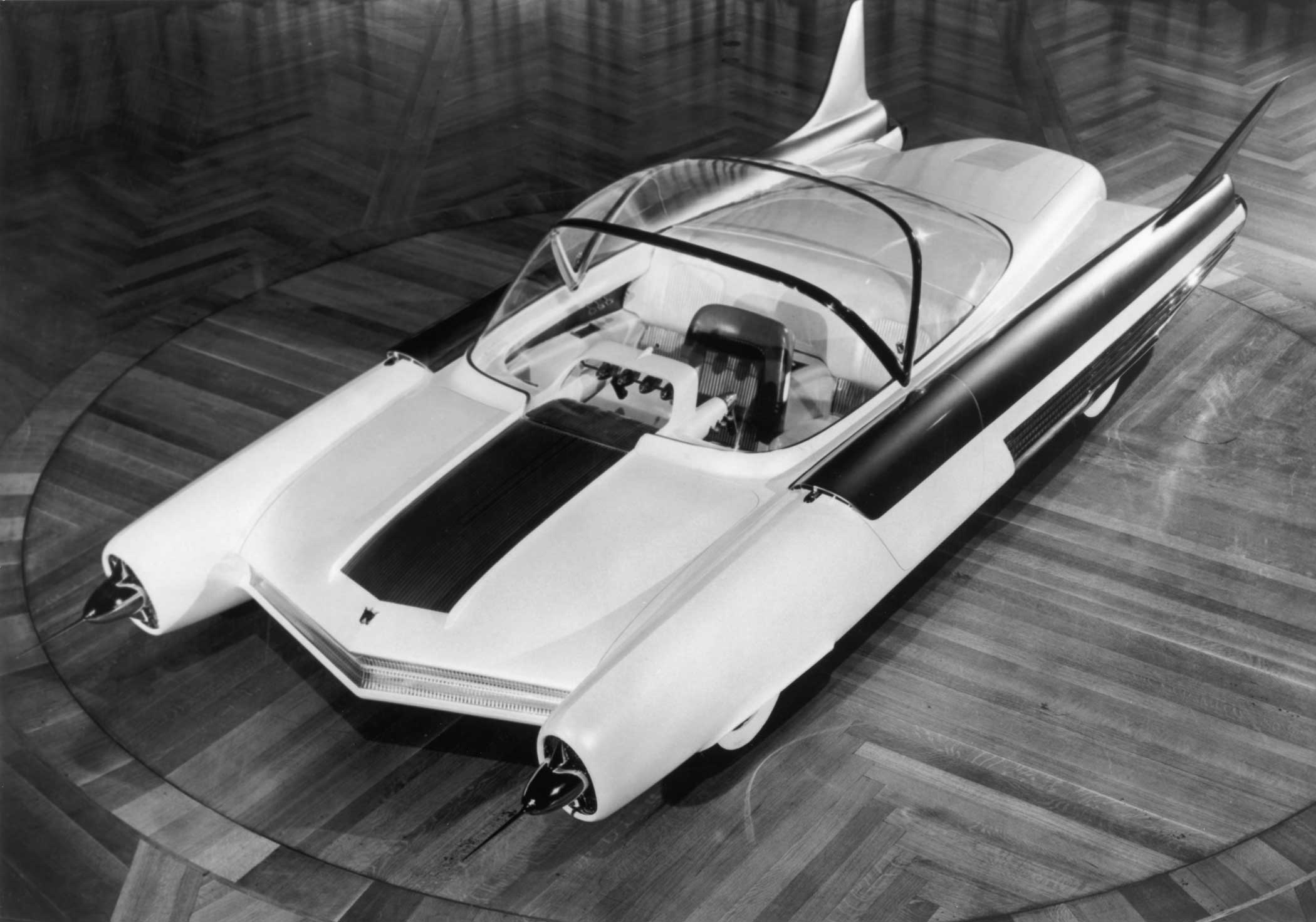 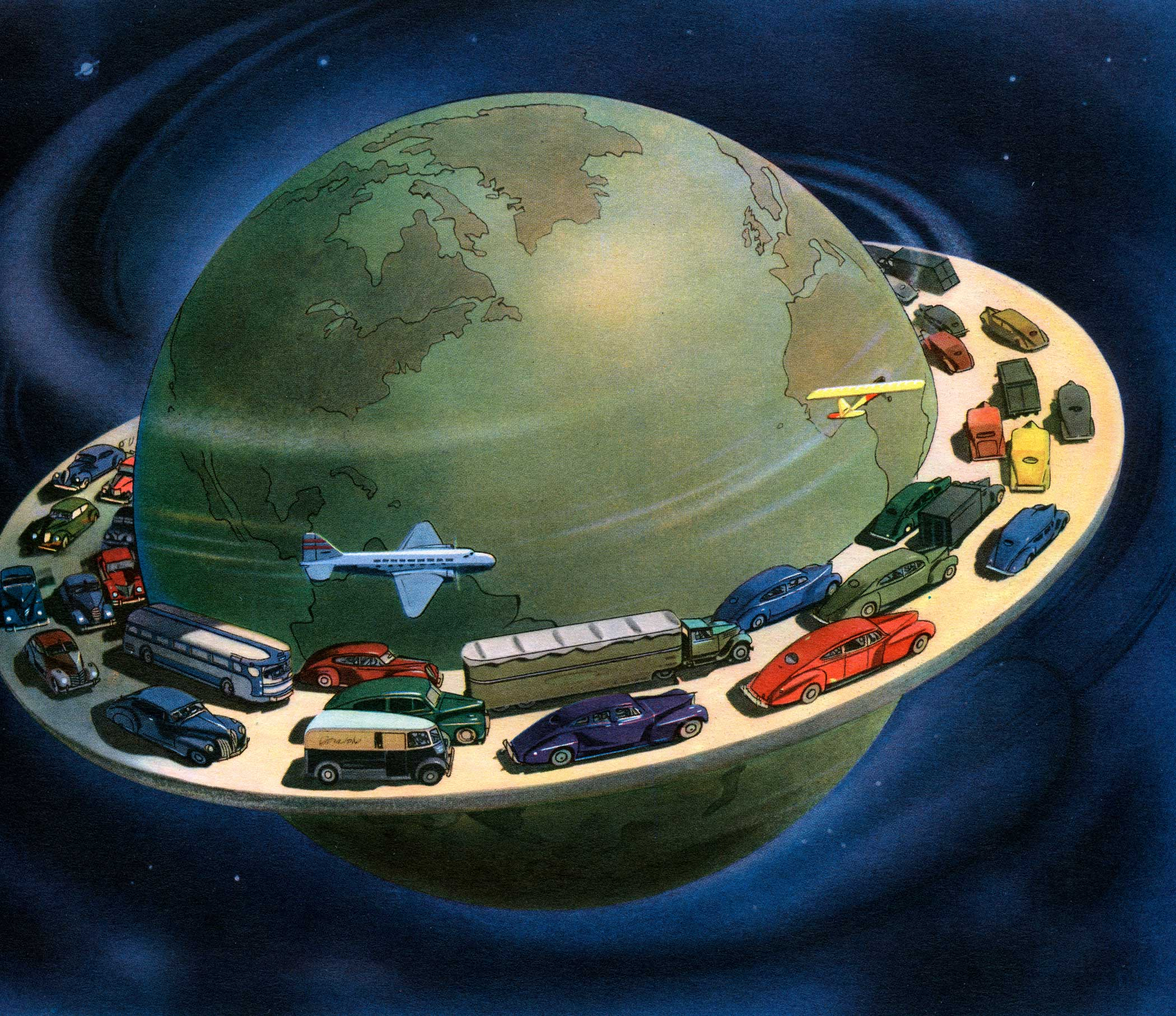 Vintage illustration of a globe surrounded by cars and planes driving on a highway around its circumference, 1941.
GraphicaArtis/Getty Images
1 of 13
Advertisement