Sandy Hook Parents: How We Honor Our Daughter's Memory

Charlotte's Litter Inc.
Ideas
By JoAnn Bacon
JoAnn Bacon is the mother of Charlotte Bacon, a 6-year-old who died as a result of the shooting at Sandy Hook Elementary.

The days after my daughter, Charlotte, was murdered at Sandy Hook Elementary school in Newtown, Conn., the public dialogue quickly went to the details of crime, the murderer, gun safety and mental health. For the most part, the victims were forgotten, as were the destroyed lives of their grieving families.

For my husband, Joel, and I, it was important that Charlotte was not forgotten, but it was equally important that we would find a balance of supporting our living son, Guy, and maintaining some privacy. In the immediate days after the shooting, we were acutely aware of how the events were spiraling out of our control. We had no ability to stop the madness while in the midst of funeral arrangements, deep disbelief and shock, and the body-numbing grief that engulfed us. It was apparent even during these early days that the spiral would not end soon.

We became fiercely private. I seldom left the house and was highly suspicious of newcomers and the agendas of individuals and groups in and around my community, state and country. For me, these were impossible days filled with mistrust, deep grief and avoidance. I was also trying to figure out how to mother both my living son and my dead daughter, as I had been certain that I would mother both of my children for the rest of my days. Out of frustration, I began looking for something that would allow us to honor Charlotte and share the things she loved.

It was three weeks after Charlotte died that I returned to the bus stop with Guy. The last time I had put a child on the bus, she did not come home. I was shattered that morning. I spent this first school morning with another mother whose child had also died. We sat shivering, numb, and in disbelief, waiting for our children to return home safely. On that first day back to school, my son was introduced to therapy dogs. These dogs would have a large and lasting impact on our family.

Guy spent much of his school time in the winter and spring of 2013 learning about the dogs that were visiting his school. With pen and paper in hand, he interviewed the dogs’ owners about each dog’s favorite toy, treat, trick, age and breed. He would later use these notes to write his book, The Dogs of Newtown, as way to honor the dogs that gave him so much. For Guy, school was no longer the safe haven it had been; school had become the place his 6-year-old sister was murdered. These dogs were an important part of helping Guy integrate back into school and easing his anxiety.

Inspired by the help these dogs provided, and Charlotte’s deep love for dogs, I researched the topic. I learned that therapy dogs were working to help veterans, the elderly and those in hospitals. There was evidence that dogs were useful tools when developing literacy in young students, supporting students with special needs, and helping older students manage their stress and anxiety. I also learned that this resource was not being utilized in most of our nation’s schools. I had set my mind to change that and advocate for the use of therapy dogs in educational settings.

My husband and I founded the program Charlotte’s Litter as a way to share our family’s personal experience and guide educators in implementing therapy-dog programs in their own schools by connecting resources and experienced people. Since the program’s inception, we have seen slow but steady growth in schools choosing to introduce therapy-dog programs. Prospective school opportunities continue to rise as educators become aware of the undeniable benefits.

As another way to share Charlotte, Joel and I also wrote the children’s book Good Dogs, Great Listeners: The Story of Charlotte, Lily and the Litter with the help of award-winning author Renata Bowers. The book was released on Feb. 22, 2015, on what would have been Charlotte’s 9th birthday. It was our birthday gift to Charlotte; she would not be forgotten.

The magnitude of Sandy Hook was so big that victims quickly lost their individuality. To many, our loved ones quickly became known as the “Angels.” Charlotte was not just an angel or the victim of a mass murder; she was our daughter. She was a little girl with never-ending curiosity, a need to explore, an independent streak when it suited her, and a brilliant sense of humor. She also loved dogs, her hair in pigtails, and pink dresses. In the book, we used her beautiful attributes to share lessons about confidence, being a great listener, caring for a pet, and developing a love for reading.

All of these projects were created independently of the other, but complement each other beautifully, and in many ways we feel that Charlotte has orchestrated it all. In our quest to honor her, we found a renewed sense of purpose and the ability to give to others. Each of us—my son, my husband and myself—has found our voice. Our work gives us back the control that was taken from us and allows us to share with others how deep we still love and the depth of our grief. It allows us to continue parenting both of our children. It allows us to determine how Charlotte will be remembered. It allows us to grieve on our own terms. 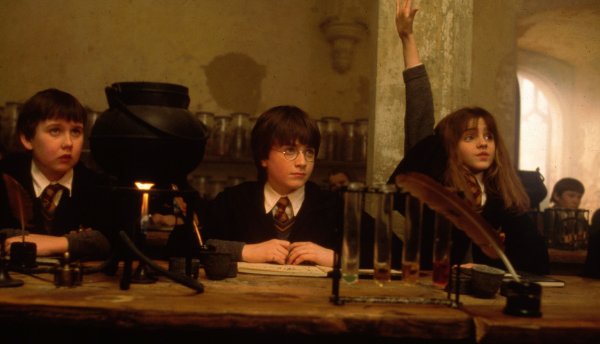 J.K. Rowling Vandalized the Hotel Room Where She Finished Writing Harry Potter
Next Up: Editor's Pick