The Actor, the Kingpin, and Mexico's Drug War as Entertainment

In the low budget action flick El Bazukaco 2 (Big Bazooka 2) the crazed-looking cartel killer pops his head out of the moving SUV on a Mexican road and fires a bazooka, blowing up an enemy gunman. The film was released in 2012 and became an instant hit for fans of the straight-to-DVD genre, known as narco peliculas. Meanwhile, on a real street in Mexico in 2014, a real crazed cartel killer stepped out of a house with a real bazooka. But before he could fire his load, an anti-cartel vigilante shot him dead, his limp finger resting on the trigger.

In Mexico’s drug war, reality and fiction have become intertwined as larger-than-life criminals run wild, while novels, soap operas, movies and even video games create a fantasy version of the conflict. This blur between a surreal drug war on the ground and a wealth of narco fiction reached world attention over the weekend when it emerged that actor Sean Penn drank tequila with drug trafficker Joaquin “El Chapo” Guzman in a mountain hideout before Guzman was recaptured on Friday. Penn’s story on the encounter, along with a video interview, was released Saturday by Rolling Stone to a media eruption. Mexican officials said the meeting helped them track down Guzman, who had escaped prison in a mile long tunnel that itself seemed stranger than fiction in July.

Even before Penn got involved, it was sometimes tough to see where the fantasy ends and the reality begins, with dramatic firefights or prison escapes involving Mexican gangsters with nicknames such as “Shorty,” “The Lord of the Skies” or “The Executioner.” A novel entitled “La Reina del Sur,” or “Queen of the South,” featuring a fictional female drug boss was published before Mexican officials announced that they had arrested a real queen-pin called the “Queen of the Pacific” in 2007. It is hard to know which one inspired the other. In 2009, the cult TV series Breaking Bad showed an IED exploding inside a decapitated head resting on a giant turtle near Ciudad Juarez. The following year, gangsters in the real Juarez dumped a bleeding police officer on a street, before letting off an IED inside a nearby car.

It may have been Guzman who engineered the meeting with Penn, who has himself played real-life gangsters such as the L.A. mob boss Mickey Cohen in the 2013 film Gangster Squad. The drug lord was allegedly working on a new movie production of his own life, and his meeting with the Oscar-winning actor was brokered by Mexican actress Kate del Castillo, who played “La Reina del Sur” in a TV version of the novel, and has been reportedly coordinating with Guzman on the new film. After her drug trafficking role, she controversially wrote sympathetic messages about Guzman. “I believe more in El Chapo Guzman than in the governments that hide the truth from me,” she tweeted in Spanish in 2012. In response, Guzman sent her flowers, according to Penn’s piece, leading to a friendship between drug lord and soap star.

Mexico’s film industry has churned out narco peliculas since the 1980s, when the low-budget movies were on VHS rather than DVD. Today, movies are still often shot in less than two weeks, featuring real life desperadoes, strippers and guns in stories that flick between scantily-clad women and firefights in monster trucks. With names such as The Hummer, Narco War and Massive Extinction, they can inspire up to seven sequels. The down to earth style of the movies is extremely popular in the ramshackle Mexican villages and rough barrios that many traffickers hail from, as well as in migrant communities in the United States. Many of the films have been put onto Youtube, where they win millions of views.

As the drug violence has escalated in the last decade, producers have made films about the true-life killers involved. One such movie is called Comandante Antrax, the nickname of Jose Rodrigo Arechiga, the head of assassins who worked for Guzman. Arechiga was arrested in Holland in 2014, and sentenced in California last year. In some cases, the traffickers have admitted to paying producers to make the films. When Edgar Valdez, alias “The Barbie,” was arrested in 2010, he told an interrogator he paid $200,000 to filmmakers to shoot his biopic.

More recently, the narco world has moved from the low budget flicks to highly-successful TV series, Hollywood films and video games. The final episode of “La Reina del Sur” reached more than 4 million viewers in the U.S. when it aired in 2011. The violence is simulated in video games such as “Call of Juarez: The Cartel.” And the movie Sicario, named after the term for a cartel assassin, took more than $80 million at the global box office when it was released last year.

This latest fictional take on crime bosses has garnered criticism that Hollywood is glorifying bloodshed that claims thousands of victims on Mexican streets. Following the escape of Guzman last year, Mexican Senator Jose Maria Martinez criticized the “narco culture” that elevated the capo. “It is very worrying,” he said. “There has been a creation of false idols who laugh at the penitentiary system and defy the institutions.”

Others say that changing economic conditions and building a better justice system is more important than worrying about what is on television. Guzman himself, in the Rolling Stone interview, blamed poverty for the rise of drug traffickers. “Where I grew up there was no other way and there still isn’t a way to survive, no way to work in our economy to be able to make a living,” Guzman said.

Don Winslow, who has had a novel adapted by Oliver Stone and is set to have another adapted by Ridley Scott, said in a recent interview with TIME that it weighed on his conscience. “Oh my god, do I wrestle with that,” he said. “I think obviously at the end of the day, I tilt toward the side of, ‘By informing people, we are doing good.’ But in the day by day writing of some of these things, I would wonder, ‘Am I tripping across a line?’ And am I simply doing a pornography of violence? Is this just voyeuristic? And I think that those are troubling issues.” 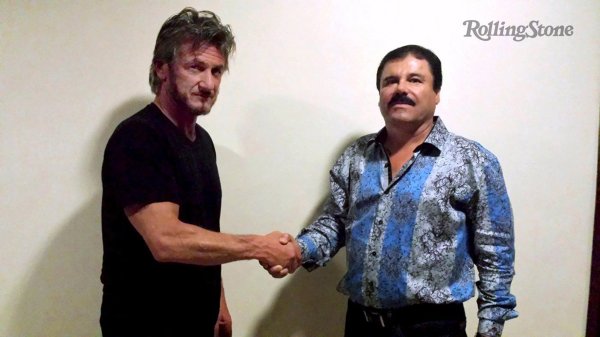 Mexico Wants to Speak to Sean Penn About 'El Chapo'
Next Up: Editor's Pick