Texas Sen. Ted Cruz said Sunday that he does not support the “deportation force” proposed by Donald Trump to kick out 11 million undocumented immigrants, saying the idea doesn’t line up with how American law is enforced.

The Republican presidential candidate set himself apart from the billionaire businessman, telling Jake Tapper on CNN’s “State of the Union” that Trump’s plan to round up undocumented immigrants is “not how we enforce the law for any crime.”

“No, I don’t intend to send jack boots to knock on your door and every door in America,” Cruz said. “Door-to-door, we don’t have any system that knocks on the doors of every person in America. That is not actually how the American law enforcement system works. We also don’t have people going door-to-door looking for murderers. We don’t live in a police state.”

Cruz said law enforcement practices currently in place will find undocumented immigrants who are living under the radar.

“Listen, we have an enforcement force. It’s called border patrol and it’s called Immigration and Customs Enforcement,” he said.

Trump in November pledged to authorize a “deportation force” to “humanely” remove millions of undocumented immigrants from the U.S. 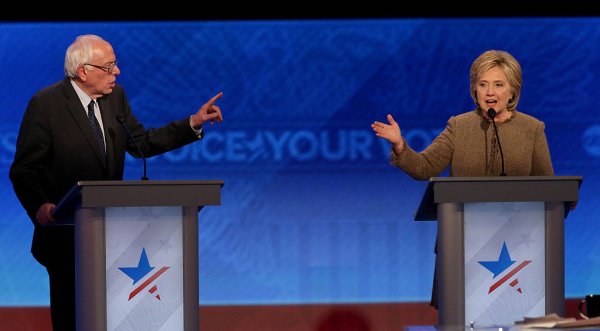 Clinton and Sanders Deadlocked in Early Voting States
Next Up: Editor's Pick