A Muslim woman was removed from a Donald Trump rally on Friday after staging a silent protest in the crowd of supporters.

Rose Hamid, a 56-year-old flight attendant, seated herself behind Trump and stood during the Rock Hill, South Carolina event wearing a blue T-shirt that read, “Salam, I come in peace.” After people around her began chanting “Trump” she was ejected along with fellow protesters, the Washington Post reports.

The protester told CNN that she decided to come to the event because she “figured that most Trump supporters probably never met a Muslim.” Hamid, who was wearing a white hijab, took to her feet after the GOP frontrunner suggested that many Syrian refugees “probably are ISIS.”

She told CNN that while some Trump supporters were sympathetic, others shouted “You have a bomb” or “Get out!”

Trump has come under fire for remarks made about Muslims during the campaign, in particular his December demand that members of the religious group be banned from entering the United States.

“This demonstrates how when you start dehumanizing the other it can turn people into very hateful, ugly people,” Hamid told the network. “It needs to be known.” 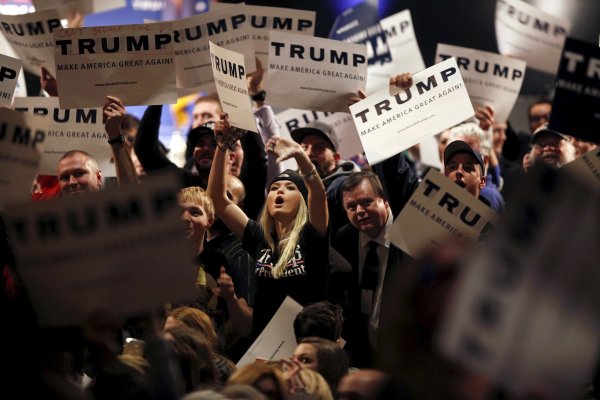 Trump Bans Undecided Voters From Rally
Next Up: Editor's Pick