When Paul Ryan was the GOP’s vice presidential nominee in 2012, he was repeatedly stymied by Mitt Romney aides when he wanted to give a speech on poverty.

Now, three weeks before the Iowa Caucuses, Ryan, who has become Speaker of the House, is having the last word. On Saturday, in South Carolina, he hosted seven leading GOP presidential candidates for in an in depth discussion of the issue that is most near and dear to his heart.

Ryan, a devotee of Jack Kemp, the football player turned congressman, Cabinet Secretary and GOP anti-poverty crusader, said he hopes to use 2016 to help the GOP offer affirmative policy solutions after years of fighting with the Obama White House. And amid a primary season that has stood out for its rancor and rejection of substance, the forum—one of his highest profile events since taking the gavel in October—was one of his most significant attempts at doing just that.

“It says a lot about Speaker Ryan that one of his first major public events features him using his leverage to convene this discussion,” said John Lettieri, the co-founder of the Economic Innovation Group, a nonpartisan think tank backed by Silicon Valley that co-sponsored the event. “It’s a clear sign that he’s trying to lead the GOP in another direction.”

The event featured Chris Christie talking about his parents’ poverty and Ben Carson Recalling his own experience growing up poor. “As a kid growing up in poverty, I hated poverty,” Carson said. “Some people hate rats, hate roaches, I hated poverty.”

Jeb Bush highlighted his efforts on founding charter schools in distressed neighborhoods in Florida, while Arkansas Gov. Mike Huckabee chimed in on the importance of supporting the less fortunate. “Sometimes what people need is the affirmation that they are people of value,” Huckabee said. “That they are people of worth.”

In 2014, on the 50th anniversary of the War on Poverty, Ryan released his plan to reform the nation’s welfare system, including replacing most federal programs with block grants to states. Similar proposals have been adopted by several GOP candidates, including Jeb Bush most recently on Friday.

The candidates at the event were united in calling for states, rather than the federal government, to take the lead in tackling poverty, in line with traditional Republican values.

“If you leave this to federal government, they swing a meat axe, not a scalpel,” Christie said. Florida Sen. Marco Rubio said the poverty programs as constructed in the 1960s are ill-positioned for the challenges facing the poor in the 21st century.

One area of contrast came from Carson, a proponent of a flat tax based on biblical tithing, who broke with his fellow candidates to call for the elimination of the Earned Income Tax Credit, while his rivals called for expanding it.

The focus on poverty, over traditional Republican tropes like “job creation” and the “middle class,” reflected Ryan’s belief that the GOP must reach out to non-traditional voters in order to win a general election, but it also reflects decades of his own work, which began when he was an aide to Kemp at Empower America. Ryan credited his mentor’s inspiration in his 2012 convention speech. “What gave Jack that incredible enthusiasm was his belief in the possibilities of free people, in the power of free enterprise and strong communities to overcome poverty and despair,” Ryan said. “We need that same optimism right now.”

Arthur Brooks, the president of the American Enterprise Institute, another co-sponsor of the event, credited Ryan with moving the GOP to embrace an often-overlooked issue.

“Paul Ryan is the intellectual leader of the Republican Party, at least among politicians,” Brooks said. “And certainly until there’s a Republican candidate, he’s effectively the leader of the party. And he’s basically doing the type of things that leaders are supposed to do. He’s setting the agenda, asking about the things he wishes they were talking about, and I think it’s great. It’s the best leadership I’ve seen in a while.”

“They don’t know it yet but it’s incredibly smart politics, because they need to brand the Republican Party as a party that cares about people like you,” Brooks added of the Republican candidates. “If you can really shift five or six percent of the population into a position where they say, ‘this whole thing about Republicans don’t care about poor people, I don’t see that,’ that would be a big, big change.”

“What we’ve learned today is that we’re not just an opposition party, we’re are also a proposition party,” a smiling Ryan told MSNBC host Joe Scarborough on stage, suggesting it was the first step toward a GOP that was more aggressive in reaching out to all voters. “Wouldn’t you rather both parties compete for your vote no matter who you are, where you live, or what zip code you’re in?”

Former 2016 presidential candidate and South Carolina Sen. Lindsey Graham, who has critiqued the GOP’s rhetoric on poverty in recent years, said the focus on the poor has the potential to open electoral doors for the GOP. “The fact that Paul Ryan…is talking about this makes me encouraged,” he said. “I think this issue can help us.”

The policy-heavy forum offered a starkly different tone than the series of Republican presidential debates, which have frequently devolved into personal shouting matches. Ohio Gov. John Kasich said he’s been pushing for more such events as opposed to debates, “so people can see who you are.” Republican presidential front-runner Donald Trump and Texas Sen. Ted Cruz were among the invited candidates who skipped the Kemp forum.

“Too often what we’ve seen in the debates is the selling of fear,” echoed South Carolina Sen. Tim Scott, the only African-American GOP senator. “Today we overcame that.” 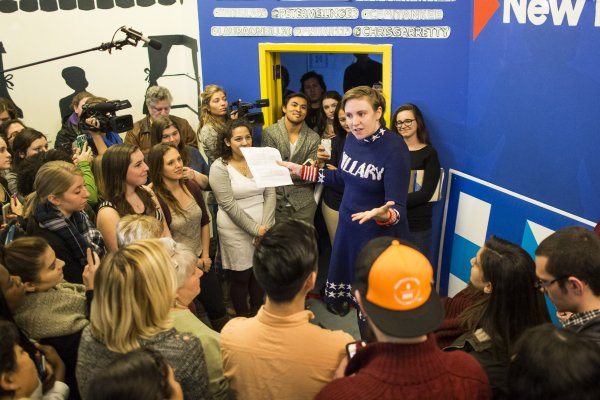