Growing up with drug prohibition, it is easy to think of it as an age-old ban, such as the outlawing of robbery or murder. It seems almost like a law of nature: the earth circles the sun; gravity pulls objects down; and narcotics are illegal—facts of life, pure and simple. But scholars have shown that prohibition is a late-blooming policy that has always been tainted by discord, disagreement, and disinformation.

The basic challenge of drug policy is tough: the majority favor certain recreational drugs, such as alcohol, which causes death and addiction. Doctors and soldiers need other narcotics, such as opiates. Meanwhile, people from poor and broken communities are hammered by addiction to any mind-bending substances they can get their hands on.

But debate over drug laws has been clouded by emotive, unscientific forces, including racism. Weird myths become accepted truths. In the early days, American newspapers claimed that the Chinese used opium to systematically rape white women and that cocaine gave Southern Negroes superhuman strength. More recently, we have heard about generations of deranged subhumans called crack babies, or that LSD makes people think they can fly.

Amid fears of moral collapse, doctors and scientists are drowned out. Shouting at the forefront is one of the great crusaders of modern times: the drug warrior. Politicians soon realized the drug issue was a useful platform, in which they fight an evil, alien force that can’t answer back. They look both tough and moral and win support from that crucial group, the concerned middle class.

The father of American drug warriors is Hamilton Wright, appointed U.S. opium commissioner in 1908. An Ohio native, Wright was influenced by puritanical beliefs and sharp political ambition. He made his job a personal crusade to protect good Americans against a foreign menace and was the first person to envision the United States as leader in a global campaign to stop drug use. To later drug warriors, this made him a visionary; critics see him as starting policy on the wrong foot. Wright rang the alarm bells of an epidemic in a 1911 New York Times interview, under the headline UNCLE SAM IS THE WORST DRUG FIEND IN THE WORLD. As he told the Times:

There was indeed rising opium consumption in Wright’s day, with an estimated one hundred thousand to three hundred thousand American users. Such a number is significant, but at about 0.25 percent of the population pales in comparison with contemporary drug use. While some “dope fiends” puffed opium in dark dens, many got hooked from doctors’ prescriptions.

Wright was also concerned about another drug gaining popularity in the early-twentieth century: cocaine. He collected police reports on African-American cocaine use and pushed the angle the white powder was whipping uppity blacks into a frenzy. The story played big in the press. Among numerous articles about cocaine-crazed Negroes, the most infamous was printed in the New York Times in 1914. The piece of inflammatory racism is regrettable, verging on self-parody to modern readers. Under the headline NEGRO COCAINE ‘FIENDS’ NEW SOUTHERN MENACE (a certain eye-catcher with your Sunday coffee), the piece opens with a rant about cocaine-crazed blacks murdering whites. It then follows with a spectacular tale about a police chief in North Carolina facing a black on blow:

A cocaine-crazed Negro turning into the Incredible Hulk! Chinamen using their foreign poison to seduce white women! It certainly rattled the white establishment. Wright finally got thirteen nations to sign an accord to rein in opiates and cocaine in 1914, and in December of that year the U.S. Congress passed the daddy of American drug laws: the Harrison Narcotics Act. It was not totally prohibitionist, aiming to control rather than wipe out drugs. A certain amount of legal opiates would be needed for medicine as they are today. But the Harrison Act did create an immediate black-market trade in opium and cocaine. El Narco was born.

Back in Sinaloa, it didn’t take long to do the math. An unruly state, poppies in the mountains, and an illegal opium market 360 miles to the north. It was an easy equation: Sinaloan poppies could be turned into American dollars.

Chinese immigrants and their descendants had the vision and connections to kick-start Mexico’s first drug trafficking. Over decades, they had grown into a community that spread from Sinaloa up to cities on Mexico’s northwest border. Most were bilingual in Spanish and Mandarin and had Mexican Christian names. The list of early arrested traffickers includes Patricio Hong, Felipe Wong, and and Luis Siam. The Chinese built a network that could harvest the poppies, turn them into gum, and sell the opium to Chinese dealers on the U.S. side. As the British had defied Chinese prohibition, so the Chinese would defy American law.

The vast Mexican-U.S. border was ideal for trafficking—a problem that has confounded American authorities for the last century. It is one of the longest borders on the planet, stretching two thousand miles from the Pacific at San Diego to the Gulf of Mexico at Brownsville. The Mexican side has two major metropolises: Ciudad Juárez, smack in the middle of the line; and Tijuana (reportedly named after a madam of prostitutes named the Tía Juana). Many migrants in these cities are from the Sierra Madre states of Sinaloa and Durango, creating family links between the border and bandit mountains.

The border also boasts a dozen medium-size Mexican towns, including Mexicali, Nogales, Nuevo Laredo, Reynosa, and Matamoros. In between cities are vast stretches of wild land running through deserts and arid hills. Over the years, everything from ceremonial Aztec skulls to Browning machine guns to white tigers have been smuggled over the line in the sand. The first batches of opium slipped over the membrane like water through a sieve.

Excerpted from El Narco: Inside Mexico’s Criminal Insurgency by Ioan Grillo. Reprinted with permission of Bloomsbury. All rights reserved. 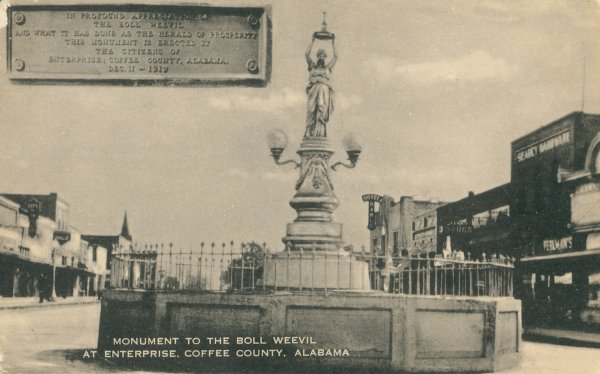 The Beetle That Helped Alabama Adapt to a Changing Environment
Next Up: Editor's Pick